FIRST DRIVE | The 2021 Hyundai Santa Fé is different but good 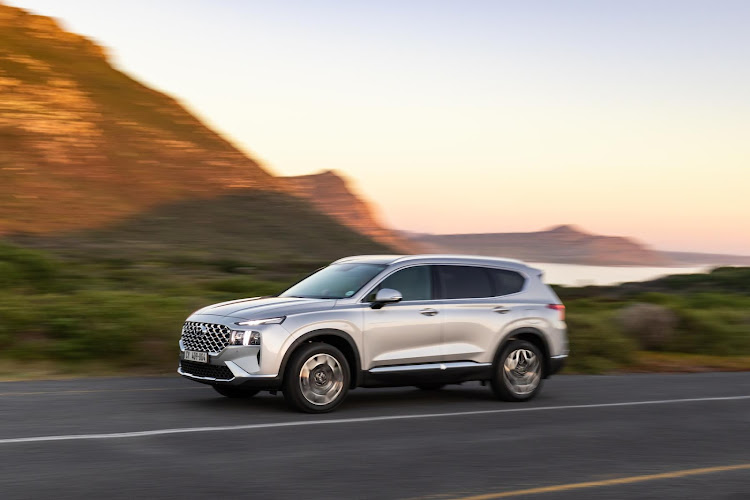 Even its makers concede that the Hyundai Santa Fé is somewhat difficult to accurately place in the market.

Yes, it is obviously a large, family-sized sport-utility vehicle, but which models would one identify as organic and direct rivals?

The South Korean carmaker shuns a like-for-like comparison (although the related Kia Sorento would be a good one) and instead describes it as an alternative to two camps.     First up, you have your traditional, ladder-frame-underpinned offerings. Think Ford Everest, Isuzu MU-X, Mitsubishi Pajero Sport and Toyota Fortuner.

And then there are the plusher, premium contenders such as the Audi Q5, BMW X3, Lexus NX, Mercedes-Benz GLC-Class and Volvo XC60. They are smaller in size and do not offer seating for seven.

The Hyundai is priced comfortably in the realm of either segment, at R769,500 for the Executive and R869,500 for the grander Elite. At the launch of the revised model in Johannesburg last week, we got acquainted with the latter grade. 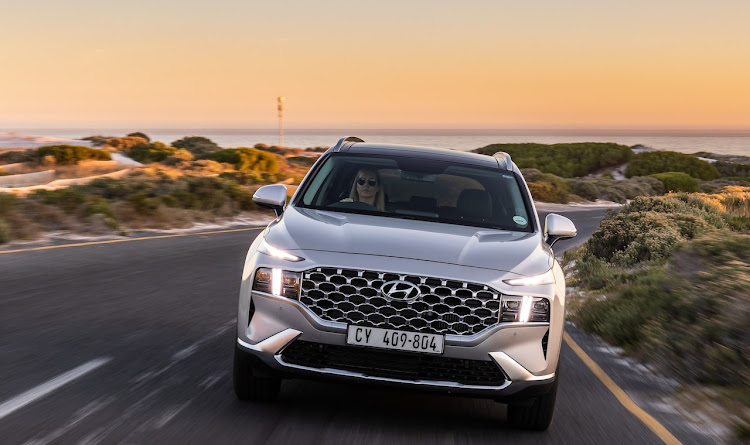 Fearsome new grille is a trademark feature of the 2021 Santa Fé.
Image: Supplied

According to Hyundai, the refresh is more significant than to warrant the usual facelift descriptor. On the subject, we really should address that face! It might not be to all tastes. But while the current design language of manufacturer is not one that would attract adjectives like pretty or subtle, the approach sure is bold.

A fearsome grille takes centre stage, flanked by LED-illuminated fangs. Much like the smaller Kona crossover, this has tiny slits for eyes, quite serpent-like in appearance.

The bumpers fore and aft were reshaped and new taillights are in a design style that would not look out of place on a model from an earlier-mentioned, upscale Japanese marque. Both the Executive and Elite get different alloy wheel patterns, 18-inch in diameter for the former vehicle, while its swankier sister gets 19-inch footwear – with a 20-inch as an option.

An average person would immediately size it up as “big” just from a visual perspective, affirmed when you scrutinise the on-paper dimensions: 1,900mm wide and 1,710mm tall, with a generous length of 4,785mm. A luggage capacity of 643l is enough for most, but flipping up the third row of seats would impinge on that dramatically.

In the main seat of the Elite, the impression of sophistication and high-level quality was strongly felt. Lest we forget, Hyundai does have a dedicated luxury division named Genesis, whose products are unfortunately not marketed locally. So it is fluent in the finer things. And that sense is clear when you notice the materials and fixtures in the cabin of the Santa Fé – although in appearance, it lags behind the slicker, minimalistic cabins of the German set. Occupants will find a button-littered fascia, below an eight-inch touchscreen set-up tacked atop the dashboard. 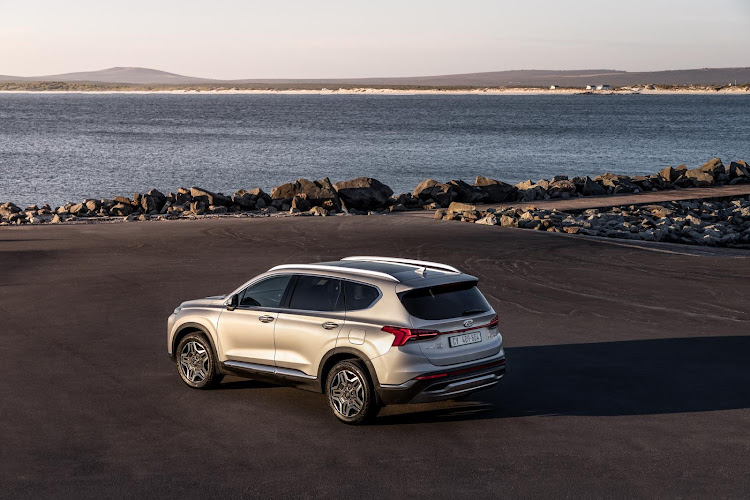 Specification has always been a strong suit for Hyundai and that is no different here.

The chassis has been tautened up, with a revised subframe purporting better performance in a collision, in addition to improved ride and handling. A multi-link rear suspension brings clear supremacy on-road when drawing parallels to the rudimentary, pick-up-based vehicles referenced above.

Just do not expect it to have the same level of competence on the rough stuff as those products, even if all-wheel drive is standard with the Elite. Drive in the Executive is sent to the front axle.

Both derivatives are powered by the same 2.2-litre, turbocharged-diesel, four-cylinder unit. The engine produces 148kW and 441Nm, which represents a 3kW and 5Nm increase vs the motor that fared previously.

In the cabin the gear lever makes way for shift buttons.
Image: Supplied

An eight-speed, dual-clutch automatic transmission is paired with the power source. The firm has joined the rest of its peers in 2021, using shift-by-wire technology, with electronics actuating selection instead of having the lever directly planted to the gearbox.

Engaging drive, park or reverse is now a push-button affair, but steering-mounted paddles feature on both model grades. It is a substantial machine to pilot, tipping the scales at 1,810kg and with a front and rear track of 1,646mm and 1,656mm respectively.

The bulky Hyundai lapped up varying (often poor) road surfaces of provincial back roads without fuss and cruised happily at freeway speeds. True to its family-friendly ethos, this is the kind of vehicle that could be loaded up and nosed down to Cape Town without a second of hesitation.

The claimed consumption figure of 7.9l/100km seems slightly optimistic, but we look forward to seeing what the real-world yield would be during our extended, weeklong evaluation period.

Peugeot is enjoying strong momentum at present. A powerful corporate structure, renewed brand identity and the prospect of fresh product has kept the ...
Motoring
2 months ago

The Swift and SX4 jointly spearheaded proceedings when Suzuki made a re-entry to the South African market more than a decade ago. And while the ...
Motoring
2 months ago