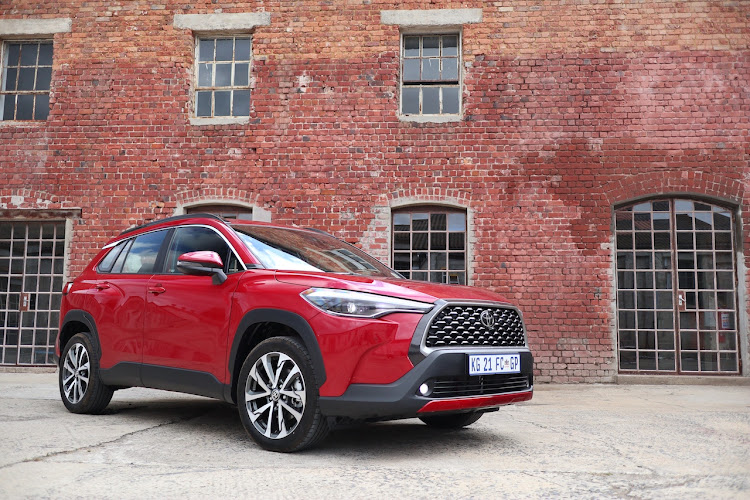 The Toyota Corolla Cross launch was one of the biggest motoring events I have attended in the past seven years. With more than 60 journalists in attendance it was almost like some weird motoring scribe reunion roadshow where selfie-sticked newbies and cynical veterans such as myself mingled and caught up over coffee and squirts of hand-sanitiser.

After the sun slunk behind the Cape Town horizon there was even a guest appearance by Arno Carstens. With guitar in hand the Springbok Nude Girls frontman suddenly entered stage right and proceeded to serenade us all between mains and dessert with relaxed acoustic renditions of 'Blue Eyes' and 'Another Universe' (kind of ironic considering that the latter was once used to score a Volkswagen Touareg commercial). The Corolla Cross had come to town, folks, and the Hype Machine had been cranked all the way up to 11. 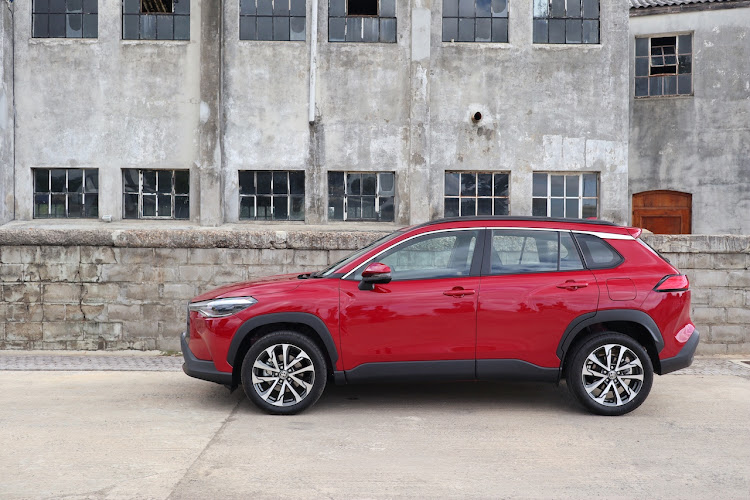 Dapper good looks should appeal to a broad customer base.
Image: Thomas Falkiner

And why not? This is, after all, a big deal for the Toyota brand. Thanks to the advent and popularity of crossovers and compact SUVs, sales of traditional three-box sedans (and even hatchbacks to some extent) have been on the decline. Factor the fleet-baiting Quest out of the equation and this spells trouble for the Corolla nameplate. I mean the latest Corolla Sedan is a fantastic car (I had one on test for three months so I can vouch for this) but you hardly ever see them traversing our roads. So, yeah, enter the Corolla Cross that's not only built at the firm's Prospecton plant but also consists of 40% local parts content.

Thanks to the all media build-up you've no doubt already seen it so I won't spend too much time banging on about its exterior styling. All I'll say is that in the metal, up close and personal, the Cross is a rather nice thing to look at with a design language that straddles a safe middle ground between the visually subversive C-HR and more chunky Rav4. It's inoffensive enough to attract small-town conservatives yet still packs enough flair to appeal to hip young urbanites. Size wise the Corolla Cross measures in at 4,460mm long, 1,825mm wide and 1,620mm tall, making it noticeably larger than the likes of the Volkswagen T-Cross, Mazda CX-3, Renault Duster, Honda HR-V and Ford EcoSport. 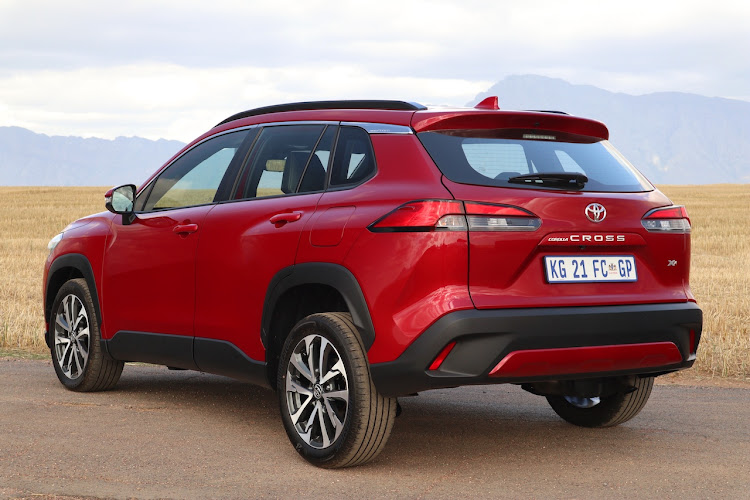 Hoist yourself up into the cabin and you will find that the dashboard is a dead ringer of the one used in the current Corolla Hatch and Sedan — albeit sans the soft-touch slush covering on the top half beneath the windscreen. Still, build quality is up to the usual Toyota standard and everything seems well equipped to deal with a life of road trips and school runs and urban commutes. And no matter which derivative you choose, standard specification levels are generous across the range with all Cross models benefiting from keyless entry, a start-stop button, Toyota Connect, automatic lights and cruise control. 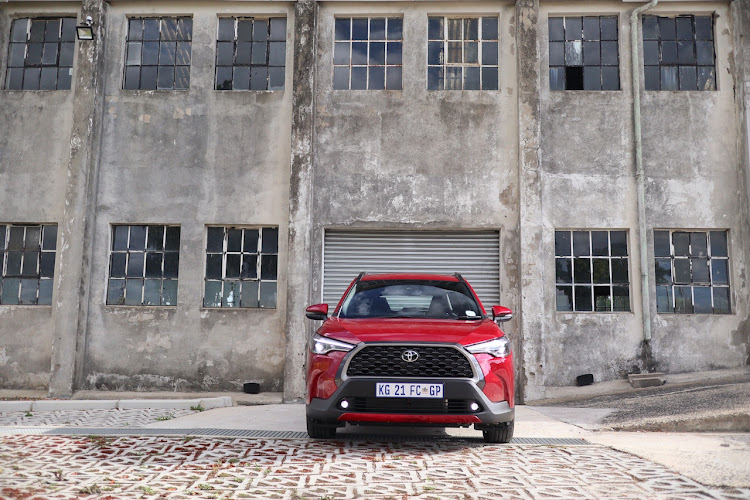 All in all it's a good place to spend time with really comfortable seats (front — I didn't try the rears), excellent all-round visibility and a commanding view of the road ahead. Overall interior refinement levels are comparable to those of its siblings and boot space measures in at 440 litres: 30 litres less than the Corolla Sedan but 146 litres more than the Hatch. This can of course be increased by simply folding down the 60:40 split rear seat backs. Showing that they have a sense of humour, the Toyota engineers have also hidden no less than 24 Corolla Cross logos (aka Easter Eggs) around the cabin for you to track down.

Moving on to the oily bits and the Cross can be ordered with one of two powertrains. First up is a naturally aspirated 1.8-litre four-cylinder petrol engine making a claimed 103kW and 173Nm worth of torque. Paired to a CVT transmission, it's certainly not shooting the lights out in terms of performance but for everyday driving tasks — scooting around town and dragging down the highway — it's perfectly adequate. Fuel consumption wise Toyota claims that it sips 6.8l/100km on the combined cycle but on my 100km+ test route around the Cape winelands I saw an indicated 8.6l/100km — and I wasn't driving all that hard. 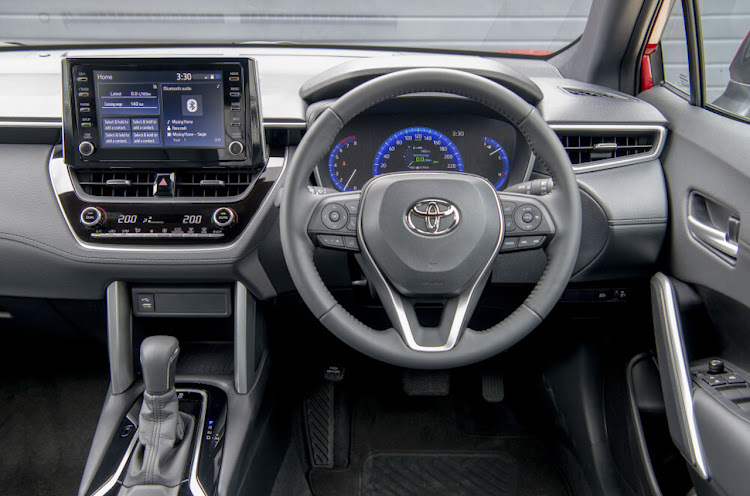 Interior echoes that of the Corolla Hatch and Sedan.
Image: Supplied

Fortunately Toyota is also offering the Corolla Cross with a hybrid powerplant similar to the one doing duty in the Prius. This means that a 53kW/163Nm electric motor is here paired to a 72kW/142Nm 1.8-litre four-cylinder Atkinson cycle engine for a total system output of 90kW. Power is sent to the front wheels via a CVT gearbox and Toyota claims a combined fuel consumption figure of 4.3l/100km — though I managed 5.6l/100km. For my money this is the engine to go for as it is a) not much more expensive, b) lighter on juice and c) endowed with an extra slug of lowdown torque courtesy that hybrid trickery.

Underpinned by Toyota's excellent TNGA-C architecture, both Corolla Cross variants offer up a polished driving experience not too dissimilar to that of the Corolla Hatch and Sedan. Though it's pertinent to point out that while the latter employ a more sophisticated double-wishbone rear suspension, the Cross employs — for the purposes of improved packaging — a more rudimentary torsion beam set-up. Still, for what it is and the type of people who will ultimately buy it, the Cross is easily capable of matching anything else in its class so far as dynamic aptitude is concerned. It rides well too: our test route took us down some pockmarked rural roads, which the suspension soothed with minimal fuss. 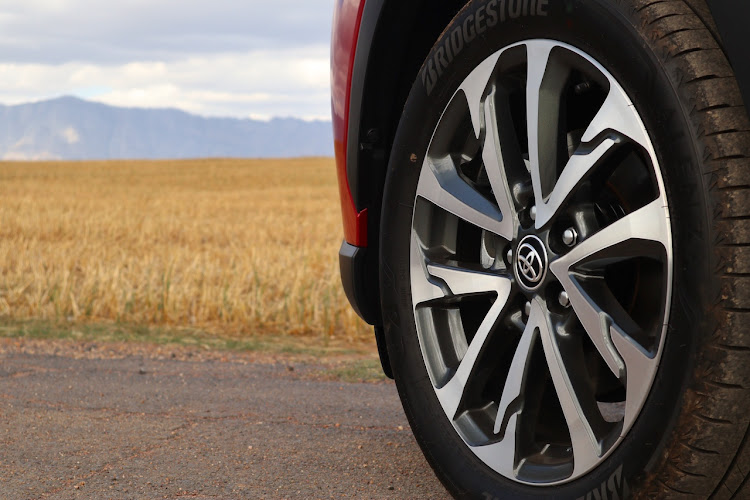 With sales of its siblings in decline, the Toyota Corolla Cross has a lot resting on its shoulders and as such it's crucial that it finds favour with its target market. Toyota is confident that it will and is setting its sights on shifting 20,000 units a year. Optimistic? Maybe. But after sampling the Corolla Cross for a good few hours I've got to say that it carries all the right chops to rake in the sales. From those tidy looks and fine road manners to proven mechanicals and competitive value proposition (you are essentially getting C-segment dimensions paired to B-segment pricing), Toyota has packed in all the requisite ingredients for instant mass appeal. Indeed, if Mzansi is as hungry for crossovers as the marketing data suggests then the new Corolla Cross is going to be gobbled right up.

All models come standard with a three-year/100,000km warranty and 90,000km service plan. Hybrid models carry an eight-year warranty on the hybrid battery.

BAIC is a Chinese brand that started its SA operations back in 2016 and by 2018 had started assembling a semi-knocked down range of cars at its ...
Motoring
6 months ago

Kia is readying an all-new Sportage to take on the likes of the Toyota Rav4, Hyundai Tucson, Mazda 5 and a throng of other medium SUVs. The new ...
Motoring
7 months ago