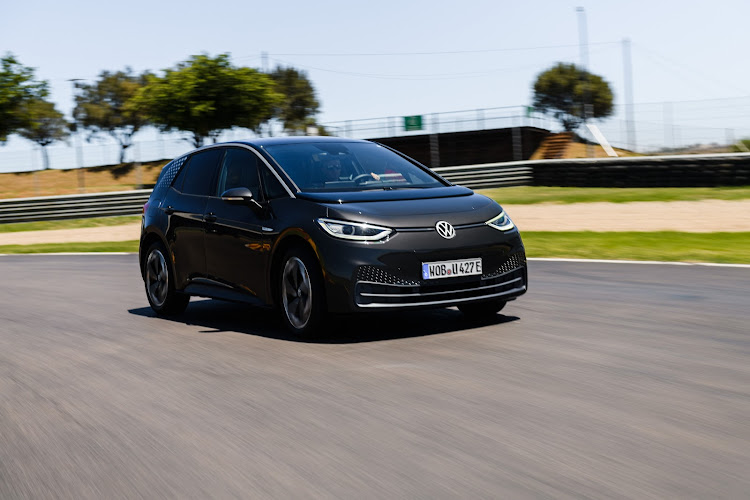 VWSA has a fleet of sexy electric ID.3 vehicles for SA customers to experience.
Image: Supplied

The electric car is coming but if the lacklustre sales of existing electric and hybrid options on sale are to be believed, SA is some way off adopting zero-emissions motoring.

With the now benchmarked 2030 deadline committed by more manufacturers for total electrification, one way or the other this stand-off between SA citizens and evolution will eventually come to a close.

In the meantime Volkswagen SA and other brands are soldiering on, readying themselves for inevitable change. Last week the local subsidiary brought out motoring media to sample the ID.3 — the compact all-electric hatchback it pins its hopes to continue on the messianic influence of the Beetle and Golf.

There are many who want a piece of the electric car pie but won’t commit because of the costs involved. Range anxiety is less of a bugbear these days with some electric cars able to travel more than 400km on a single charge.

With this in mind, VW SA is continuing on its phase 1 exposure programme which started in 2020 with a fleet of e-Golfs which were used for research purposes and testing by motoring media and Volkswagen dealers in an effort to gain insights into living with an electric vehicle in SA.

Phase two is kicking off with the ID.3 — the vehicle which Motor News first encountered at the 2019 Frankfurt Auto show where it was a showstopper that was mobbed even by German Chancellor Angela Merkel and her security entourage.

Our first drive experience of this key model happened exclusively on Zwartkops raceway. Though not the ideal way to discover real-world fascination with a street product, nonetheless I was able to deduce the driving refinement that comes with a silent car.

The ID.3 is a huge step up from the Golf 8, a noisy and vibrating dinosaur by comparison. The interior is evidently roomy thanks to less bulky components, like a conventional engine and a full size DSG transmission. Clever packaging sees the ID.3’s four wheels pushed further into the corners and this has resulted in the ID.3 wheelbase of 2,766mm versus the Golf at 2,631mm. 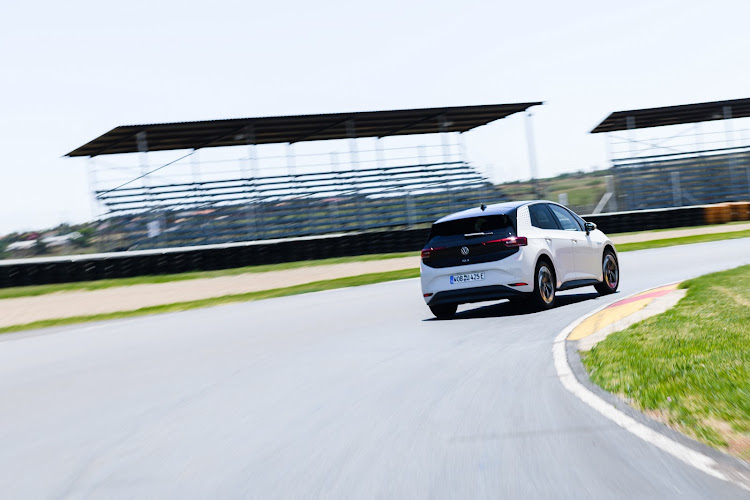 The ID.3 is not much of a track dynamo but has refinement for street driving in spades.
Image: Supplied

Comparisons can be extended to the interior furnishings. Though the Golf gets the latest digital wizardry, the ID.3 trumps it with its cutting-edge electric displays. But both prove they are related by equally bamboozling your knowledge of button placement and complicated menus.

The ID.3 drive is the peachy of the two for daily use but you don’t feel quite as connected to the steering wheel as you do in the Golf when threading it through corners.

Thrusting both the ID.3 Pro with 107kW and 275Nm of toque and the ID.3 Pro S with 160kW and 310Nm off the line is typically electric with instantaneous deployment of its torque when scooting out of the pit lane. But on the main track both ID.3 models certainly felt designed exclusively for road usage more so for than track exploits. There is a sportier ID.X model but it’s not in the current fleet.

The rack of batteries of its MEB platform that underpin the ID.3 make it markedly heavier than the Golf, and you feel it. This made it tricky to drive on the circuit but the brakes are strong and sharp and are designed to decisively retard the heft.

The strategy by VW SA to use its cars to introduce the electric future could or should work in its favour. The world, and indeed SA citizens, are fast running out options to continue reliance on conventional engines.

Over time there will be a catalogue of full electric VW ID. cars to choose from, including the current ID.4 SUV which is the reigning world car of the year title-holder and its recently launched ID.5 coupe SUV cousin and the ID.Buzz, which evokes the people-carrying spirit of the Volksie bus. The ID.2 is also confirmed and it is the electric counterpart of the VW Polo.

VWSA says it has no intentions to start full electric car sales in this market until at least after 2023. Next year it will kick off phase 3 with the new ID.4 SUV experiences.

The Toyota Corolla Cross launch was one of the biggest motoring events I have attended in the past seven years. With more than 60 journalists in ...
Motoring
6 months ago

BAIC is a Chinese brand that started its SA operations back in 2016 and by 2018 had started assembling a semi-knocked down range of cars at its ...
Motoring
6 months ago