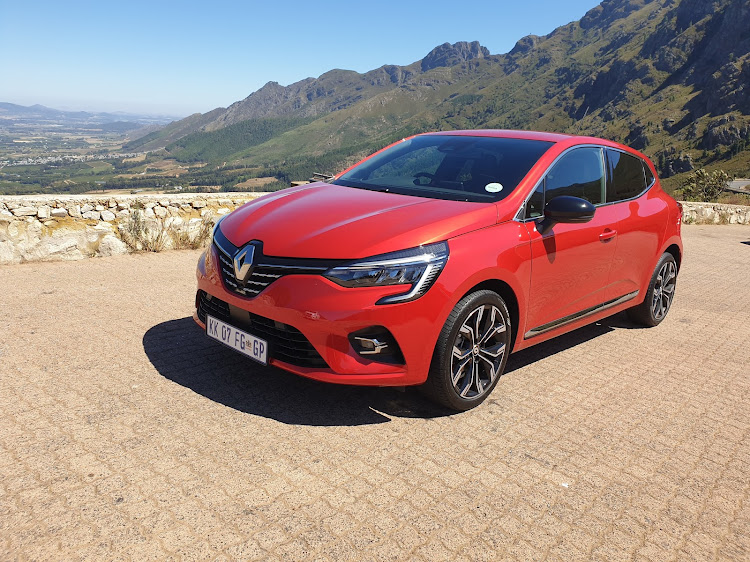 The Clio has become Renault’s best-performing model worldwide with 15-million units sold since 1990. The latest version has just been launched in SA. Picture: DENIS DROPPA

Nearly three years since its international launch, the fifth-generation Renault Clio has landed in SA to do battle against the likes of the Volkswagen Polo, Ford Fiesta and Hyundai i20.

It is the French brand’s top-selling car globally and it’s done well in SA too with more than 76,700 units sold since its local introduction in 2000, but the launch of the latest version was initially delayed as Renault SA wasn’t able to price it competitively due to a weakened rand, and further postponed by the global semiconductor shortage.

The imported B-segment hatchback arrives in SA in three models ranging from R309,900 to R349,900, prices that pitch them directly against the segment-leading Polo, the new generation of which was also unveiled locally last week.

Challenging the Polo’s hegemony is a tough nut to crack but the Clio should appeal to buyers with more individualistic leanings, and its sassy styling certainly stands out from the small hatchback flock. Compared to the old Clio it has broadened “shoulders” for a more assertive stance, and a striking frontal view with signature C-shaped LED daytime running lights for the range-topping model. Concealed rear door handles give it the look of a two-door.

Three grades are available — Life, Zen and Intens — and all versions are equipped with a 1.0l three-cylinder petrol turbo engine, powering the front wheels through a five-speed manual transmission.

With a five-star EuroNCAP crash rating, the new Clio comes with top-notch safety including ABS brakes, stability control and up to six airbags.

A new driver-orientated cockpit offers improved comfort and convenience, along with more space despite the car having shrunk 12mm to 4,050mm on the outside. The cabin’s compact but accommodates four adults without being unduly cramped, and the boot has grown to a segment-leading 391l.

The flagship Intens model has a range of smart technology not typically found in the small-car class including lane departure warning, auto high beam control, wireless smartphone charging and a digital instrument cluster — the other two Clio models have an analogue display. The top variant also has driver-selectable modes that change the steering and throttle responses, and changes the instrument panel display and interior ambient lighting to match the driving “personality”. 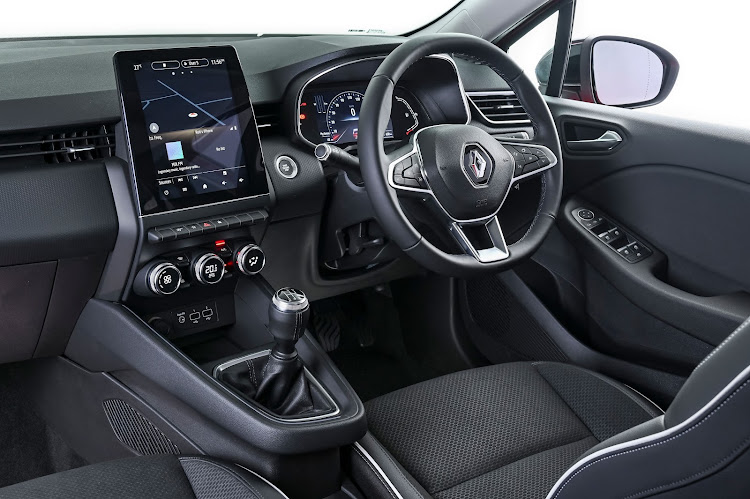 The cabin has a grown-up feel and the optional 9.3-inch multimedia screen is the biggest yet in a Renault. Picture: SUPPLIED

A seven-inch touchscreen infotainment system serves duty across the range, with the Zen and Intens models additionally equipped with navigation. Optionally, the range-topping Intens is available with a 9.3-inch high-resolution screen as part of a R15,000 Options Pack that also includes a  rear camera, front park distance control and 17-inch diamond cut alloy wheels.

The Clio is a likeable little car, proving to be a sound and solid runner on the Western Cape’s roads at the media launch.

The three-cylinder engine vibrates at idle but smooths out once on the go, and all-round refinement is decent with wind and road noise well suppressed.

The tiny engine feels more lively than its 74kW and 160Nm outputs suggest, with the factory claiming respectable performance figures of 0-100km/h in 11.8 seconds and a 187km/h top speed. The car scampers through suburbia and the open road without feeling gutless, and even has some useful overtaking poke.

Shifts are a little sticky in the manual transmission (no automatic is available) and with just five speeds the cruising revs tend to be high, which led to the test car averaging around 7.0l/100km on open roads. Renault claims 5.7l on the combined urban/freeway cycle.

Weighing just 983kg, it’s an agile little car that scurried with light-footedness through the Cape’s twisty mountain roads. For its diminutive size the ride quality is pretty impressive too, and it tackled bumps without the choppy nature of some small cars.

In the range-topping Intens model I drove, the cabin has a pleasantly plush vibe with soft-touch plastics and digital interfaces, and the cloth seats are comfortable. Small in stature it may be, but the fifth generation Clio feels like a grown-up car catering to budget-conscious buyers who don’t wish to skimp on refinement, technology or features.

Lacking an automatic model in the line-up may put the Clio at a disadvantage however, in a segment where most rivals offer two-pedalled convenience.

SA consumers need no introduction to the Volkswagen Polo nameplate. On a monthly basis the Polo and its more affordable Polo Vivo sibling continue to ...
Motoring
2 months ago

Adapt or die, is a saying wielded around more than ever in our fast-paced, ever-changing digital world
Motoring
3 months ago