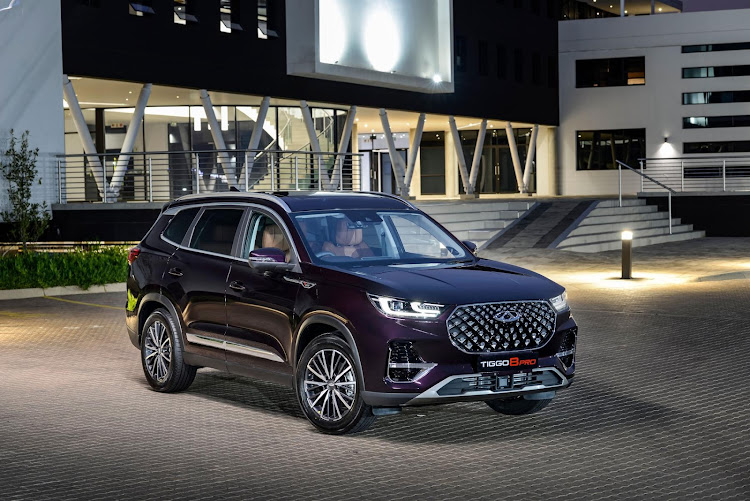 The new Chery Tiggo 8 Pro is attractive, in a generic kind of way.
Image: Supplied

My eyebrows were raised by certain events at the recent launch of the 2022 Chery Tiggo 8 Pro.

First was the frequency with which the manufacturer insisted on making everyone pose for group pictures. Imagine a congregation of media types and dealers sporting awkward smiles and making air-punching motions. The latter was something I opted not to do in case the action were to be perceived as a paid-for endorsement.

It seemed as if there were paid-for endorsements. At the evening banquet we watched clips presented by motoring personalities who, of course, only had good things to say about the newcomer.

More surprising was the chosen host for the evening: veteran radio man Sasha Martinengo. Him being a passionate lover of things Italian and wheeled, my first thought was that he got lost on the way to an Alfa Romeo meeting. 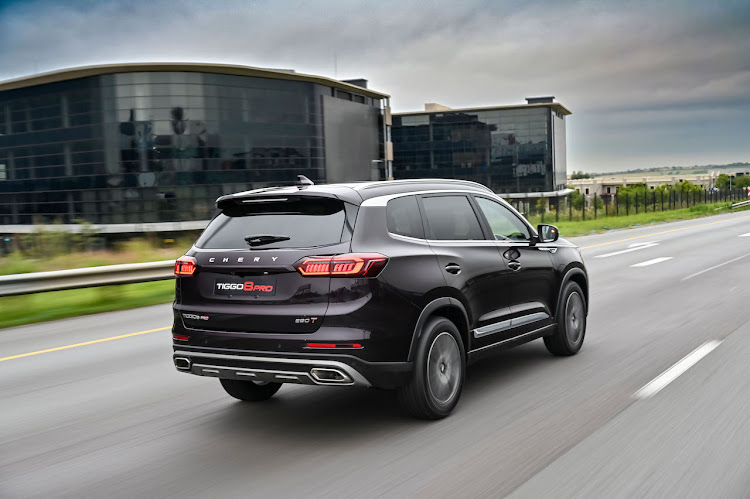 Inoffensive from all angles.
Image: Supplied

It struck me as a peculiar brand alignment and led me to ponder about the deeper aspects of the Chery brand and its identity — an identity it is still trying to forge. Truth is, Chery lacks the pedigree of well-established rivals from Japan, Germany and South Korea. Most South Africans associate the marque with the likes of the QQ3 from yesteryear. Or the original Tiggo, which was a Toyota RAV4 facsimile.

However, perhaps identity is not as important as one might think. After all, it took Haval less than five years to gain a genuine affinity among the car-buying public. Look at their sales performance. Like this fellow Chinese carmaker, Chery hopes the recipe of attractive products, generous specification and aggressive pricing will pay off.

The seven-seater Tiggo 8 Pro wants to take on the Haval H6, in addition to players like the Mazda CX-5, Volkswagen Tiguan, Hyundai Tucson and Kia Sportage. Those are serious contenders.

Pricing starts off at R496,900 for the Distinctive, while the Executive, which is loaded with bells and whistles, comes in at R546,900. A 10-year/1,000,000km engine warranty is part of the deal, benefitting only the original owner as it is not transferrable. A five-year/150,000km general warranty is standard, with roadside assistance of the same duration. At the launch, Chery announced the expansion of its national dealer footprint to 50 retailers. 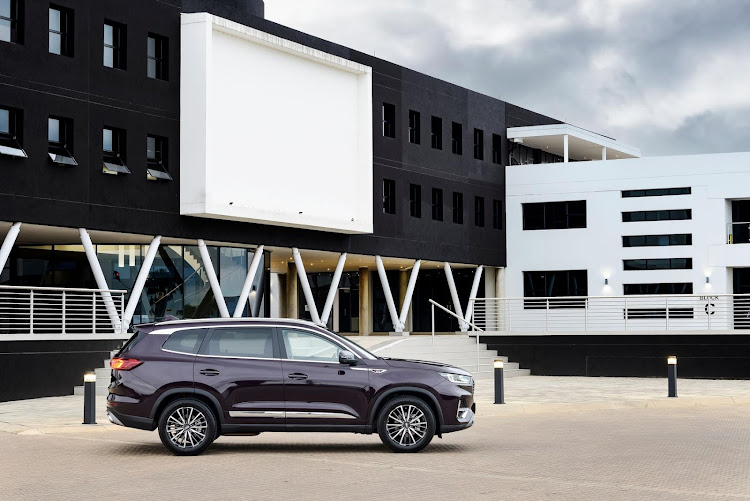 Visually, the vehicle evinces an upmarket look, but it is easy to suss out which models from other brands it drew influence from.

Same goes for the cabin. You will spot flavours from Audi, BMW, Mercedes-Benz, Volvo and Jaguar. These derivations are not a bad thing as the glitz factor (or the perception of it anyway) is high in the Tiggo 8 Pro. Our day was spent with the Executive version, which features sumptuous-looking tan leatherette upholstery with perforations. The front seats are comfortable and amply cushioned.

Top marks can be awarded for digitisation, with a fascia that boasts three screens. The first is an eight-inch display for the touch-operated climate control. Above this is the main 10.25-inch floating display, rating highly for clarity and ease-of-use. A 360º view mode is especially impressive, giving an exterior view of the vehicle from the perspective of a pedestrian. Ahead of the driver is a 12.3-inch cluster, showing speedometer, tachometer and other essentials.

Audio is courtesy of Sony. The Tiggo 8 Pro boasts the party-piece we first experienced in the high-end version of the smaller Tiggo 4 Pro: an in-car virtual assistant. Summon her aid by saying “Hey Chery” and give orders, which include opening and closing the sunroof and windows. 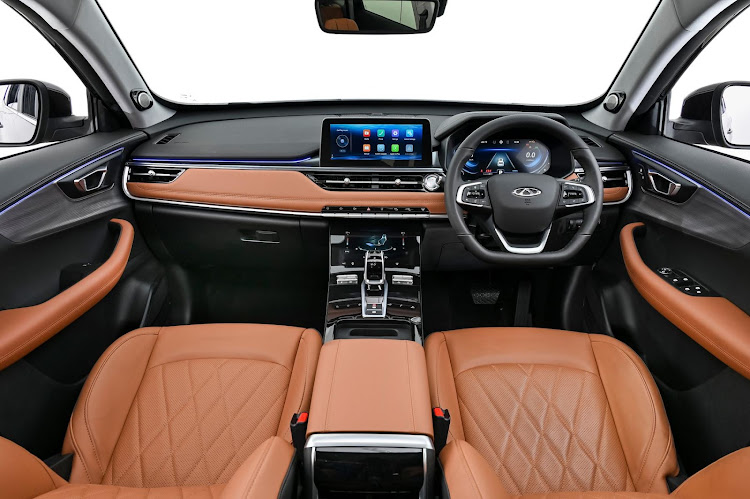 The interior has an ultra-luxurious veneer.
Image: Supplied

Six airbags are standard across the range, in addition to the expected safety basics like anti-lock brakes, traction control, electronic brake-force distribution and ISOFIX mounting points. It is a five-star vehicle, according to C-NCAP.

My only criticisms of the Tiggo 8 Pro pertain to the drive.

It has a rather strange central rear-view mirror with a field of vision that appears far too narrow and magnified. Some testers on the day commented that it caused headaches. 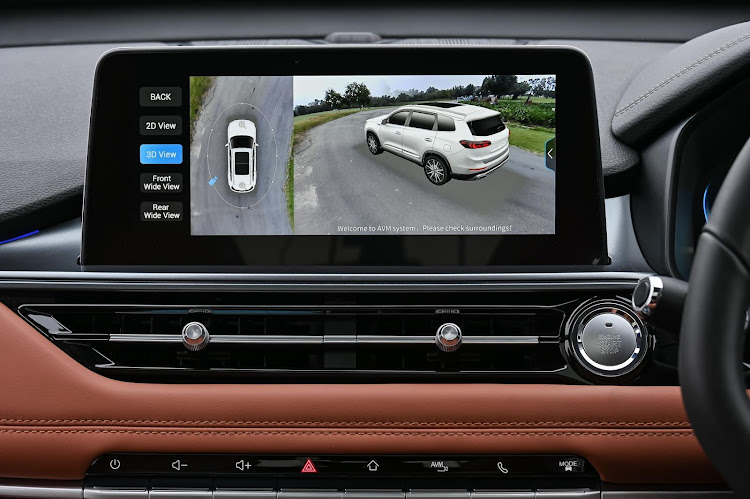 There are three high-resolutions screens in the cabin.
Image: Supplied

The suspension might also cause discomfort for some. There seems to be a constant vibration filtering into the cabin. Road imperfections and changing textures are not well suppressed by the shocks and springs of the Tiggo 8 Pro. The brakes take some getting used to, with all the feel located at the very bottom of the pedal. You really have to lean in.

Then there is the engine. It is a 1.6-litre, turbocharged-petrol unit with four cylinders. Output is fair, at 145kW and 290Nm. The problem is the coarse feel and noisy nature, attributes we grew familiar with during a jaunt down the N1, which required regular overtaking. Drive is to the front wheels via a seven-speed, dual-clutch which seemed to go about its job with reasonable sharpness.

It is by no means a perfect product, but it is easy to see how the Tiggo 8 Pro would appeal to shoppers in the C-segment sport-utility vehicle market. Particularly those who have no qualms looking beyond the traditional brands.

Nearly three years since its international launch, the fifth-generation Renault Clio has landed in SA to do battle against the likes of the ...
Motoring
2 months ago

SA consumers need no introduction to the Volkswagen Polo nameplate. On a monthly basis the Polo and its more affordable Polo Vivo sibling continue to ...
Motoring
2 months ago