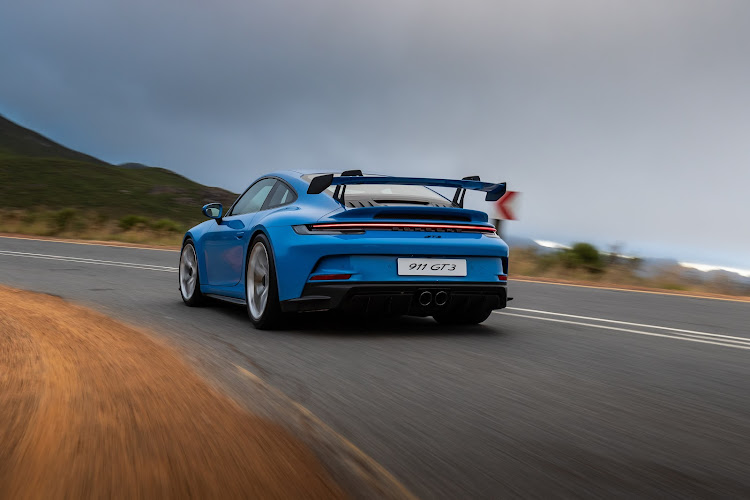 The GT3 is an angrier, more visceral Porsche that amplifies every driving sensation. Picture: SUPPLIED

The firm suspension exaggerates every road imperfection and jounces your body like a rag doll, leaving you feeling a little worn out after a drive.

And that’s just from the passenger seat.

When you’re at the controls, it feels like you’re riding a dragon attacking King’s Landing.

Where a regular 911 Carrera is fast, but benign and comfortable enough to be used as a daily driver, the GT3 is essentially a street-legal racing car.

It is a thing of sound and fury. It’s an angrier, more visceral Porsche that amplifies every driving sensation, and its highlight is one of the world’s best-sounding engines: a 4.0l flat-six that revs to a howling 9,000rpm.

Ye gods, what a sound! It’s a wail that threatens to blow a hole in the fabric of the universe, and you keep the engine revving much higher than it needs to, just to hear that goosebump-inducing roar.

The car’s aural exuberance is heightened by the noisy whoosh of wide tyres, and the occasional clunk of the roll cage as you drive over bumpy roads. Whispered conversation is not on the cards inside this loud and livid Porsche.

On the standard suspension setting the car is firmer than the old GT3, and the characteristic granite-solid feel remains.

There are few concessions to comfort. The jarringly hard ride makes the car dart and jive unnervingly on bumpy tar, with the very direct steering bucking in your grip. It requires a firm grasp and above-average driving skills.

The GT3 prefers a smoother surface, preferably with painted apexes, and a chequered flag at the end. I had no racetrack at my disposal, but on the Cape’s smoother mountain passes the car came to life with a precision that revealed its track-bred nature.

The semi-slick Michelins cling vociferously, and it takes a solid effort to entice any squeal from them while chasing through serpentine roads like Franschhoek Pass. In a cooldown after a spirited cornering session, the sticky tyres ping pebbles onto the underbody. Even at lower speeds, driving this car is an “event”.

The GT3 has never been the fastest machine in the 911 range, just the most purist and driver-focused. The new 992 generation car takes another leap forward by lapping the Nurburgring in 6:59.9 — a full 17 seconds quicker than its predecessor. 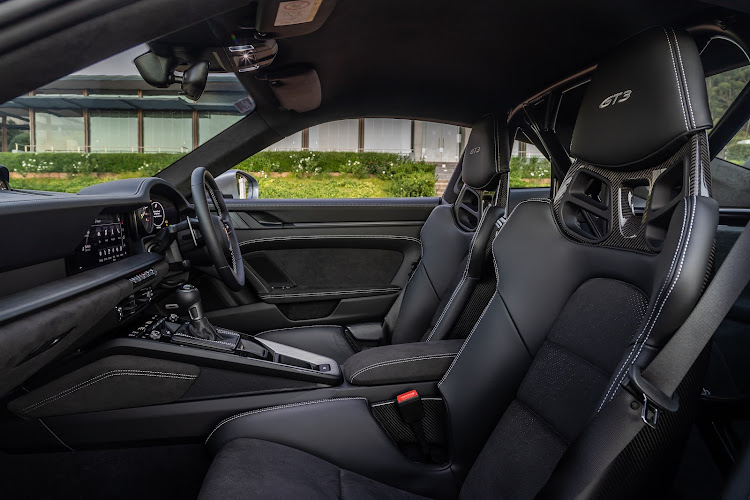 There are no rear seats, and their place can be taken by the roll cage that comes as part of the optional Clubsport package. Picture: SUPPLIED

I drove both versions and the PDK was its usual finessed self, switching ratios with such swiftness and dexterity it was almost as if the car had a sixth sense that predicted my throttle inputs. It is the choice for drivers who want ultimate point-and-squirt convenience.

The six-speed manual is for those who want to go the whole hog while they’re doing the purist thing anyway. It is a slick six-hooker that, despite having its slots close together, seldom results in missed shifts, and it auto blips on downshifts to further underline the racing genes.

The clutch isn’t particularly firm and won’t cause undue physical stress commuting in heavy traffic. But the manual GT3 does requires more from the driver, especially when you have to take a hand off the lively steering during shifts on a bumpy road.

The three-pedalled GT3 is a rarefied machine that enjoys revered status in purist sports car circles. You feel as if its owners should have a secret handshake or something.

At 1,418kg for the manual and 1,435kg for the PDK, the new GT3 is barely any heavier than its predecessor despite being a larger car, and mass-saving was achieved by using lightweight carbon fibre reinforced plastic in the bonnet, rear decklid and rear wing, lightweight glass for the windows, forged light alloy wheels and a lightweight sports exhaust. 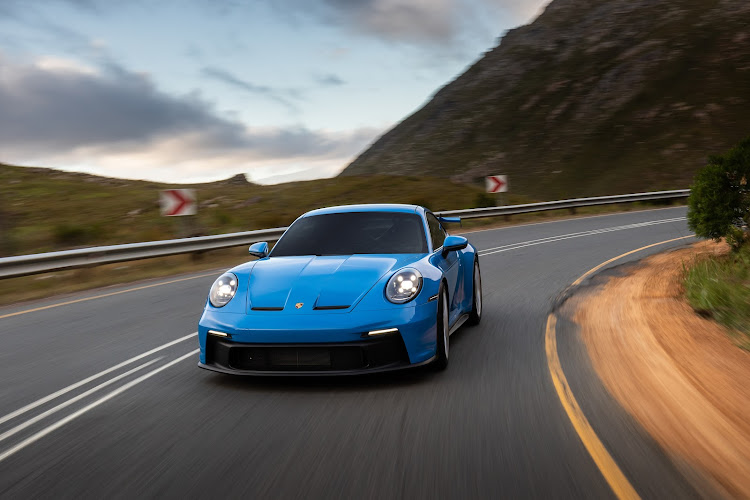 The GT3 rides 20mm lower than a 911 Carrera, and has adjustable sports suspension with rear-axle steering. Picture: SUPPLIED

Additional weight can be lopped off with an optional carbon fibre roof and carbon-ceramic brakes, the latter fitted to my test vehicles. With these race-bred brakes, the car repeatedly blasted to a stop without fading.

The new car retains the GT3’s well-known design tropes, including wheels with central locking hubs and a prominent rear wing. The wing is adjustable and so is the front air splitter, allowing the car to be set up for either road or track use. In its most performance-oriented setup the car has about 150% more downforce than the outgoing GT3, and about 50% more in the street setting.

There are many supercars more muscular, but the GT3 Porsche forsakes ultimate bench-pressing ability in favour of litheness and agility. More crossfit athlete than body builder, if you will.

It is also slightly unhinged, like a mad scientist cackling over bubbling test tubes. Or was that just the driver?

* The seventh edition Porsche GT3 has arrived in SA in automatic and manual versions, and also a Touring derivative minus the rear wing, all priced at R3,109,000 including a three-year/100,000km Driveplan.

There’s something for everyone in the Porsche 911 lineup. At the less extreme side of the spectrum you’ve got the lovely Carrera and Carrera S models ...
Motoring
7 months ago