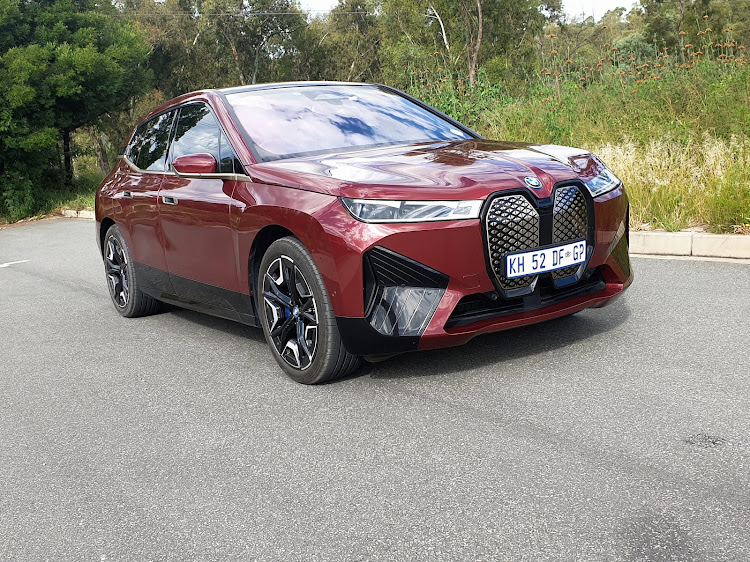 The cynical view is that with the high prices of electric vehicles (EVs), compounded by long charging times and Eskom’s woes, battery-powered cars seem doomed to fail in SA.

This hasn’t stopped car companies speeding towards electrification, and the latest battery-powered car to land in SA is the BMW iX. The large SUV is BMW’s flagship EV and in terms of performance, prestige and range it’s a very different animal to the smaller i3 which has been on sale here for several years.

The iX is available in two variants, both powered by an electric motor at the front axle and another at the rear to provide all-wheel drive. The entry-level xDrive40 model has outputs of 240kW and 630Nm, while the range-topping xDrive50 we drove gets the full-fat 385kW and 765Nm.

Performance figures are quoted at 0-100km/h in 6.1 seconds for the baseline version and a brisk 4.6 seconds for the xDrive50, with top speed in both cars pegged at 200km/h.

As impressive as the figures sound on paper, they fall short of the actual intensity of the iX’s acceleration. Due to the instantaneous nature of electric power delivery, whether pulling off from standstill or overtaking there is no waiting for revs to spool up or gears to shuffle. It’s just a surge of seamless, trigger-response thrust. Flooring the throttle slings the big xDrive50 forward like a fast delivery from Dale Steyn, unleashing g-forces that squeeze you into your seat.

So much instant poke at your command can become a little addictive and quickly drains the battery, but with your inner boy racer on mute this electric Beemer has a claimed driving range of up to 630km.

We didn’t quite achieve that target as we explored the performance potential every so often, but in our week with this electric car we never experienced range anxiety. After several days of commuting and a longer weekend drive, there was still 170km left in the battery and it truly has an impressive range.

The disadvantage is you don’t have the ability to fuel up quickly on longer trips. BMW claims the xDrive50 can be charged from 10%-80% (70%) in about 55 minutes on a DC fast charger. Our experience at a BMW dealership took longer, with the car charging from 38% to 81% (43%) in an hour. 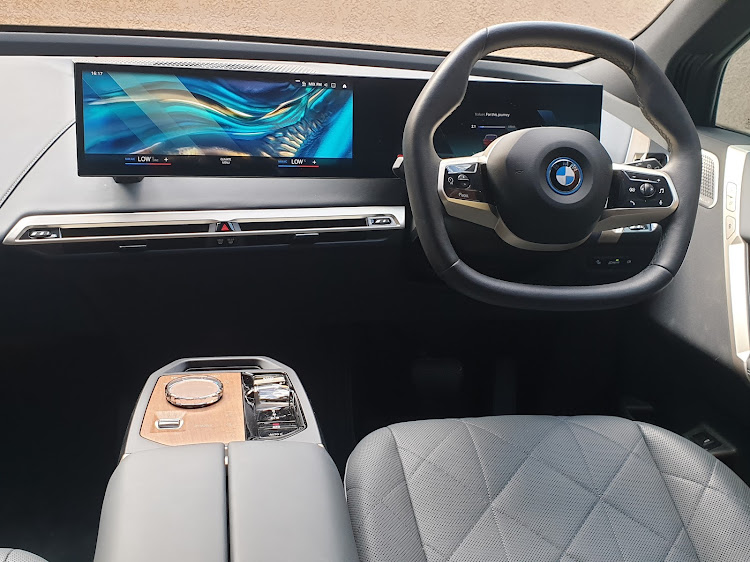 The big selling point — and not an insignificant one with petrol prices what they are — is that charging at BMW dealers and at BMW-branded public chargers is free.

The car can also be charged at home at a regular wall socket or at a Wallbox which BMW supplies and installs at no additional cost. The latter is able to juice up the car to 80% in a claimed three hours.

Apart from the electric drivetrain, the iX strays from BMW styling convention particularly in its interior décor. For starters, the electric seat adjusters are mounted on the doors, Mercedes-style. Second, they are made of crystal, as are the iDrove knob and volume adjuster.

It’s an eclectic cabin environment, with the crystal supplemented by open pore wood, giant digital screens and leather. The lounge-like atmosphere is a clean setting with minimal physical buttons to clutter things up, and an open and airy feel is created by a lack of a centre console.

The jury’s out on the stylistic appeal of the large diamond-pattern seat design, but they are among the most comfortable car seats I’ve sat on.

There is oodles of legroom, much more than you’d get in an X5, and rear seating room is plentiful even when the front passenger stretches their legs straight.

A novel feature is the photochromatic panoramic roof that can be darkened or lightened at the press of a button.

Externally this X5-sized SUV bears the supersize kidney grilles of modern BMW convention, flanked by the slimmest headlights you’ll find on any BMW. The iX is also characterised by flush-fitted door openers and frameless side windows.

To save weight and increase rigidity it’s constructed of an aluminium space frame, with most of the body made of lightweight carbon fibre-reinforced plastic (CFRP). When the doors are opened, unpainted CFRP is revealed as a styling element on the inner sills. 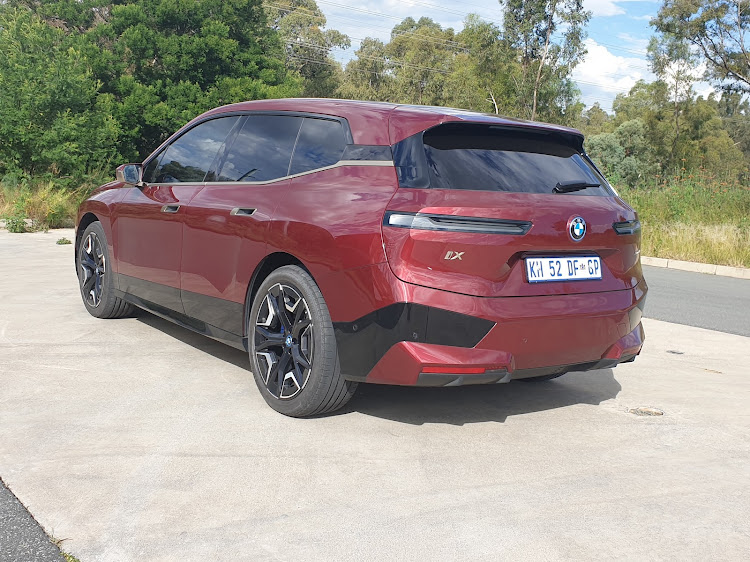 The iX xDrive50 has a claimed driving range of up to 630km. Picture: DENIS DROPPA

At a portly 2.5 tonnes the iX is too heavy to be flung through corners like one of BMW’s sports models, but the battery located in the underbody lowers the centre of gravity to give this big Beemer respectably well-mannered handling.

There are different driving modes that affect the driving dynamics, supported by interior ambient lighting: from soothing aqua for Economy to aggressive red for Sport. Sport mode livens up the driving experience through sharpened steering and a simulated engine sound to replace the sterile silence; whatever your view of synthesised sound it does provide some aural charisma to proceedings.

The iX has a cushy ride on its adaptive air suspension, but the optional low-profile 22-inch tyres need to ideally be kept away from potholes and gravel roads. Those wishing to test the all-wheel drive system and generous 203mm ground clearance off-road should choose the standard, more bump-friendly 20-inch rubber.

For well-heeled early adopters of EV cars, the iX is a luxury SUV at the cutting edge of comfort and technology, a fast and silent business-class lounge on wheels. It is a hard sell when you can buy a petrol-powered X5 M50i with similar performance for 300k less, but if you stick to charging the iX at BMW charging stations your travel costs are free.

BMW iX vs the competition