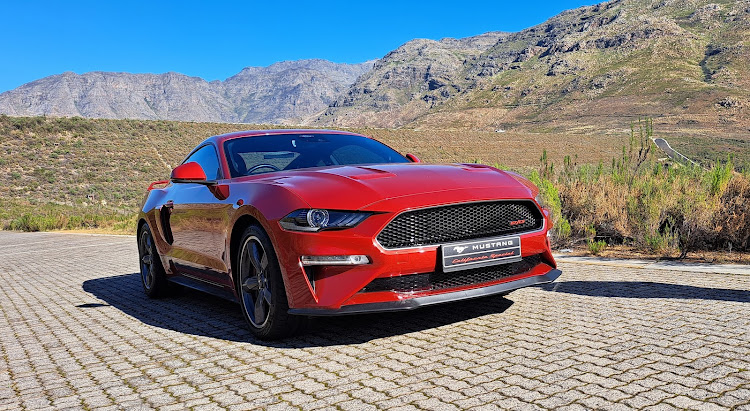 The last Mustang I drove was the 2.3l turbocharged version a couple of years ago, and as feisty as it was, it also sounded clinical. A four-cylinder engine in Ford’s pony car just ain’t right.

Mustang customers agreed, leading Ford to ditch the 2.3 model last year due to its lacklustre sales. Now you can have your ‘Stang in any choice you like as long as it’s the 5.0l V8, like the driving gods intended. And rear wheel drive, of course.

This roaring, high-revving engine perfectly matches the Mustang’s gritty personality and it’s one of the few remaining naturally aspirated V8s on the market. This all-American sports car is about visceral sensation and the V8 provides plenty of it with its angry pit bull growl.

There’s nothing like the roar of a high-revving, eight-cylinder engine to put you in a derring-do driving mood, and so it was when the Western Cape’s Franschhoek Pass, blissfully bereft of traffic for once, lay open before me in a ribbon of winding tar, inviting me to explore its curves.

The Mustang’s relatively bulky and not particularly light, but it’s a forgiving thing that stays composed when driven hard. It might not be a car to blaze world-beating laptimes on a smooth racetrack, but this American coupé impresses with its confidence-inspiring grip and comfortable ride on real-world roads with bumps.

It stays planted without resorting to rock-hard suspension or overly sharp steering that might cause twitchiness. It’s a grand tourer that stays comfortable while slaying distance.

Traction and cornering grip are maximised by a limited-slip differential and MagneRide Damping System, the latter using an electronically-controlled fluid to match damping resistance to the driving scenario.

These days around 400kW is considered the entry point into the true sports car club, but the Mustang certainly doesn’t feel pedestrian with its 330kW and 529kW, outputs that are good for a 4.5 second 0-100km/h sprint.

It’s a pleasantly strong, free-revving and linear power delivery, and it has what I like to think of as a Goldilocks power zone — in that it’s fast enough to be fun without having to carefully massage the throttle lest you unleash more power than you can handle through the curves. In the Mustang you often get to experience the visceral joy of being able to bury the throttle.

The 10-speed automatic transmission is a slick-shifting pleasure that offers Normal, Sport, Track, Drag and Snow/Wet driving modes. Good Neighbour mode limits the exhaust’s noise output to avoid waking the neighbourhood. The noise didn’t bother those who cared to comment though; on the contrary I was regularly exhorted to rev it wherever I came to a halt, and the car left many smiles in its wake. It’s amazing how many people are passionate about Mustangs.

The car I drove was the new California Special, a limited-edition model souped up with a cosmetic package that has the “quintessential style of west coast America”, according to Ford.

Limited to just 100 units locally, the car follows the Bullitt and Mach 1 specials that were introduced in recent years and is exclusively available as a fastback coupé.

It is inspired by the 1968 Mustang California Special with its black honeycomb grille featuring a red GT/CS badge, and side stripes finished in black, red and grey. Incorporating GT/CS logos, the stripes feature a hidden “California Special” script that is almost invisible in low light conditions but becomes prominent in stronger sunlight.

Aerodynamic tweaks include a larger front splitter, a rear wing from the GT Performance Package, and cosmetic side air scoops behind the doors. At the rear, a California Special faux filler cap sits above quad 4.5-inch tailpipes linked to the Active Valve performance exhaust. The package is rounded off by unique 19-inch alloy wheels finished in Carbonised Grey to complement the front splitter, side skirts and rear diffuser.

Inside, the car has standard heated and cooled front seats, leather seats and door inserts are part-finished in grey Miko suede, a synthetic material made from recycled polyester, with red stitching. Seats and floor mats are embossed with the GT/CS logo, and the instrument panel is finished in Carbon Hex aluminium. 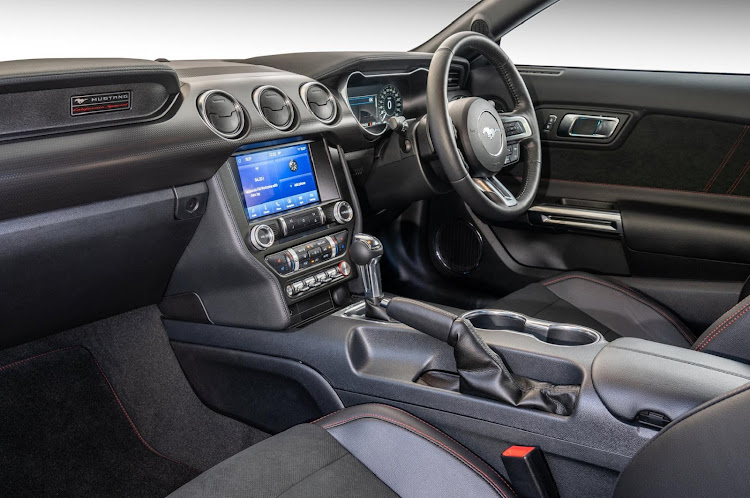 The leather seats and door inserts are part-finished in a suede made from recycled polyester. Picture: SUPPLIED

The Mustang is SA’s most popular sports coupé and has sold over 3,600 units since its 2015 launch.

The Mustang California Special is priced at R1,154,900 including a four-year/120,000km warranty. Customers have the option of purchasing service or maintenance plans up to eight years or 150,000km.

It was 18 years ago at the Gerotek Test Facility that Mahindra SA was formally established in this country and introduced its Scorpio SUV.
Motoring
1 month ago

The past few years have been kind to those with a penchant (and pocket) for high-end, double-cab pick-ups.
Motoring
1 month ago