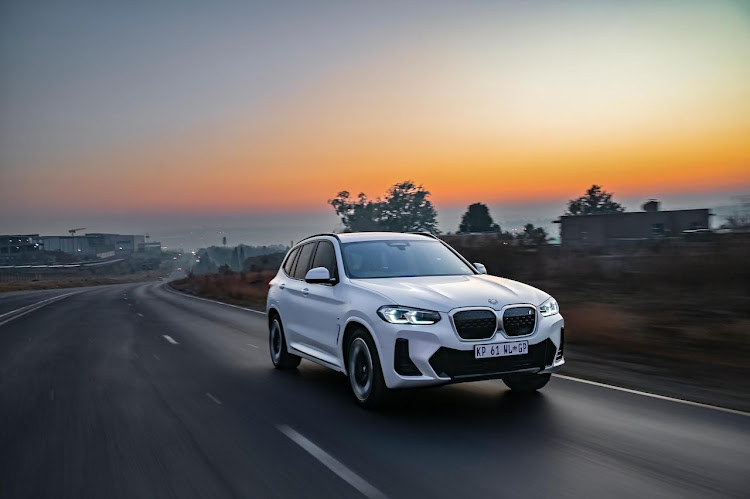 Attending the local introduction of the BMW iX3 last week felt like a full-circle moment. It seemed like just the other day the brand was talking to us about electrified future plans at a special preview in 2013.

Back then, the BMW-i division had yet to be launched. Instead, the tangible fruits of its electric endeavours at the time were two rather interesting trial products: the Mini E, based on a traditional Cooper three-door, and Active E, based on the 1-Series coupé.

Both were fascinating (yet compromised) examples of what the future would hold. That Mini, for example, had its rear section occupied with a battery block, meaning no space for occupants or luggage. 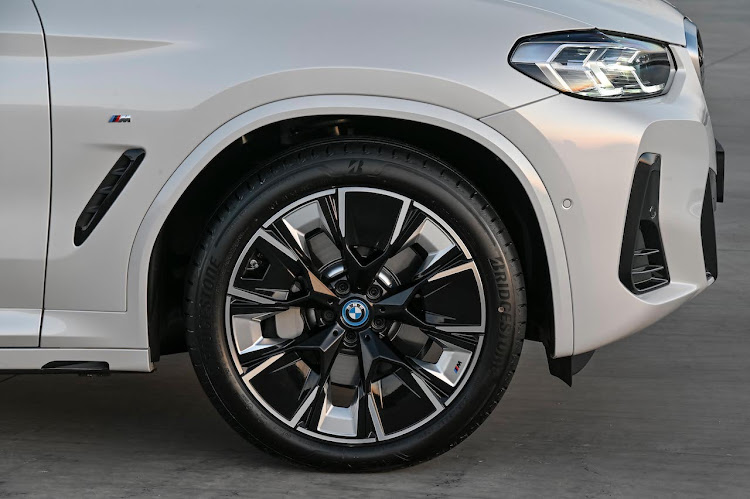 At the event nearly a decade ago there were representatives from Eskom in attendance as well as people from Nissan, a brand which, in case you forgot, pioneered the mainstream electric car genre with its Leaf.

As it stands, we know Eskom has yet to get its act together. Meanwhile, Nissan seems to have ditched its electric ambitions in the country. Load-shedding or not, BMW does not seem to plan on slowing its roll in the battery-powered vehicle ambit.

The latest to join the line-up is the iX3. And just as the title implies, the model is much like the standard X3 you know, but without an internal combustion engine. 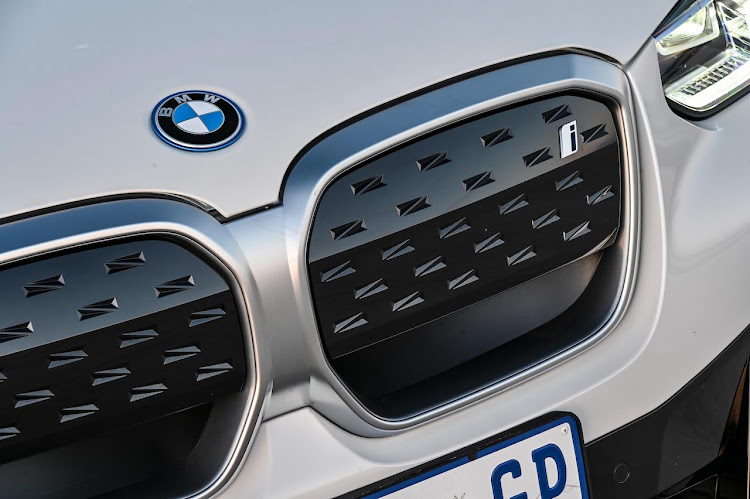 To the uninitiated, the iX3 looks like its non-electrified counterpart at first glance. Look at it closely and you will appreciate an assortment of model-specific elements offering distinction. Best off all, one is thankful it does not sport a ridiculous grille akin to its larger iX sister.

Interestingly, the iX3 is fitted with items from the M Sport catalogue. Aerodynamic wheels (20-inch) boast a more intricate styling pattern than those offered on stablemates. Note the lack of slats in the kidneys up front (no need, since there is no engine to cool); while the rear wears a particularly chunky-looking faux diffuser.

If you are partial to familiarity, the cabin of the iX3 is unlikely to shock. Here you will not find a radical lounge seating concept or over-the-top embellishments that try too hard to reflect green credentials. 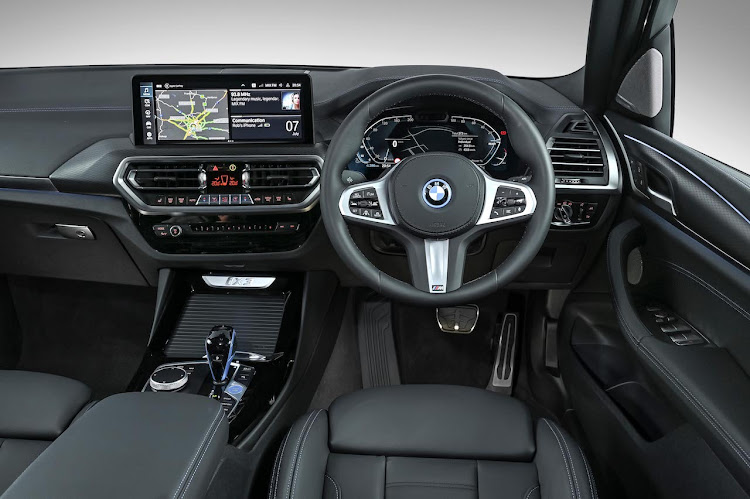 Like a standard X3, the seating position is snug, confidence inspiring, while a thick-rimmed, three-spoke M Sport steering wheel delivers an assuringly meaty grip. Vernasca leather upholstery, aluminium inlays and decorative blue accents are among the interior highlights. As with the rest of the BMW range, buyers receive fully digitised instrumentation, in addition to the iDrive system with its comprehensive suite of capabilities. This includes Android Auto, Apple Car Play as well as additional services from BMW Connect.

Hitting the start button reveals the signature BMW-i acoustic greeting. In complete silence we nosed the BMW out of our Midrand starting point and onto the highway. Within the first 5km it was striking how “normal” the experience felt: in a positive way.     Perhaps we are now fully sensitised to electric vehicle operation. And perhaps BMW also set out to make the iX3 as conventional a product as possible in the hopes of facilitating a natural, seamless transition for prospective customers who may own a diesel or petrol X3.

The vehicle employs an 80kWh battery, with a fast-charging rate up to 150kW, where 10 minutes could yield 100km of range. Its electric motor, transmission and power electronics are housed in the rear-axle subframe. The iX3 is rear-wheel drive with a power output of 210kW and 400Nm. Top speed is pegged at 180km/h. 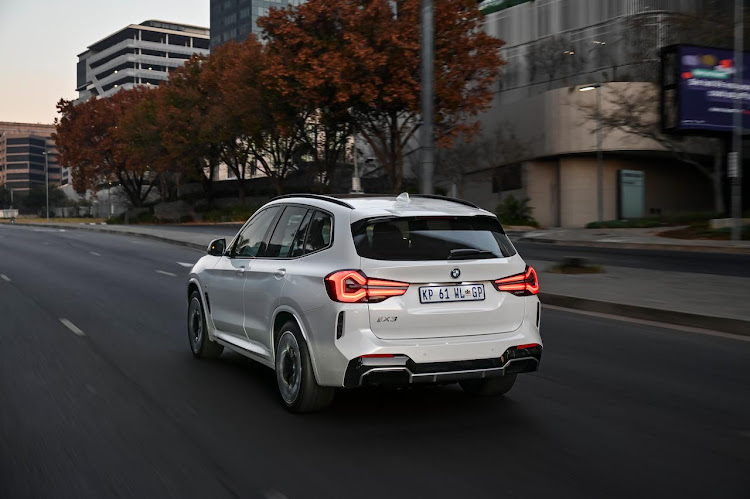 The claimed 0-100km/h time of 6.8 seconds certainly translated into a commensurate feeling of briskness in the real world. There is no dispute as to the responsiveness and immediacy of the iX3 when it comes to overtaking, claiming gaps or simply keeping steady momentum on the freeway. Long distance range is claimed to be 460km. Still not enough to get you to Durban in one go, but certainly more than sufficient for average daily commuting.

While the boot 40l smaller than that of a standard X3, the quoted 530l of the iX3 is still nothing to be sneezed at. It costs R1,290,000 which includes a BMW Wallbox charger as well as free charging at BMW Group-branded public charging facilities. Within the X3 range, R1,242,500 gets you into an xDrive 30d (M Sport); serving six-cylinder diesel punch with a substantial range and, of course, a dramatically shorter fill-up time.

Comparing apples with apples, on the electric front, it is priced similarly to the smaller Volvo XC40 Recharge (R1,260,000); which makes it rather competitive. The iX3 becomes even more compelling when you consider that the Audi E-Tron 55 SUV has a base price of R1,990,000.

Volvo confirmed on Wednesday pricing for its XC40 P6 Recharge. The most affordable all-electric offering in the Swedish carmaker's local model range, ...
Motoring
4 weeks ago

The second-generation Hyundai Creta – launched locally in 2020 – has been invigorated with eye-catching new exterior styling.
Motoring
1 month ago

Toyota’s large and luxurious Crown is coming to SA