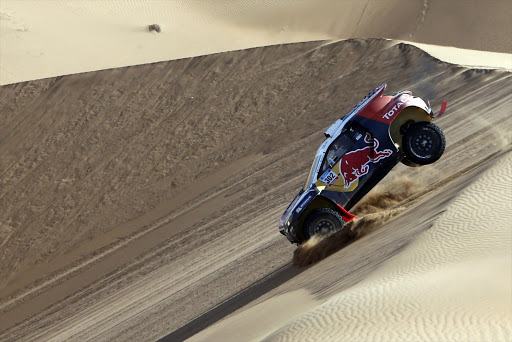 Qatari driver Al-Attiyah, the 2011 champion, finished 2min 40sec ahead of Mini team-mate Nani Roma, the defending champion, whose hopes had disappeared on a disastrous opening stage on Sunday when he lost eight hours.

In third place on Wednesday’s fourth stage was South Africa’s 2009 champion Giniel De Villiers behind the wheel of a Toyota. De Villiers was 2:57 behind Al-Attiyah as he claimed a fourth successive stage podium finish and is now second in the overall title chase, more than eight minutes behind his Qatari rival.

Saudi Arabia’s Yazeed Alrajhi, also in a Toyota, was fourth on the 315km timed stage Wednesday to sit third overall, 23:33 behind Al-Attiyah. “The man to beat is Giniel,” said Al-Attiyah after giving Mini, who swept the podium in 2014, their fourth stage win out of four so far. “He is always a threat on the Dakar, always amongst the top places. We had a three-minute advantage on him. I need to keep going like this, be careful but also attack from time to time.”

Peugeot, returning to the race after a 25-year absence, endured another disappointing day with 11-time champion Stephane Peterhansel finishing fifth having looked on course for victory until the closing kilometres. He is 10th overall but Carlos Sainz, the 2010 champion, suffered a series of technical setbacks at the 30km mark and was still to finish after needing assistance from support vehicles.

Spanish motorcyclist Joan Barreda rode to his second stage win of this year’s race, taking his Honda to victory ahead of defending champion Marc Coma on a KTM with Chile’s Pablo Quintanilla, also on a KTM, in third. In the overall standings, Barreda now leads by 12min 49sec from Coma with Honda teammate Paulo Goncalves of Portugal back in third place, 20min 29sec off the lead.

“The first part of the stage was a very fast but complicated track. Marc Coma was ahead and it was very difficult to catch up with him. I stayed focused and motivated. I caught up with him towards km 100 and eased into a solid pace,” said Barreda. “We tackled dunes and navigation was difficult. We’re in control. The next few days will be extremely tough. Actually, there’s a big chunk of Dakar left and we know there are tricky situations ahead.” Honda’s Laia Sanz was eighth on Wednesday to be the best-placed female rider and moved into 12th overall.

The motorcycle stage was held as race organisers hunted for clues to the cause of the death of Michal Hernik. The 39-year-old Polish rider’s body was found 300 metres (yards) from the desert track with no apparent injury on Tuesday and no damage to his motorbike that would indicate an accident, according to race director Etienne Lavigne.

Lavigne added that there was no helmet on Hernik when the body was found. Organisers sent a helicopter to look for Henrik after he failed to arrive at the finish line of Tuesday’s stage between the Argentinian towns of Villa Carlos Paz and Chilecito. His satellite tracker had stopped sending signals.

His was the fifth death since the rally was moved to South America in 2009 over security concerns in the Sahara region and the 24th since the race was created in 1979.

Dakar Rally results on Wednesday after the fourth stage from Chilecito in Argentina to Copiapo in Chile: