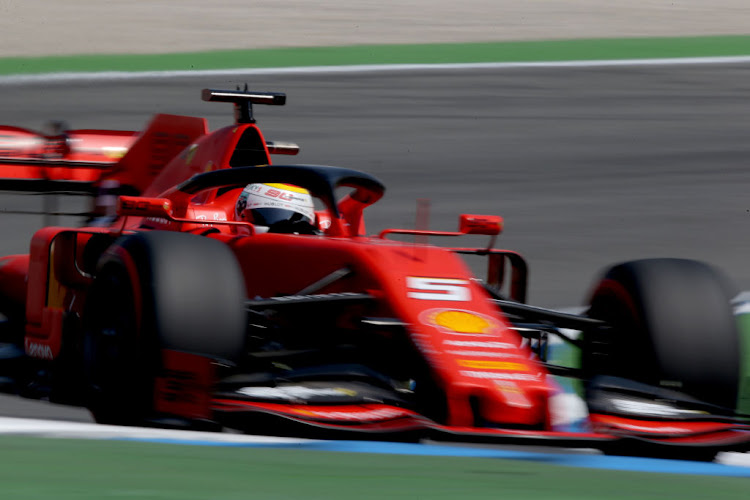 Sebastian Vettel of Germany driving the (5) Scuderia Ferrari SF90 on track during practice for the F1 Grand Prix of Germany at Hockenheimring on July 26, 2019 in Hockenheim, Germany.
Image: Charles Coates/Getty Images

Sebastian Vettel was fastest for Ferrari in opening practice for his home German Grand Prix on Friday, with teammate Charles Leclerc completing a one-two at the top of the timesheets.

The four-time world champion lapped the 4.5km Hockenheim track, located just a half hour’s drive from his boyhood home in Heppenheim, in one minute 14.013 seconds on a sweltering morning.

The German, who crashed out while leading last year's race and is in danger of being upstaged by the younger Leclerc, was 0.255 faster than the Monegasque.

Championship leader Lewis Hamilton, his Mercedes painted in a special livery to celebrate 125 years of motorsport involvement for the German marque, was third and 0.302 seconds off Vettel’s pace.

The Briton, who leads team-mate Valtteri Bottas by 39 points and has won seven of 10 races so far, has expressed concern that the European heatwave could sap his bid for victory on Sunday.

Hamilton’s gap to Vettel appeared, however, to be down more to the 34-year-old setting his fastest lap on the medium tyres compared to the grippy and faster softs used by the German.

Bottas ended the session fifth, sandwiched between the Red Bulls of Max Verstappen in fourth and Pierre Gasly in sixth.

The Finn went off at the same corner Vettel crashed at last year but extricated himself from the gravel without damaging the car.

Carlos Sainz was seventh for McLaren, with Romain Grosjean eighth despite Haas running his car in the same specification it used for the season-opening Australian Grand Prix.

Lance Stroll was ninth for Racing Point and Daniel Ricciardo, who survived a minor spin, rounded out the top 10 for Renault.

The session was briefly red-flagged shortly after it got under way with Kevin Magnussen grinding to a halt on track, complaining of a loss of power.

His Haas was towed back to the pits with track action getting under way shortly after.

There were no major incidents other than drivers, including Hamilton and Bottas, running wide as they got to grips with the track.

Vettel says he is his own biggest critic

If Ferrari's Sebastian Vettel is feeling the pressure ahead of his home German Grand Prix at Hockenheim, then he knows who to blame
Motoring
2 years ago

Hamilton hoping for rain to beat the Hockenheim heatwave

Formula One leader Lewis Hamilton is hoping rain will come to the rescue as a Hockenheim heatwave threatens to dash Mercedes's hopes of a home German ...
Motoring
2 years ago

Bentley, Ferrari and Porsche will form part of a high-powered GT grid in November blockbuster
Motoring
2 years ago