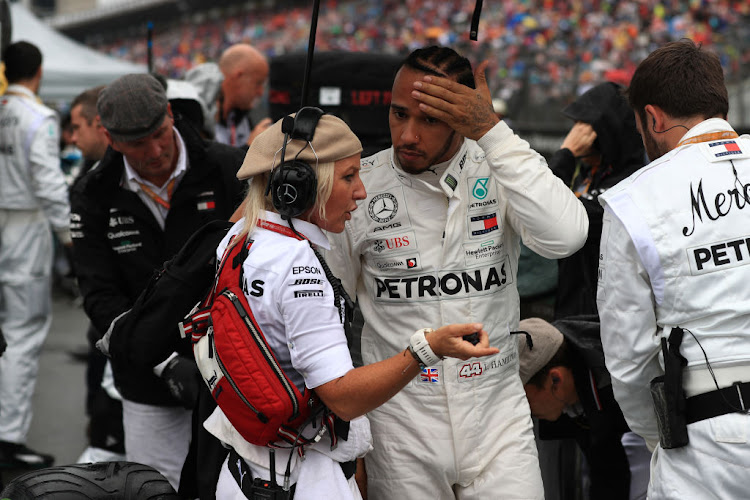 Mercedes-Benz driver Lewis Hamilton speaks to his personal trainer at Hockenheimring in Hockenheim, Germany, on Sunday. The champion driver made mistakes in the race at the weekend, saying he had never felt so sick.
Image: Octane/Action Plus via Getty Images

Formula One leader Lewis Hamilton is planning to get plenty of rest over the next few days as he seeks to shake off the sickness that laid him low in Sunday's German Grand Prix.

The Mercedes driver, who has little time to recover before the next race in Hungary this weekend, left no doubt that Hockenheim had been an ordeal.

"I never felt this sick. This has been the hardest race weekend of my life," the Briton said in a social media post after a chaotic grand prix.

"I've cancelled everything I have for the next few days. I’m going home, probably just to sleep the next few days and try to get over this bug," the jet-setting champion told reporters on Sunday evening.

Hamilton had complained of a sore throat on Saturday, revealing after taking pole position that Mercedes had put French reserve Esteban Ocon on standby in case the five-times champion felt too unwell to drive.

While he led the early stages of a mentally taxing rain-hit race, his afternoon unravelled with a smashed front wing, a penalty for a pit-lane offence and a wild spin.

He finished in 11th place, his worst placing since the 2013 Spanish Grand Prix, until penalties for Alfa Romeo's Kimi Raikkonen and Antonio Giovinazzi moved him up two places.

"It was probably the worst day I've had in the office for a long, long time," he said about a race won by Red Bull's Max Verstappen, who will also be a strong contender for victory in Hungary.

"Things are going to be thrown at you on days like this, but it felt like one domino after another, like snakes and ladders, and I kept hitting the snakes today."

Hamilton said his condition was "not really improving massively" but hoped he would be back to as close to full fitness as possible for Budapest, the last race before the August break.

Hamilton leads teammate Valtteri Bottas, who failed to finish on Sunday, by 41 points after winning seven out of 11 races so far.

Hamilton, who has a diverse range of interests outside Formula One including music and fashion, has often been criticised for his globe-trotting lifestyle but has never allowed that to get in the way of his on-track performance.

Two titles and 11 wins shy of Michael Schumacher's all-time record tally, the Briton's error-riddled display on Sunday was uncharacteristic for a driver considered one of the sport's all-time greats.

"I'm only human," said Hamilton. "It was a mistake and mistakes happen."

His team boss Toto Wolff said it was only to be expected that Hamilton would not be on top of his game in the circumstances.

"Many of us wouldn't have considered being in a race car, but he did," the Austrian said on Sunday. "He did feel better today but you can't be physically in your best game when you've been ill for a few days."

Toro Rosso found themselves on a Formula One podium for the first time in 11 years on Sunday, as Daniil Kvyat took advantage of a dramatic, rain-hit ...
Motoring
2 years ago

Vettel says he is his own biggest critic

If Ferrari's Sebastian Vettel is feeling the pressure ahead of his home German Grand Prix at Hockenheim, then he knows who to blame
Motoring
2 years ago