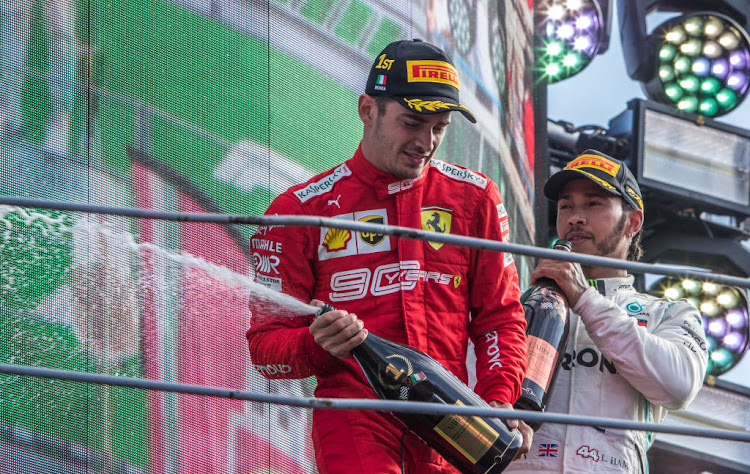 Charles Leclerc, left, celebrates next to third-placed Lewis Hamilton after the Italian Formula One Grand Prix at the Autodromo Nazionale circuit in Monza on September 8 2019.
Image: Robert Szaniszlo/NurPhoto via Getty Images

Lewis Hamilton plans to have a private word with Ferrari's Charles Leclerc after being squeezed off the track by the Italian Grand Prix winner on Sunday.

Stewards showed the 21-year-old Monegasque the black and white flag, equivalent to a yellow card in soccer, after he closed the door on Hamilton as Mercedes's five-times world champion tried to pass.

"He didn't leave me a car's width there, he pushed me off," exclaimed Hamilton over the team radio.

Speaking to reporters later, the runaway championship leader, who finished the race third, said he just wanted consistency from stewards.

"There was a rule put in place, and then it wasn’t abided by today, and they used different consequences for the rule today, but I don't really know why that was the case," explained the Briton.

"I guess the stewards woke up on a different side of the bed this morning. I don’t know."

Charles Leclerc again set the pace for Ferrari as the Italian team led a crash-strewn first practice for their home grand prix at a soggy Monza on ...
Sport
2 years ago

Hamilton nonetheless congratulated Leclerc on a job well done, the pole-sitter taking his second win for Ferrari in the space of eight days, after a first triumph in Belgium.

"I gave him as much pressure as I could and we had a couple of close moments. We could probably talk about it in private together, but it’s nothing major and we continue to race," he said. "I’m looking forward to many more races together."

Leclerc led through the first corner, with Hamilton slotting into second and giving chase.

The two duelled, going wheel to wheel at times, until Hamilton's tyres faded.

Leclerc said he thought he had left enough room, but acknowledged also that he had taken a more aggressive approach to his racing since losing out to Red Bull's Max Verstappen in Austria.

In that race, the Dutchman forced Leclerc wide, but kept the win after a stewards' inquiry.

"I think since Austria it’s clear that we can go a bit further in the way that we defend and overtake," said the Monegasque.

"I believe that Austria helped me to change this approach and today it’s also thanks to this that I’ve managed to win. It was obviously very on-the-limit, but I’m happy to race like this."

Charles Leclerc ended Ferrari's Italian Grand Prix win drought on Sunday with the team's first Formula One victory in front of their home fans since ...
Motoring
2 years ago

Australian Formula Three driver Alex Peroni walked away from a huge airborne crash at the Italian Grand Prix on Saturday, a week after French F2 ...
Motoring
2 years ago

Lewis Hamilton emphasised his loyalty to Mercedes on Thursday while leaving open the possibility that he might one day be tempted to race for Formula ...
Motoring
2 years ago