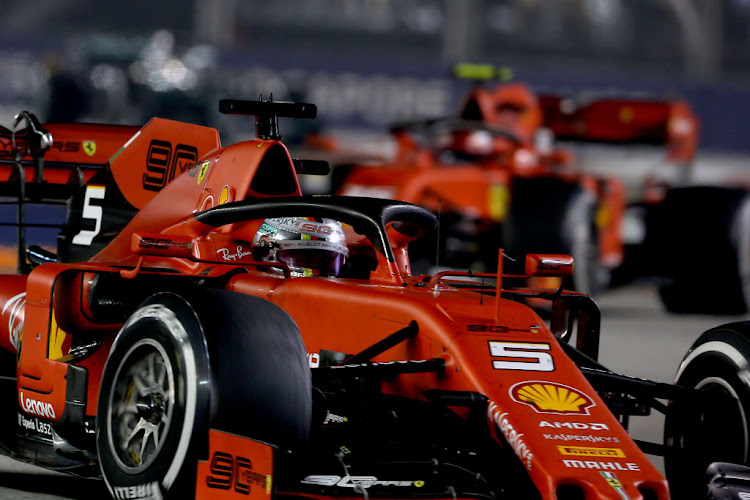 Ferrari sprung a Singapore surprise on Sunday that blindsided not only their Formula One rivals but left even the Italian team stunned.

It was the first time any team had finished first and second at the race since it first featured in 2008.

Despite Leclerc’s back-to-back success in Belgium and at Ferrari’s home race in Italy, only a brave punter would have put money on the red cars to achieve the feat before the weekend started.

The circuit's many-cornered layout was more likely to favour Mercedes or Red Bull while Ferrari had not won three races in a row since 2008.

"If you look at the hard facts, then we came here after we got completely destroyed in Hungary," said Vettel, referring to a similarly twisty race in August where Ferrari finished more than a minute behind Lewis Hamilton’s race-winning Mercedes.

"To be in a position where we were able to fight for pole yesterday and take control of the race, that’s a team success," added the German.

The Spa-Francorchamps and Monza circuits, with their long straights and flat-out blasts, had been expected to play to Ferrari’s strengths because their car has been fearsomely quick in a straight line.

It helped that Mercedes messed up their strategy in Singapore, but Leclerc still put his car on pole for the third race in a row.

"It’s like all good knockout punches, nobody saw this coming," 1996 world champion Damon Hill told Sky Sports. "On Saturday morning nobody saw any signs of Ferrari winning this race."

The Singapore one-two, achieved amid some controversy with Vettel benefiting from an earlier stop to leapfrog early leader Leclerc, was Ferrari’s first since the 2017 Hungarian Grand Prix.

With Vettel making mistakes and struggling in recent races, the outcome made Mercedes - who started the year with five successive one-two finishes - sit up and take notice.

Even if they are well on their way to a sixth title double with Lewis Hamilton, the fear is of dominance and momentum slipping away.

"We’ve got to be worried and on your toes all the time," said Mercedes boss Toto Wolff, whose team have won 10 of this season’s 15 races and are a comfortable 133 points clear of Ferrari in the overall standings with six races left.

"We cannot rest on our laurels from the beginning of the season and on a solid point gap, because that can catch you out."

Vietnam Grand Prix organisers are confident their race will join Singapore in lighting up the Formula One calendar for years to come, rather than ...
Motoring
2 years ago

Nico Hulkenberg feels his Formula One future is out of his control with the German running out of options for when he leaves Renault at the end of ...
Motoring
2 years ago

Formula 1 leader Lewis Hamilton no longer a follower on Instagram

Lewis Hamilton leads the way in Formula One and the Mercedes driver is not a follower on social media platform Instagram either, after changing his ...
Motoring
2 years ago