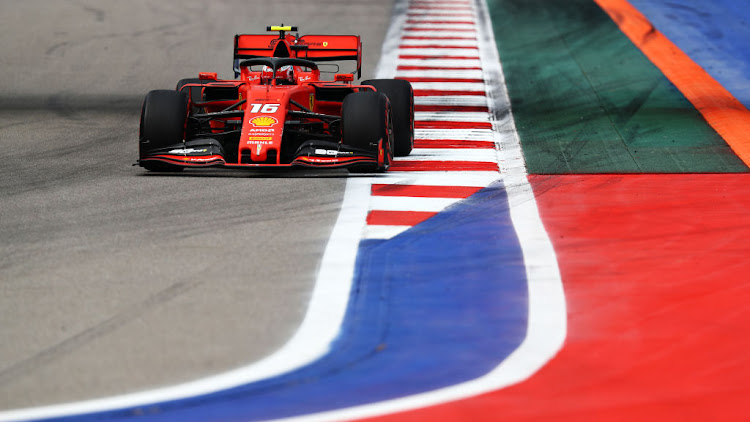 Charles Leclerc of Monaco driving the (16) Scuderia Ferrari SF90 on track during practice for the F1 Grand Prix of Russia at Sochi Autodrom on September 27, 2019 in Sochi, Russia.
Image: Mark Thompson/Getty Images

The Monegasque, left fuming after Ferrari strategy denied him a third consecutive win in Singapore last week, lapped the 5.8-km Sochi track in one minute, 34.462 seconds.

Sebastian Vettel, who 'undercut' Leclerc to win for Ferrari in Singapore, was third 0.543 seconds off his team mate's pace.

The German, whose triumph at the Marina Bay track ended a 13-month victory drought for the four-time champion, was ahead of Valtteri Bottas and Lewis Hamilton.

The Mercedes pair were nearly a second off the pace but set their fastest times on the slower medium compound tyre compared to the grippy soft compound rubber used by the Ferrari and Red Bull drivers.

Hamilton, who has won eight races this season, leads Bottas by 65 points in the overall standings and is 96 points clear of Verstappen and Leclerc, his closest non-Mercedes challengers who are joint third.

Mercedes, winners of 10 of this season's 15 races, lead Ferrari by 133 points in the constructors' championship with just six rounds to go, including Sunday's Russian event.

But the Italian team have won the last three races in a row, including a one-two finish at the last race in Singapore.

A fourth successive triumph in Russia, where Mercedes have never been beaten, will set alarm bells ringing at the German team, even if Ferrari's resurgence looks unlikely to stop Hamilton and the Brackley-based outfit's march to a record sixth title double.

Outside the top five, British-born Thai rookie Alexander Albon was sixth for Red Bull ahead of Renault's Nico Hulkenberg.

The German's team mate Daniel Ricciardo was eighth but the Australian spun backwards into the barriers in the closing stages of the 90-minute session and crawled back to the pits with a dislodged rear wing.

Mexican Sergio Perez was ninth for Racing Point ahead of Frenchman Romain Grosjean, who rounded out the top 10 for US-owned team Haas.Home hero,

Daniil Kvyat, the only Russian on the grid, parked up early in the session with a suspected fuel system problem. The Toro Rosso driver, already set to start Sunday's race from the back of the grid due to engine-related penalties, completed just five laps.

Several drivers had minor off-track moments or spins, as they tested the limits of the circuit. Hamilton went wide at the start of his first timed lap and later came on the radio to complain of problems with his brakes.

The five-time champion also had a close call with Grosjean at the entry to the pit lane and had to take evasive action to avoid hitting the slower Haas car.

Max Verstappen will have a five-place grid penalty and Daniil Kvyat will start his home Russian Formula One Grand Prix from the back of the field on ...
Motoring
1 year ago