Ferrari faces the fallout of two roosters in one henhouse 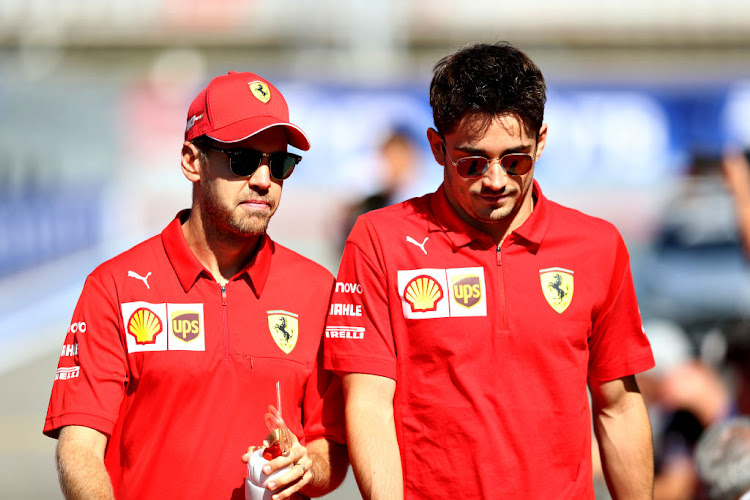 Charles Leclerc of Monaco and Ferrari and Sebastian Vettel of Germany and Ferrari on the driver's parade before the F1 Grand Prix in Sochi, Russia, on September 29. The gloves seem to be coming off between the Ferrari drivers.
Image: Mark Thompson/Getty Images

Ferrari put two roosters in the same henhouse when they paired Sebastian Vettel with Charles Leclerc, and now they are facing the fallout.

Vettel, a four-times Formula One champion once seen as the successor to Michael Schumacher, would have expected to be the main man in his fifth year in red overall, but Leclerc, Ferrari's youngest winner, has made short work of that.

The 21-year-old Monegasque has made his presence felt, and the pressure cooker is starting to whistle, as heard in "team orders" radio exchanges relayed to a global audience in Singapore two weeks ago and Sunday's Russian Grand Prix.

Leclerc has more points, more podiums, poles and wins in 2019 than Vettel, who is on the brink of being mathematically ruled out of the title chase, and whose future has been questioned.

The youngster has out-qualified his team mate for nine races in a row, taking four consecutive poles – the first Ferrari driver to do so since Schumacher – and winning in Belgium and Ferrari's home race at Monza.

On Sunday, the commotion came when Vettel was instructed to hand back the lead gained through slip-streaming Leclerc as part of a pre-race pact.

The German's immediate response was to speed up, point out that Leclerc was too far behind and say he would have passed him anyway.

Leclerc's response, emphasising that he had been "put behind" and expected redress, suggested the gloves were coming off.

More flare-ups can be expected, even if Ferrari publicly doused the flames this time, as the elder statesman contends with a self-assured youngster who has plenty of pace and threatens to steal his throne.

"It shows you that it's not trivial at all to manage two drivers who have the aspiration to win," commented Mercedes boss Toto Wolff, who had to manage the fallout of Lewis Hamilton and Nico Rosberg battling for wins and titles from 2013 to 2016.

"As a team we have been through these situations, and it’s certainly not easy."

Hamilton and Rosberg got on well until the championship battle became real and the relationship froze.

In Schumacher's day, Ferrari had a clear number one while Fernando Alonso left no doubt about who held sway during his years at Maranello before Vettel slotted into the role.

"I don't like that and it creates instability in the team."

Vettel did eventually arrive in 2015, joining 2007 world champion Kimi Raikkonen who rarely rocked the boat at a time of Mercedes domination.

Even if this year's championships are out of reach, with Vettel retiring in Sochi and Leclerc third behind a Mercedes one-two led by Hamilton, Ferrari's pace and progress have their rivals on notice for 2020.

Leclerc and Vettel could be truly in the mix next season for the team's first title in more than a decade. The stakes are rising and neither is about to stand back and wave the other through with a smile.

Asked whether he could still trust Vettel after Sochi, Leclerc was a model of diplomacy.

"We need to trust each other because it's usually important for the benefit of the team in some situations to know that you can count on each other in the car and vice-versa."

Hamilton wins in Russia to end Ferrari's run of success

Formula One world champion Lewis Hamilton won the Russian Grand Prix in a Mercedes one-two on Sunday to end resurgent Ferrari's run of success and ...
Motoring
1 year ago

Kubica to leave Williams at end of 2019 Formula 1 season

Robert Kubica will leave former champions Williams at the end of the season, a move likely to bring the curtain down on the Polish driver's ...
Motoring
1 year ago