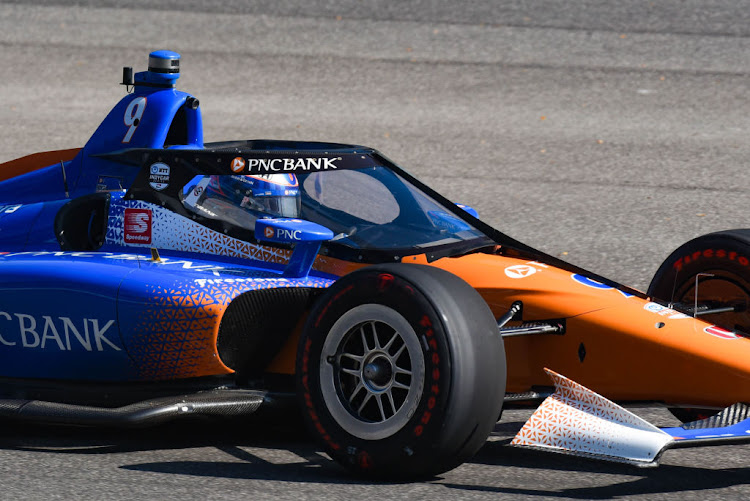 Chip Ganassi Racing driver Scott Dixon (9) of New Zealand pulling out of his pit box during the first test of the aeroscreen designed by Red Bull Advanced Technologies (RBAT) on October 2, 2019 at the Indianapolis Motor Speedway in Indianapolis, Indiana.
Image: James Black/Icon Sportswire via Getty Images

Former Indianapolis 500 winners Scott Dixon and Will Power tested IndyCar's new cockpit protection device on Wednesday and both drivers gave the aeroscreen a thumbs up and said it was already fit for racing.

The aeroscreen, which is designed to protect drivers from flying debris, covers the open-air cockpit and is anchored by a titanium framework surrounding the driver.

Both drivers tested the aeroscreen at the Indianapolis Motor Speedway and after their sessions said they could not imagine driving without one on their car.

“When you've driven it for a day, you're going to feel naked without it,” Team Penske's Power told a conference call.

“If you took it off, you'd feel pretty naked because there's not much protection there. So very happy that we're moving ahead with it,” he added.

Power said he felt the aeroscreen would make drivers feel so much safer that it will prolong racing careers.

“I can remember a couple of times in the last five years on a superspeedway, there had been a big crash – actually Scott's was one of them, and I actually went like that with my arm, not that that's going to stop anything, it's going to kill you,” said the 38-year-old Australian.

“But that's how much stuff you see flying towards your head and how lucky you really get to get through all that stuff.

“Any time you're on a superspeedway and there's a big crash, it's just luck really to me. It's just a matter of time until someone got caught again. So yes, having a family and all that, you probably won't think about retiring quite so soon,” he said.

Five-times NTT IndyCar Series champion Dixon, who tested a prototype on a simulator in July, said the aeroscreen made it a little awkward getting into the car and that drivers may want to allot more time when getting behind the wheel.

But both drivers felt the aeroscreen was seamless and New Zealander Dixon of Chip Ganassi Racing called it “good to go”.

“Ultimately it's just very quiet. I can hear my radio for a change. Normally I can't hear that. So that's kind of nice,” said Dixon.

“But yeah, there's actually a lot less load on the helmet, too, so visually there's been really no impairment.”

IndyCar has three more tests scheduled over the next five weeks and aeroscreens are to be delivered to all NTT IndyCar Series teams before the end of the year and implemented for the 2020 season.

After a 37-year absence the legendary Kyalami 9-Hour is back to enthrall motorsport fans with a heady mixture of glamour, guts and raw speed. These ...
Motoring
1 year ago

Sebastian Vettel and Charles Leclerc are a "potentially explosive combination" who need to be handled with care by Ferrari, the team's former ...
Motoring
1 year ago

The Toro Rosso name could disappear at the end of the Formula One season with the Italy-based team seeking to race in future as Alpha Tauri, a ...
Motoring
1 year ago