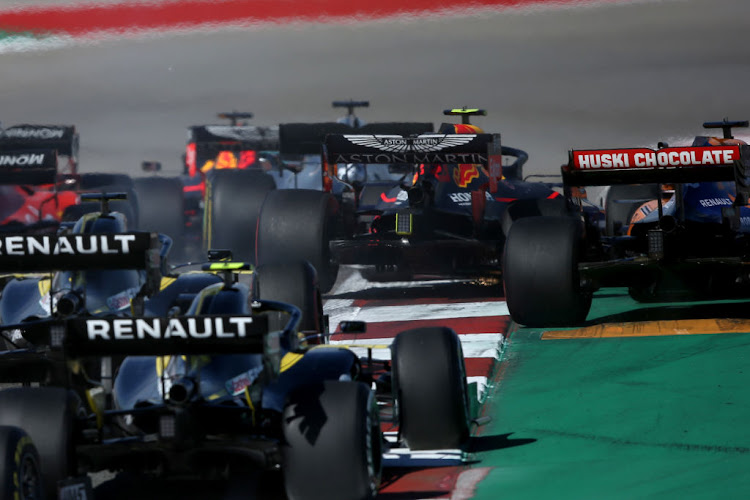 Drivers battle for position at the start of the F1 Grand Prix of USA at Circuit of The Americas on November 3 2019 in Austin, Texas.
Image: Charles Coates/Getty Images

The battle to be best of the rest behind the Mercedes drivers heats up in Brazil this weekend with Charles Leclerc, Max Verstappen and Sebastian Vettel chasing Formula One's bronze medal position.

Even if Mercedes have clinched both titles, with Lewis Hamilton securing his sixth in Texas, there remain some bragging rights to be had as the 21-race season heads into the penultimate round.

There are also millions of dollars at stake for mid-table teams jostling for position in the constructors' standings that determine prize money payouts.

Ferrari's Leclerc is third in the drivers' standings but facing a likely 10-place grid penalty at Interlagos as he seeks to defend a 14-point lead over Red Bull's Verstappen, who is in turn five clear of Ferrari's Vettel.

“I think it’s still going to be hard,” said Verstappen when asked about closing the gap.

“We need a bit of luck as well for that, but I will give everything. Of course we had some really unlucky results but ... they (Ferrari) should have been miles ahead of us over the whole year.

“It’s been a good season in that way, that we’re actually still in there. I’ll definitely try to get it (third)," added the 22-year-old.

Ferrari have responded angrily after Red Bull driver Max Verstappen suggested the Italian team's poor performance at the US Grand Prix was linked to ...
Motoring
2 years ago

Interlagos is an old-style circuit, with an exuberant local crowd likely to be giving Hamilton plenty of love, and Vettel is a three times winner there.

“I think overall it’s been a good hunting ground for us and hopefully it will be like that again this weekend,” said Germany's four times world champion.

Hamilton and team mate Valtteri Bottas will be looking to carry momentum on to Abu Dhabi and into the winter break, with the Briton on 83 career wins and eager to close the gap on Michael Schumacher's all-time record of 91.

“We have two races to go in the 2019 season and we want to end this season on a high,” said team principal Toto Wolff, who will not be in Brazil — the first race he has missed since 2013.

Ferrari and Red Bull are also looking ahead, their second and third positions secure in the constructors' standings.

“In the coming races we are still going to try things on the car to give us new ideas for next year,” said Verstappen, winner of two races this year. “Not necessarily 2020 parts already, but definitely directions.”

Further down the pecking order, the fiercest battle is between Renault, Racing Point and Toro Rosso. Renault are fifth and 18 points clear of Racing Point, who are only one point ahead of seventh-placed Toro Rosso.

“The point we scored in America helped move us up to sixth place in the championship and mathematically we can still aim for fifth,” said Racing Point team boss Otmar Szafnauer.

“There’s lots at stake and lots to fight for, so we need to maximise the opportunities this weekend.”

Champions Mercedes are likely to stay in Formula One after major changes come into play in 2021, but that cannot be taken for granted, team principal ...
Motoring
2 years ago

British-born Thai racer Alexander Albon will continue to partner Max Verstappen at Red Bull in 2020, the Formula One team announced on Tuesday
Motoring
2 years ago