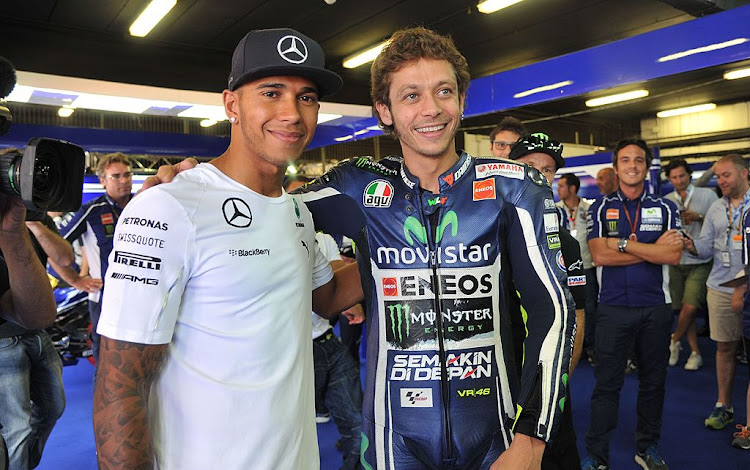 Lewis Hamilton, left, and Valentino Rossi at the MotoGP of Catalunya in Spain on June 15 2014.
Image: Europa Press/Europa Press via Getty Images

Six-times Formula One world champion Lewis Hamilton and MotoGP great Valentino Rossi are preparing for a ride swap in Spain on Monday, with the Briton “super excited” at the prospect.

Hamilton, who collected his F1 champion's trophy at an FIA gala in Paris on Friday, will head to Valencia's Ricardo Tormo circuit for the closed event, organised by mutual sponsor Monster.

“I think me and @LewisHamilton will have some fun soon,” Rossi teased on his Instagram feed, next to a picture of him sitting in a Mercedes F1 car.

The 40-year-old Italian, a nine-times world champion, with seven of those coming in the top MotoGP class, will drive a 2017 Mercedes, while Hamilton gets to ride Rossi's Yamaha.

Rossi has driven a Formula One car several times with Ferrari between 2004 and 2010, when there was speculation he could follow in the tracks of late Britons John Surtees and Mike Hailwood, and switch from two wheels to four.

Four-times 500cc world champion Surtees remains the only man to win the Formula One title (in 1964), as well as top motorcycling honours.

Hamilton is also a keen motorcycle rider, riding to some European tracks and testing a Yamaha superbike, but never a MotoGP machine.

“Just being on the same track at the same time as Valentino is going to be very, very surreal and a real honour, because he’s such an icon in the sport and he’s done so much. It’ll be cool to see him in my car as well.”

Technical director Nick Chester is departing from the Renault Formula One team and has been placed on a period of “garden leave”, they announced on ...
Motoring
1 year ago

George Russell, the only Formula One driver without a point this year, swapped his tail-end Williams for a title-winning Mercedes on Wednesday and ...
Motoring
1 year ago