WATCH | How does Bloodhound stack up against other fast cars? 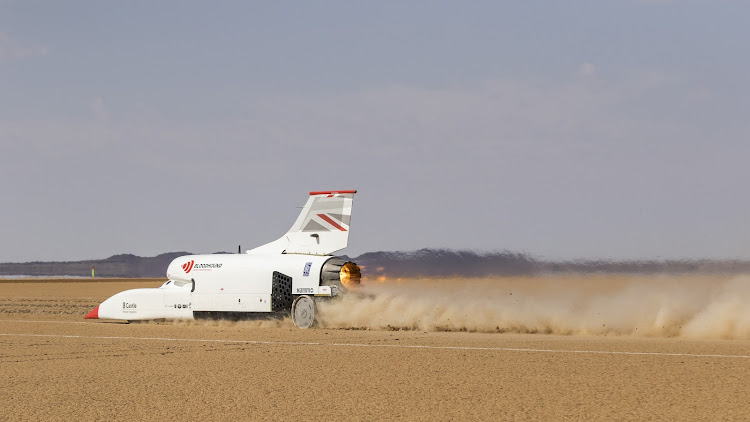 In November Bloodhound LSR achieved 1,010km/h at Hakskeen Pan in the Northern Cape in a high-speed test.
Image: Supplied

Have you ever wondered how the speed and acceleration of a jet-powered land speed record car compares with other fast cars?

The Bloodhound Land Speed Record team has released a video showing how its machine would stack up against a Formula 1 car, a Bugatti Chiron (the world's fastest sports car), and a regular road car.

For fun, it crunched the numbers and pitted them side by side in the desert.

Some poetic licence has inevitably been applied, as it was impossible to factor for traction on the dusty desert surface, which is estimated to be about one-third that of a regular tarmac.

“This is, of course, not an issue for Bloodhound LSR as she’s thrust-driven,” says a team spokesperson.

The state-of-the-art EJ200 Eurofighter military aircraft jet engine takes some time to spool up and start producing thrust, and a few seconds longer to be up to speed to use reheat (aka afterburners) — where flames are seen shooting out of the back of the car.

When Bloodhound LSR returns to the Kalahari Desert for the record-breaking campaign it will in addition be fitted with Nammo’s rocket which will provide a further 50 to 60 kilonewtons (kN) of thrust. This, combined with the 90kN of the existing jet engine (the combined output of 360 family cars), is hoped to provide enough power to beat the existing 1,228km/h land speed record — faster than the speed of sound — set by Andy Green in a car called Thrust SSC in 1997.

In November Bloodhound LSR, with Green behind the wheel, achieved 1,010km/h at Hakskeen Pan in the Northern Cape in a high-speed test. It was the equivalent of taking just 1 hour and 23 minutes to drive the 1,400km from Johannesburg to Cape Town.

Covid-19 has inevitably had an impact on discussions with potential sponsors, so the team has taken the decision to hibernate the project until the pandemic has passed. This will have an impact on the planned 2021 World Land Speed Record attempt at Hakskeen Pan.

Ian Warhurst, Bloodhound’s CEO said: “Rightfully, the world has more important things to focus on right now. Discussions with a number of global brands were looking promising when Covid-19 struck, but the sponsorship industry literally shut down.

“This means our ability to raise the necessary funds in time and, consequently, the window to conduct the LSR campaign safely in 2021 is now very likely to be missed. As a result, we are planning to go into hibernation to reduce the monthly overheads to an absolute minimum, and we’ll reboot conversations with potential sponsors later in the year.

He continued: “In the meantime we thought you might enjoy our latest film, where we imagined drag racing Bloodhound LSR against some other very fast cars.”

Chief engineer Mark Chapman talks about what needs to be fixed to set a new record.
Lifestyle
1 year ago

About 11,000m above the Hakskeen Pan in the Northern Cape, passenger planes cruise past at 800km/h
News
2 years ago