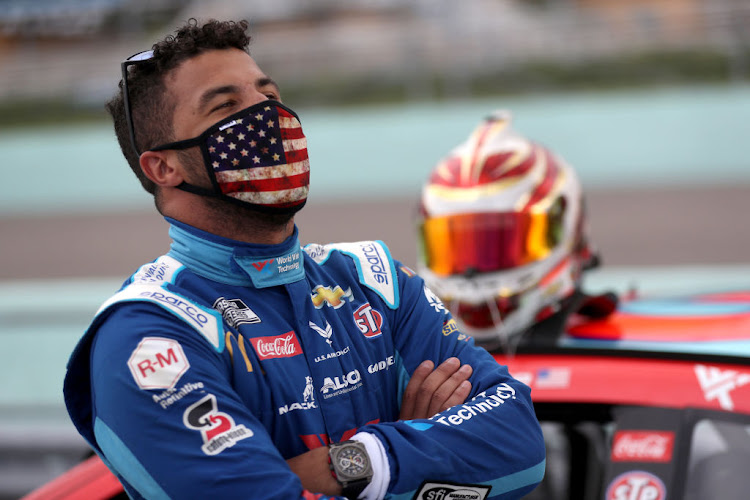 Bubba Wallace said the incident "is a painful reminder of how much further we have to go as a society and how persistent we must be in the fight against racism".
Image: Chris Graythen/Getty Images

Nascar has launched an investigation after a noose was found in a garage stall at Talladega belonging to Bubba Wallace, the only black driver competing in its top Cup series.

"Late this afternoon, Nascar was made aware that a noose was found in the garage stall of the 43 team," Nascar said in a statement on Sunday.

"We are angry and outraged, and cannot state strongly enough how seriously we take this heinous act.

"We have launched an immediate investigation, and will do everything we can to identify the person(s) responsible and eliminate them from the sport.

"As we have stated unequivocally, there is no place for racism in Nascar, and this act only strengthens our resolve to make the sport open and welcoming to all."

Wallace slammed the "despicable act of racism and hatred".

"It leaves me incredibly saddened and serves as a painful reminder of how much further we have to go as a society and how persistent we must be in the fight against racism," the 26-year-old said in an Instagram post.

"Together, our sport has made a real commitment to driving real change. Nothing is more important and we will not be deterred by the reprehensible actions of those who seek to spread hate."

Earlier this month, Nascar banned the Confederate flag from all races as the sport moved to distance itself from a checkered past on race amid global protests against the death of George Floyd while in Minneapolis police custody.

However, before Sunday's GEICO 500 at Talladega in Alabama, a plane flew above the track with the flag and a second banner that read "Defund Nascar".

Six-time world champion Lewis Hamilton can expect a quicker car when the Formula One season finally starts in Austria next month, with Mercedes ...
Motoring
1 year ago

Two times German Touring Car (DTM) champion Rene Rast will replace Daniel Abt at Audi's Formula E team for the remainder of the season, the ...
Motoring
1 year ago