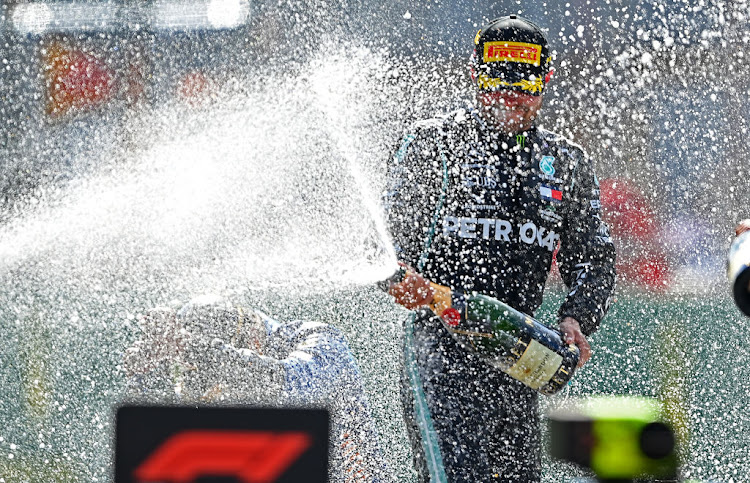 Race winner Valtteri Bottas of Finland and Mercedes GP celebrates on the podium during the Formula One Grand Prix of Austria at the Red Bull Ring on Sunday in Spielberg, Austria.
Image: Clive Mason - Formula 1/Formula 1 via Getty Images

Valtteri Bottas can make Formula One history in Austria on Sunday as the first driver to win twice at the same circuit in a single season, but the Finn knows plenty can change in the space of a week.

The first Styrian Grand Prix, named after the southern Austrian state that surrounds Spielberg's Red Bull Ring, is a new name for a familiar race.

For the first time, a circuit is hosting back-to-back races — a situation resulting from the Covid-19 pandemic. Bottas, winner of last Sunday's Austrian opener from pole position, has a good chance of doing the double.

The race will again be without spectators, but those expecting the second race to be the same as the first in all other respects are likely to be disappointed.

“The reality is that we were fortunate to finish the race,” Mercedes team boss Toto Wolff said of the electrical problems experienced last Sunday.

“Reliability caused us real concern and it is something we are working on as our highest priority. In a shorter season with a yet-to-be-determined number of races, every point counts, so we need to improve quickly on that front.”

Six-time world champion Lewis Hamilton, Bottas's teammate, was hampered by both a three-place grid drop and a time penalty last Sunday. That particular lightning is unlikely to strike twice.

Red Bull's Max Verstappen, winner in 2018 and 2019 at his team's home circuit, and Alex Albon would have to be doubly unlucky to draw blanks for a second weekend in a row.

“Whatever we found wasn’t perfect last weekend we can improve this week,” said Verstappen. “It looks like it could rain this week and I’m not sure anybody knows how competitive they are in the wet with these new cars, so that could be interesting.”

Ferrari's Charles Leclerc and McLaren's Lando Norris, who took surprise podiums in a race of only 11 finishers, may struggle to repeat that success — even if Ferrari are speeding up planned updates.

“One thing I've learnt about race cars in 20 years or something of doing this, whether its go-karts or F1, is a track can change from one day to the next,” said Renault's Daniel Ricciardo, who failed to finish last Sunday.

“A car can feel great one day and not great the next. Things can change ... I'm not promising a completely different scenario, but I wouldn't also promise the same. I wouldn't bet exactly on a copy-paste,” added the Australian.

Age is not the issue, says returning Alonso

Ferrari are planning to speed up the introduction of upgrades to their under-performing Formula One car after a difficult season-opening race in ...
Motoring
1 year ago

Vettel is bound to be distracted by Ferrari axe, says Brawn