Lewis Hamilton wants Ferrari to do more in fight against racism 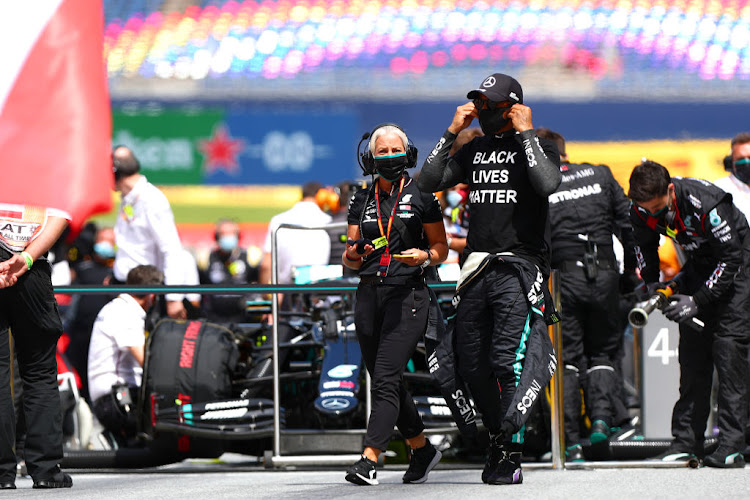 Lewis Hamilton of Great Britain and Mercedes GP prepares to drive wearing a Black Lives Matter shirt on the grid before the Formula One Grand Prix of Styria at Red Bull Ring on July 12, 2020 in Spielberg, Austria.
Image: Dan Istitene - Formula 1/Formula 1 via Getty Images

Six times Formula One world champion Lewis Hamilton praised his Mercedes team for taking a stance against racism but said after winning Sunday's Styrian Grand Prix that Ferrari and others should do more.

The Briton took a knee with 11 drivers before the race while wearing a Black Lives Matter T-shirt and then gave a raised fist salute on his car and on the podium after winning at the Red Bull Ring.

It was the second weekend in a row that drivers have knelt before the start, though not all have done so. Taking a knee has become a common act of protest against racism and police brutality since the killing on May 25 of George Floyd, a Black American, by a white police officer in Minneapolis unleashed a global outpouring of sadness and outrage.

The gesture was not part of the official programme, as it had been before the season-opener at the same Austrian circuit when Formula One and teams emphasised an antiracism message.

“We've seen Red Bull's mechanics take a knee, which I think is great, but as businesses and as teams ... if you look at Ferrari who have thousands of people working with them, I've heard no word of Ferrari saying that they hold themselves accountable, and this is what they're going to do for their future,” the sport's only Black driver told reporters.

“And we need the teams to do that. We need Formula One and the FIA to be more leading in those scenarios, saying, 'hey guys, all of us together, everyone needs to pull together and fight for this.'

“I think a lot of people don't know what the problem is,” added Hamilton, who has set up a commission to push for equal opportunity and more diversity in motorsport. “Some people deny there is a problem.”

There was no immediate comment from Ferrari, whose race on Sunday lasted about 20 seconds until Sebastian Vettel and Charles Leclerc collided.

Vettel has knelt alongside Hamilton before both races, however, while Leclerc remained standing but with 'End Racism' on his shirt.

“Formula One left us the choice to express ourselves in the way we wanted,” Leclerc said. “It was clearly written on our shirt to end racism, which is the main message we want to pass through.”

Charles Leclerc apologised to Ferrari and his team mate Sebastian Vettel on Sunday after causing a first-lap collision that put both drivers out of ...
Motoring
1 year ago