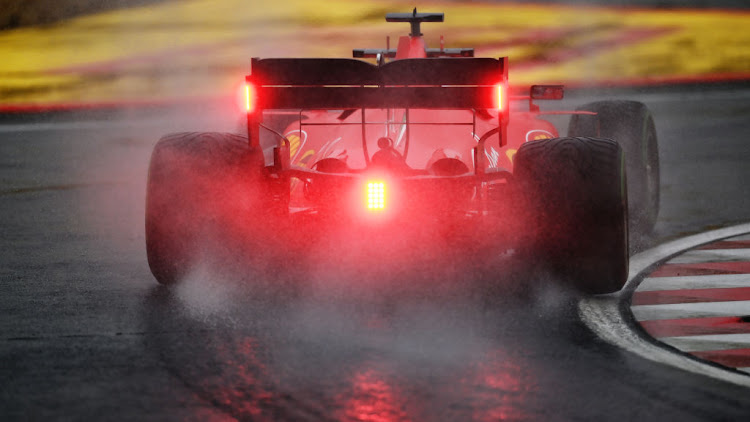 Sebastian Vettel of Germany driving the (5) Scuderia Ferrari SF1000 during practice for the F1 Grand Prix of Hungary at Hungaroring on July 17, 2020 in Budapest, Hungary.
Image: Clive Mason - Formula 1/Formula 1 via Getty Images

Six-time Formula One world champion Lewis Hamilton started his bid for an eighth Hungarian Grand Prix victory on Friday with the fastest lap in practice before afternoon rain slowed everybody down.

The Briton led team mate Valtteri Bottas in a dominant Mercedes one-two in the first session at the Hungaroring, but did not set a time in the soggy later one after attempting an installation lap.

The Briton's best lap of the day in one minute 16.003 seconds at the twisty track was 0.086 quicker than championship leader Bottas, despite being on harder tyres than the Finn.

“It was a great first session, got everything we needed to do,” said Hamilton, who hoped for a dry race on Sunday.

“It's a shame that it's rained today. It's strange to think that we're in summer yet faced with this weather the last two weekends. It didn't really leave a lot for us to do in that session.

“We got through what we needed to get through, it was feeling OK.”

Ferrari's Sebastian Vettel, a four-time world champion who collided with team mate Charles Leclerc at the previous race in Austria, topped the afternoon time sheets but with a slow time of 1:40.464. The German did just 12 laps.

Bottas did five laps in the afternoon and was again second, 0.272 slower, while Leclerc was 10th.

Stroll was fourth in the second session, with Perez fifth. McLaren's Ferrari-bound Spaniard Carlos Sainz, who replaces Vettel in 2021, was third fastest.

Perez — whose place at the team appears uncertain for next year despite having a long-term contract — was half a second off the leading Mercedes' pace but a further 0.437 quicker than Stroll.

The Racing Point cars, copies of last year's title-winning Mercedes, were protested by Renault at the previous Styrian Grand Prix in Austria with the governing FIA still investigating.

Renault's Daniel Ricciardo, a previous winner in Hungary with Red Bull, was fifth fastest in the morning but did not set a time later on.

Hamilton is six points behind Bottas after they each won a race in Austria, the Finn taking the season-opener and the champion the second at the same Red Bull Ring.

The Briton has won a record seven times in Hungary and an eighth victory would equal Ferrari great Michael Schumacher's record number of wins at the same grand prix, the German achieving that in France.

Ferrari and McLaren, historically Formula One's two most successful teams, signalled on Friday they were ready to sign a new 'Concorde Agreement' ...
Motoring
2 years ago

French driver Romain Grosjean and Haas Formula One team boss Guenther Steiner each detected a metaphorical elephant in the room at the Hungarian ...
Motoring
2 years ago