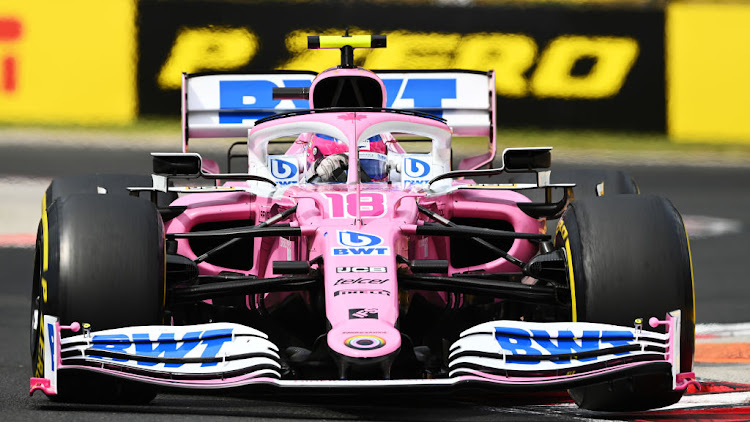 Lance Stroll of Canada driving the controversial Racing Point RP20 Mercedes during the Formula One Grand Prix of Hungary at Hungaroring on July 19 in Budapest.
Image: Clive Mason - Formula 1/Formula 1 via Getty Images

On Sunday Renault lodged an official protest for the second race in a row at the Hungarian Grand Prix against Formula One rivals Racing Point, questioning the legality of their Mercedes-lookalike car.

The French manufacturer team first protested after the Styrian Grand Prix in Austria on July 12, with stewards investigating.

Repeat protests had been expected, with Renault allowed to continue to lodge them at all races until the matter is resolved.

Racing Point principal Otmar Szafnauer told reporters the ducts were legal and the team would be using them again at the next British Grand Prix at Silverstone.

"Brake ducts take a long time to design and make. They are very, very complicated. We have 886 individual drawings for our brake ducts," he said.

"I don't think it will go against us, but if it does for sure we'll appeal," he said.

"We didn't contravene any sporting or technical regulation with our brake duct, or any other part of the car for that matter."

This year's Racing Point car has been dubbed the "Pink Mercedes" because of its striking similarity to last year's title-winning W10. The team have close ties with Mercedes and use the same engines and gearboxes.

Certain parts of Formula One cars are listed, however, meaning individual teams must design their own. The brake ducts were not listed last year, but they are for 2020.

Racing Point are now fourth in the constructors' championship, one point behind third-placed McLaren. Renault are sixth.

Lewis Hamilton wins in Hungary to take back championship lead

Lewis Hamilton won the Hungarian Grand Prix for a record eighth time on Sunday to wrest the Formula One championship lead from Mercedes team mate ...
Motoring
11 months ago

Reigning world champion Marc Marquez of Honda broke his right arm in a crash at the season-opening Spanish Grand Prix on Sunday, his team has ...
Motoring
11 months ago