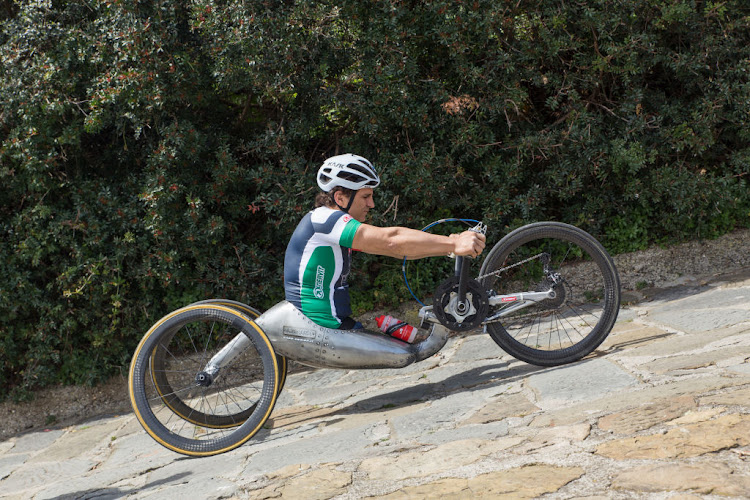 Italian former F1 driver and Paralympic champion Alex Zanardi has been transferred to a specialist recovery centre, a month after suffering serious head injuries in a handbike accident, the hospital treating him said on Tuesday.
Image: Matteo Nardone/Pacific Press/LightRocket via Getty Images

Italian former Formula One driver and Paralympic champion Alex Zanardi has been transferred to a specialist recovery centre, a month after suffering serious head injuries in a handbike accident, the hospital treating him said on Tuesday.

The 53-year-old was placed in a medically-induced coma and has had three operations at Siena's Santa Maria alle Scotte hospital since the accident during a road race near the Italian city on June 19.

Zanardi is an inspirational figure in the worlds of motorsport and Paralympic endeavour, a hugely popular and positive competitor who returned from life-changing injuries with a smile.

The hospital said in a statement that Zanardi's sedation had been suspended, allowing him to be transferred.

Former Formula One driver and Paralympic champion Alex Zanardi underwent further neurological surgery on Monday after being seriously injured in a ...
Motoring
11 months ago

"The stability of the general clinical conditions and the neurological picture allowed the transfer of the champion to a specialised centre for recovery and functional rehabilitation," it said.

"Alex Zanardi was therefore transferred today to another facility."

A double Champ Car champion in the US, Zanardi had to have both of his legs amputated above the knee following a horrific crash in a race in Germany in September 2001.

He recovered to return to the track in touring cars, before later taking up paracycling and winning four Paralympic gold medals.

Pope Francis wrote to him last month, calling his life a "lesson of humanity".

Red Bull see plenty of untapped potential in Alex Albon and are happy with the British-born Thai, according to team boss Christian Horner.
Motoring
11 months ago

Lewis Hamilton expects Silverstone to feel "super-weird" as he heads back to Britain on top of the Formula One world championship standings.
Motoring
11 months ago

The second race of the Ford Performance #LockdownLaps competition was run at Willow Springs International Motorsports Park on Saturday afternoon. And ...
Motoring
11 months ago