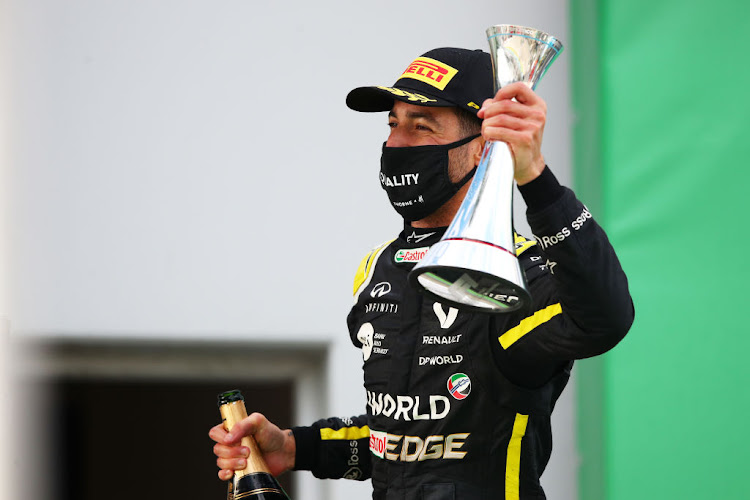 Daniel Ricciardo says he feels happier leaving a successful Renault than a struggling one after securing the French manufacturer's first Formula One podium since 2010.

The Australian, who is moving to McLaren at the end of the season, finished third in Sunday's Eifel Grand Prix at the Nürburgring after Mercedes' early leader Valtteri Bottas retired with a power unit problem.

“Next year's another story, I am moving on, but I think this really does cap a pretty cool story that we've had and shared for these two years,” he told Sky Sports. “I'm obviously OK with it and very positive and excited for next year, but I would much rather end on a high,” added the 31-year-old.

“People think it's easier to leave if we're struggling and, yeah OK, you're moving on to something better, but I don't want to struggle, period. I want to have success in every race.

“So to leave here with success, and on a positive and with the team — a lot of excitement, happiness, it's cool. I'm OK with everything right now and just really happy we've had a successful season.”

Renault's last podium in Formula One was with Poland's Robert Kubica in 2010, although the team then became Lotus and won in 2013 with Kimi Raikkonen in Australia. The French manufacturer returned as a constructor in 2016.

The team finished fifth last year, from fourth in 2018, and is fifth in a tight battle for third, with Racing Point and McLaren six and two points ahead respectively.

“The team has progressed, it's very visible since a few races,” he said. “We understand the car better, the set-up works better.

“There is something that clicked between Daniel, his car and his race engineer ... I think the confidence level has just improved but simply because he has got a better car, he's capable of doing what really he wants.”

WATCH | Ricciardo celebrates his F1 podium with a private 'shoey'

Daniel Ricciardo celebrated his first Renault Formula One podium on Sunday with a private champagne 'shoey' while pondering what kind of tattoo to ...
Motoring
1 year ago