Hamilton and Mercedes can break records in Portugal 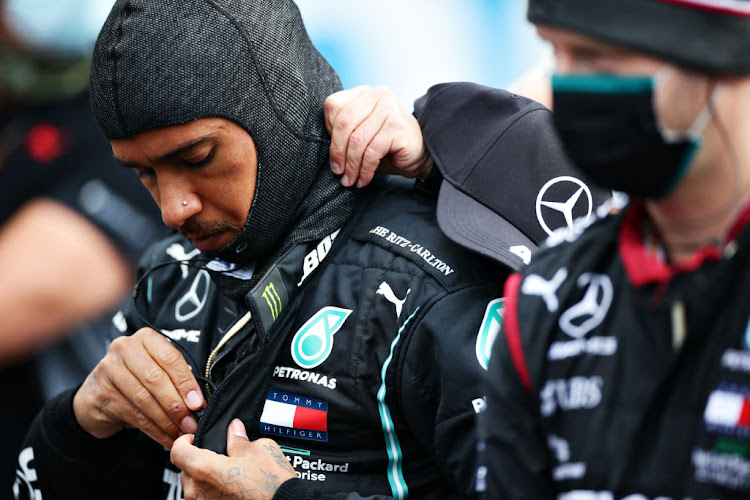 Lewis Hamilton and his Mercedes team can make Formula One history on Sunday as Portugal returns for the first time in 24 years on a calendar reshaped by the COVID-19 pandemic.

The six times world champion equalled Ferrari great Michael Schumacher's record 91 grand prix victories in the previous race at the Nürburgring and now has his first opportunity to go one better.

Mercedes meanwhile have their first chance to seal an unprecedented seventh successive constructors' title, although they may have to wait another weekend for the inevitable to be confirmed.

The champions will need to score 40 points more than closest rivals Red Bull for that to happen at Portimao's undulating Algarve International Circuit, which is hosting a grand prix for the first time.

Red Bull have drawn a blank twice in 11 races so far this season while Hamilton has won seven times and Finnish team mate Valtteri Bottas, now 69 points behind in the standings with six races to go, twice.

Mercedes have scored 40 points or more in six of the races, with three one-two finishes, but on all those occasions Red Bull managed to take at least 15.

Bottas retired with a power unit failure at the Nürburgring, a major blow to his slim title hopes, but Mercedes are on top of the problem.

"We have identified a failed electrical component in the control electronics as the cause of the problem and the evidence suggests that swift action in retiring the car prevented mechanical damage to his power unit," said team boss Toto Wolff.

Hamilton has gone well at circuits new to the calendar in the past and has won twice this year at tracks that would not have featured but for the pandemic - Italy's Mugello and Germany's Nürburgring.

While the Portuguese track is a novelty for Formula One, some current drivers have raced or tested there on their way to the top.

Hamilton tested in the Algarve with McLaren in 2009 while Bottas raced there in Formula Three, as did Ferrari's Charles Leclerc.

"The circuit is probably new to a lot of the guys with a few of them having experience there in junior levels," said Lando Norris, who did a two-day test there in 2017 in a 2011 McLaren.

"Not sure if it will give me a little bit of an edge on the drivers who are new to the track, but we’ll have to wait and see," added the McLaren driver.

The race will have spectators, but limited to 27,500 a day under local regulations to combat the spread of the new coronavirus.

Racing Point's Lance Stroll, the second F1 driver to contract Covid-19 after his Mexican team mate Sergio Perez, should be fit to race after missing the last round and testing negative on Monday.

Sunday's Portuguese Formula One Grand Prix will be limited to 27,500 spectators a day because of a rise in Covid-19 cases in the country, the ...
Motoring
1 year ago

Stroll reveals he tested positive for Covid-19 after Eifel GP

Canadian Formula One driver Lance Stroll said on Wednesday he had tested positive for Covid-19 after the October 11 Eifel Grand Prix but was now ...
Motoring
1 year ago

Vietnam's first Formula One grand prix has been officially cancelled due to the Covid-19 pandemic, organisers said on Friday
Motoring
1 year ago