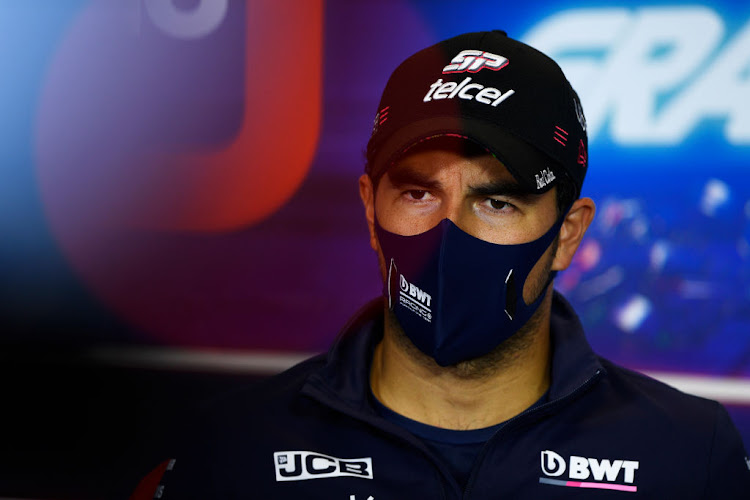 Sergio Perez of Mexico and Racing Point talks in the Drivers Press Conference during previews ahead of the F1 Grand Prix of Portugal at Autodromo Internacional do Algarve on October 22, 2020 in Portimao, Portugal.
Image: Rudy Carezzevoli/Getty Images

Williams refused to rule out a move for Sergio Perez on Friday as speculation mounted that the Mexican could replace George Russell at the tail-end Formula One team next season.

Acting team principal Simon Roberts was asked several times during a video news conference to confirm contracted drivers Russell and Canadian Nicholas Latifi would be staying and refused to do so.

Williams changed ownership in August, with US-based Dorilton Capital taking over. The team had previously confirmed both drivers for 2021.

“There’s lots of good drivers around that are looking for seats. Dorilton bought the team and nothing changed. I can’t say any more than that,” said Roberts.

Asked whether that meant the drivers were staying, he replied: “I'm not going to say anything about either of our drivers. They're both doing a great job.

“There’s so much speculation around, I don’t want to inadvertently fuel it.”

When it was pointed out that the team could end all speculation by ruling out a move for Perez, Roberts replied: “Possibly, but we just don’t want to say anything, one way or the other.

“We're here focusing on a race weekend. We haven’t got any news.”

Russell, the 2018 F2 champion, has yet to score a point at the sport's bottom-ranked team but is a rising talent contracted long-term to engine providers Mercedes, who could take him back at the end of next season.

Perez is being replaced at Racing Point, who will become Aston Martin next year, by four-time world champion Sebastian Vettel.

The Mexican would bring strong sponsor backing as his country's only F1 driver, and is well-rated as a scorer of points and podiums.

The 30-year-old could be a better long-term prospect than a young driver being groomed for another team's eventual benefit.

“I've got a contract for next year,” said Russell, an argument also used by Perez who had wanted to stay at Racing Point but discovered the deal was less than binding.

“I've obviously seen speculation. The facts are there are a lot of great drivers on the grid looking for race seats, some of which have a lot of backing behind them.”

Latifi already makes a financial contribution to the team through sponsorship from companies linked to his wealthy father Michael.

Valtteri Bottas set the pace for Mercedes in the first Portuguese Grand Prix practice in 24 years on Friday, with six-time Formula One world champion ...
Motoring
9 months ago

George Russell said on Thursday he was confident he would be racing for Williams in Formula One next year despite media speculation linking Mexican ...
Motoring
9 months ago

Kevin Magnussen said on Thursday he would love to race in America when he leaves the Haas Formula One team at the end of the season, if he could not ...
Motoring
9 months ago