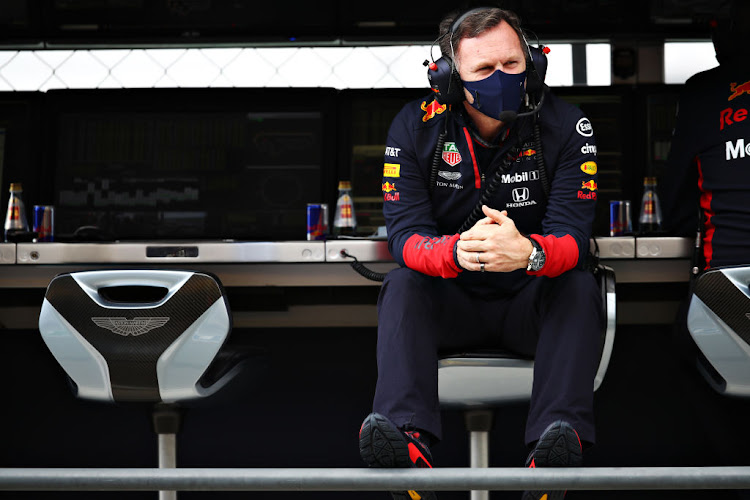 Red Bull Racing Team Principal Christian Horner looks on from the pitwall during practice ahead of the F1 Grand Prix of Portugal at Autodromo Internacional do Algarve on October 23, 2020 in Portimao, Portugal.
Image: Mark Thompson/Getty Images

Red Bull will look outside their current pool of contracted drivers if they decide to replace Alexander Albon as Max Verstappen's team mate for 2021, according to principal Christian Horner.

Speaking at the Portuguese Grand Prix, Horner made clear the Thai racer was running out of time to prove he deserved to remain.

“We want Alex to claim that seat and basically justify that there is no need to look at any other alternative than Alex,” he said in a pooled interview. “I think everybody in the team wants to see him do that.

“He’s had a couple of difficult weekends so he needs to bounce back here, I think, and particularly Imola with a strong weekend from start to finish.”

The Emilia Romagna Grand Prix at the Italian circuit is on November 1, the weekend after Portugal.

Verstappen is on a long-term contract at Red Bull and a proven race winner, while Albon has struggled to match the Dutchman's performance.

He has scored 64 points from 11 races compared with third-placed Verstappen's 147.

“We need two cars closer together in order to fight the Mercedes,” said Horner.

AlphaTauri's French driver Pierre Gasly, who was at Red Bull but returned to the sister team last year in a swap with Albon, won last month's Italian Grand Prix but Horner ruled out another switch.

“I think AlphaTauri are pretty settled with their drivers,” he said of a team who also have Russian Daniil Kvyat in their line-up with Japanese F2 driver Yuki Tsunoda a possible replacement for 2021.

“Our preference is very much Alex, but if we had to look at a different solution, then obviously we would have to look outside of the Red Bull pool of drivers simply because there is not one available that we would look to put in.

“There’s some quality drivers, obviously, on the market, that could be unemployed for next year.”

The list includes Germany's Nico Hulkenberg, already used as a stand-in by Racing Point this year, and Mexican Sergio Perez who is being replaced at Racing Point by four-time world champion Sebastian Vettel.

Max Verstappen and Lance Stroll collided in an eventful second practice for the first Portuguese Grand Prix in 24 years on Friday while Valtteri ...
Motoring
9 months ago

Williams refused to rule out a move for Sergio Perez on Friday as speculation mounted that the Mexican could replace George Russell at the tail-end ...
Motoring
9 months ago

Valtteri Bottas set the pace for Mercedes in the first Portuguese Grand Prix practice in 24 years on Friday, with six-time Formula One world champion ...
Motoring
9 months ago

Red Bull Racing Team Principal Christian Horner looks on from the pitwall during practice ahead of the F1 Grand Prix of Portugal at Autodromo Internacional do Algarve on October 23, 2020 in Portimao, Portugal.
Image: Mark Thompson/Getty Images