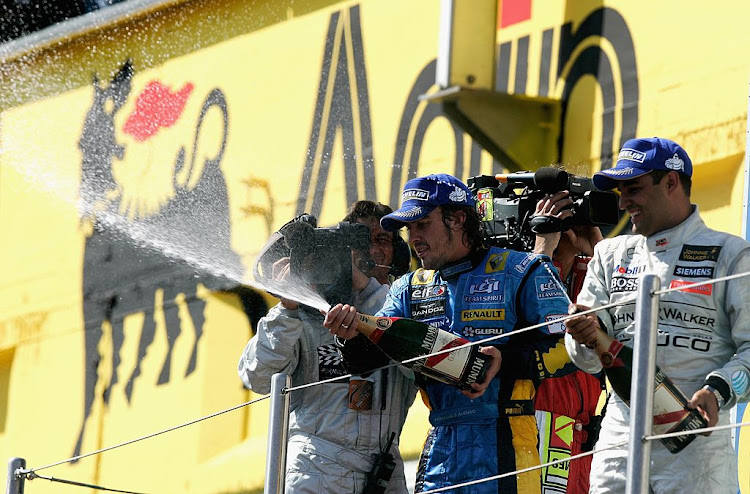 Fernando Alonso of Spain and Renault and Juan Pablo Montoya of Columbia and McLaren-Mercedes celebrate finishing second and third during the San Marino F1 Grand Prix at the San Marino Circuit on April 23, 2006, in Imola, Italy. This was the last time this circuit hosted a F1 race.
Image: Paul Gilham/Getty Images

This weekend's Emilia Romagna Formula One Grand Prix at Imola will be held behind closed doors due to the Covid-19 pandemic, organisers said on Wednesday.

Promoters had previously been given permission for more than 13,000 spectators a day but issued a statement on the circuit website.

"The government has banned our fans and we are very disappointed for that," motorsport.com quoted Imola boss Uberto Selvatico Estense as saying.

Italy announced new measures on Sunday to try to halt a rapid resurgence in the coronavirus.

The race weekend, without Friday practice and condensed into two days from the usual three, will be the third race in Italy this season and 13th round of the championship.

Mercedes can secure a seventh successive constructors' title on Sunday.

Imola last hosted a Formula One race in 2006, when it was designated the San Marino Grand Prix, but has been restored to a patched-up calendar after other races were cancelled due to the new coronavirus.

Saudi Arabia is set to host a Formula One grand prix for the first time next year with a street race in Jeddah featuring on a record 23-round draft ...
Motoring
5 months ago

Italian Grand Prix winner Pierre Gasly will continue to race for AlphaTauri in 2021, the Red Bull-owned Formula One team confirmed on Wednesday.
Motoring
5 months ago

'I take my hat off to Hamilton', says old F1 foe Rosberg

Nico Rosberg hailed Lewis Hamilton's record 92nd Formula One win and sporting longevity as a great achievement on Tuesday but said the way the Briton ...
Motoring
5 months ago
Next Article