Raikkonen and Giovinazzi are staying at Alfa Romeo for 2021 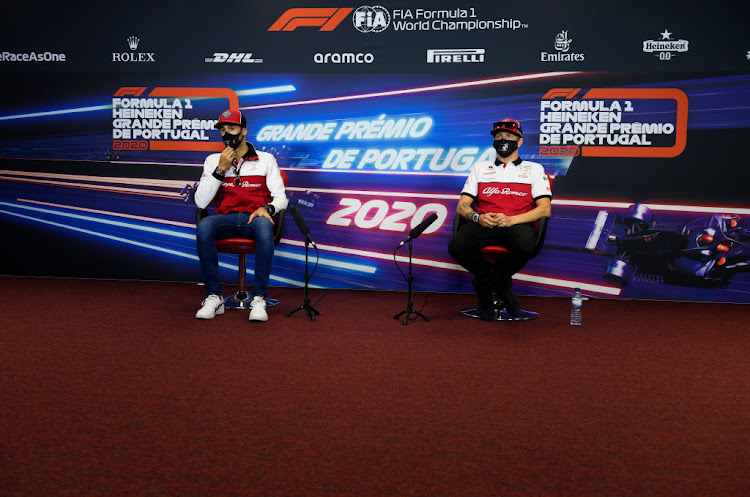 Formula One's most experienced driver Kimi Raikkonen and Italian Antonio Giovinazzi will race on for Alfa Romeo next season, the Swiss-based team said on Friday.

Raikkonen, the 2007 world champion who is now 41, holds the records for most races entered (327) and started (324) by any driver in the history of the sport and is the oldest on the starting grid.

The Finn showed in Portugal last weekend that he still has the fighting spirit, overtaking 10 cars on the opening lap.

"Alfa Romeo is more than a team to me, it is like a second family," said Raikkonen, who started with the team when they raced as Sauber and won his world championship with Ferrari.

"So many of the faces who were around me when I made my Formula One debut in 2001 are still here, and the unique atmosphere of this team is what gives me that extra motivation to keep going in what will be my 19th season in the sport.

"I wouldn’t be here if I didn’t believe in the team’s project and in what we feel we can achieve together. This is a team that values hard work over words, and this fits well with my style."

Giovinazzi, 26, will enter his third season in Formula One.

The announcement by the Ferrari-powered team ahead of this weekend's Emilia Romagna Grand Prix at Italy's Imola circuit leaves Haas as the clear destination for Ferrari Academy driver Mick Schumacher.

The son of Ferrari great Michael is currently leading the Formula Two championship and Ferrari-powered Haas have two seats available.

Alfa Romeo announced on Thursday the continuation into 2021 of the carmaker's naming rights deal with Sauber.

Back on the F1 calendar after a 14-year absence, the Autodromo Enzo e Dino Ferrari will host the third Italian race of the season, after Monza and ...
Motoring
7 months ago

Lewis Hamilton is closing in on a seventh Formula One championship but his dominant Mercedes team should get there first at Imola on Sunday.
Sport
7 months ago

Alfa Romeo will continue a naming rights deal with Swiss-based Sauber for the 2021 Formula One season, they said in a statement on Thursday
Motoring
7 months ago