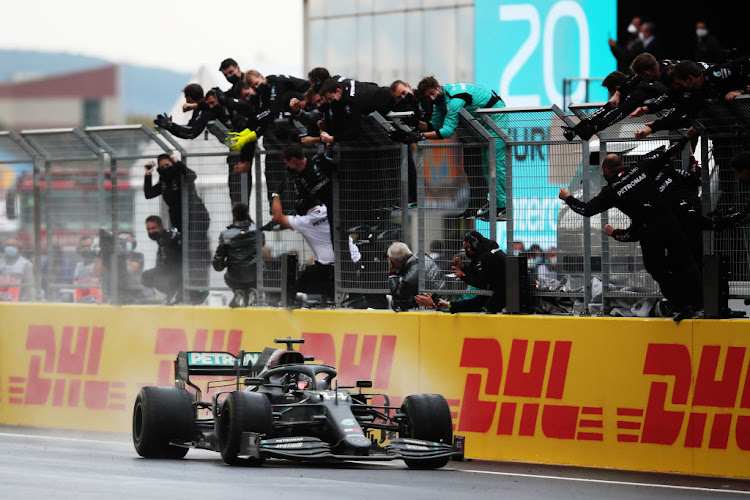 Britain's Lewis Hamilton choked back the tears as he won a record-equalling seventh Formula One world championship on Sunday and became the most successful driver in the sport's history.

The Mercedes ace put on a masterclass in wet and slippery conditions to take a record-stretching 94th career win at a rollercoaster of a Turkish Grand Prix and secure the title with three races to spare.

Only Ferrari great Michael Schumacher has seven titles to his name, a number once thought unlikely ever to be matched, but most of the German's records have passed to Hamilton.

So complete was Hamilton's domination that he lapped sole rival and team mate Valtteri Bottas with 12 laps to go on a nightmare afternoon for the spinning Finn who finished 14th.

Hamilton already had more race wins, pole positions and podium finishes than anyone in the history of the sport but, despite starting a season-low sixth, the 35-year-old was determined to add to the tally.

"Thank you so much guys...that's for all the kids out there who dream the impossible. You can do it too man, I believe in you guys," he whooped over the radio after taking the chequered flag.

The Briton finished a massive 31.6 seconds clear of Racing Point's second-placed Mexican Sergio Perez in a race run behind closed doors due to the Covid-19 pandemic.

"Seven is just unimaginable but when you work with such a great group of people and you really trust each other, there is just no end to what can do together," said Hamilton, who has yet to sign a new deal for 2021.

Hamilton was congratulated after parking up by Perez, who still has no seat for 2021, and Ferrari's Sebastian Vettel who completed the podium in a race full of spins and changes of lead.

"I told him that it was very special for us because we can witness history being made today," said Vettel, a four-times world champion with Red Bull and on the podium for the first time this year.

"There is no doubt Lewis is the greatest in terms of what he has achieved."

Bottas, who said over the radio four laps from the end that he wished the race was already finished, also went across to extend his hand.

Mercedes had already won the constructors' championship for a seventh year in a row, an unprecedented feat.

While Perez started third and eked out his tyres, Canadian team mate Lance Stroll saw his dreams of a first win disappear after leading from his first pole position.

He finished ninth, the slide down the order starting when he pitted on lap 37.

Red Bull's Alexander Albon was seventh with Lando Norris eighth for McLaren and taking a bonus point for the fastest lap. Australian Daniel Ricciardo was 10th for Renault.

Hamilton said there was a point where he thought the race was slipping away from him, and the leaden skies and constant threat of rain added to the sense of uncertainty, but he kept believing.

When the team suggested he pit for fresh tyres towards the end, given the safety of his lead and the amount of laps done on the worn intermediates, he over-ruled them.

"I lost a world championship in the pit-lane, I learned my lesson from 2007, that's for sure. I felt like I really had it under control and I was going to deal with the rain if it dropped," said the former McLaren driver.

Formula One champion Lewis Hamilton slammed a recent resurfacing of the Turkish Grand Prix circuit on Friday as a waste of money that had turned a ...
Motoring
4 months ago

Lewis Hamilton said on Thursday his campaigning for equal rights and diversity made him more proud than an imminent seventh Formula One world ...
Motoring
4 months ago
Next Article