Grosjean to spend another night in hospital, keen for Abu Dhabi return 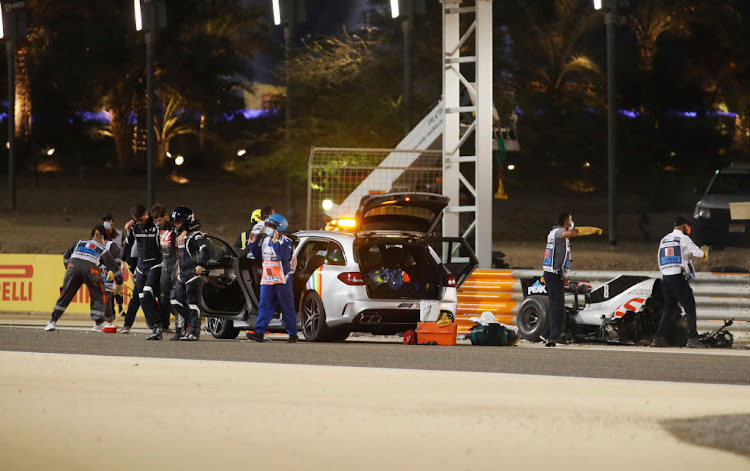 Romain Grosjean will spend another night in hospital recuperating from his fiery Bahrain Grand Prix crash but the Frenchman is keen to race in the Formula One finale in Abu Dhabi, his Haas team boss Guenther Steiner said.

The 34-year-old, who limped away from the horrific crash that split his car in two with burns to his hands and not a broken bone in his body, was set to be discharged from a nearby hospital on Tuesday.

“This guy he's got with him actually told me the doctors are very happy, and the healing process is as they had seen it coming,” said Steiner. “So there is no setback. It's just maybe better to stay a night longer to make the healing quicker.”

Grosjean, who is out of a drive and set to leave Formula One next season, will be replaced by Haas's Brazilian reserve driver Pietro Fittipaldi for the second of Bahrain's two races this weekend.

He has put up several posts from hospital on his social media including one on Tuesday showing him, his hands and left foot swaddled in bandages, doing squats.

Steiner said he is working to be back to full fitness in time for the December 13 season-ending race in Abu Dhabi, which is likely to be his Formula One swansong.

“That is his aim now. He just tries to get better to be in the car in Abu Dhabi. I think that shows that he wants to keep on doing it, you know,” Steiner said.

Haas on Tuesday announced Russian Nikita Mazepin as one of its two drivers for the 2021 season.

Mick Schumacher, son of seven-time world champion Michael, is favourite to land the second seat at the American team with Grosjean's teammate Kevin Magnussen also leaving the team at the end of the season.

Nikita Mazepin to race for Haas F1 next season

Russian driver Nikita Mazepin will race for Haas in 2021 after agreeing a multi-year deal, the US-based Formula One team announced on Tuesday
Motoring
4 months ago

Formula One champion Lewis Hamilton has tested positive for Covid-19 and will miss the upcoming Sakhir Grand Prix in Bahrain, the sport's governing ...
Motoring
4 months ago

Audi will withdraw from the all-electric Formula E series as a works team at the end of next year to focus on the Dakar Rally and endurance racing ...
Motoring
4 months ago
Next Article