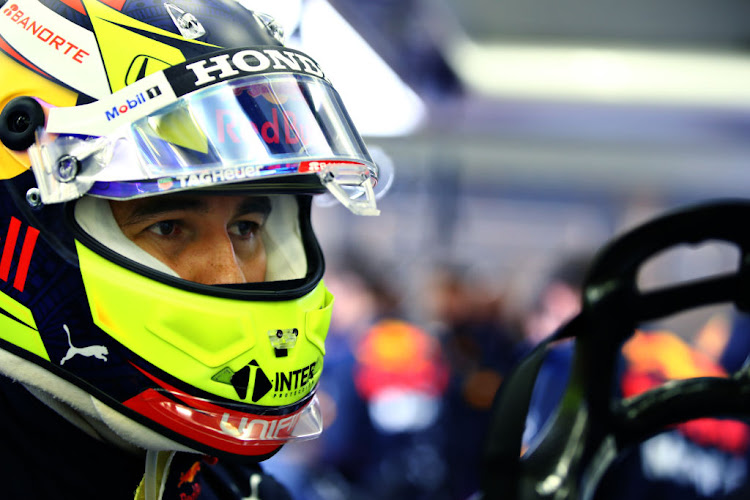 Sergio Perez of Mexico and Red Bull Racing prepares to drive in the garage during Day Two of F1 Testing at Bahrain International Circuit on March 13 2021 in Bahrain.
Image: Mark Thompson/Getty Images

Sergio Perez has the Formula One chance of a lifetime with Red Bull this season and the Mexican intends to seize it with both hands.

Only months ago it looked like the 31-year-old had run out of options after missing two races due to Covid-19 and being left without a seat when Racing Point (now Aston Martin) signed four times world champion Sebastian Vettel for 2021.

Perez talked of taking a year out but in December he went from last to first at Bahrain's Sakhir circuit, a winner after 190 starts and Mexico's first in 50 years, and everything changed.

Red Bull offered the 10-year F1 veteran a seat as Max Verstappen's team mate, and suddenly the road ahead opened up.

The dream of racing for a top team, almost extinguished in 2013 after a difficult season at an ailing McLaren as now seven-times world champion Lewis Hamilton's replacement, was alive again.

“I feel very, very hungry. Hungry for success. And I know that I have an opportunity that comes once in your life and I just want to make the most out of it,” Perez told Formula One's “Beyond the Grid” podcast at last weekend's preseason testing in Bahrain.

“There are a couple of times that I think (is this real?)," he added.

“When I see my name on that car, when I put the suit on, when I work here, it's just something that I think 'Wow ... I'm a Red Bull racing driver'. It's just a massive opportunity in my career that comes at the best possible time.”

If sharing a garage with Verstappen has proved something of a poisoned chalice for the last three incumbents, the experienced Mexican could be a tougher nut.

How they get on together will be one of the storylines of the season.

Perez finished fourth overall last year, with Verstappen third and best of the rest behind the Mercedes pairing of Hamilton and Valtteri Bottas.

“Since I knew I was coming to Red Bull I knew that I am going to be facing a big challenge which is Max. He’s a very complete driver,” said the Mexican.

“The way I see it is that I’ve got absolutely nothing to lose in my career. I’ve been lucky enough to have a fantastic career, so whatever comes next is great.”

Mercedes have won the past seven drivers' and constructors' title but Red Bull are determined to mount more of a challenge, with Perez playing a big part in that.

They looked to have the edge on performance in testing, with Mercedes recognising their rivals were the “class act”.

“The car feels good, just keeps getting better and better every time I jump in,” said Perez, who was rejected by Red Bull as a youngster but went on to be part of the Ferrari driver academy.

The deal may turn out to be only for one year, but Perez saw only positives.

“It’s an opportunity that will definitely open many doors,” he said. “We’ll see what happens afterwards.”

Red Bull are ahead on performance, says Mercedes strategy head

Red Bull were the top team in testing and Formula One looks set for a close title battle, Mercedes motorsport strategy director James Vowles said on ...
Motoring
3 weeks ago

Sebastian Vettel will want to show he still has the speed and spirit of a four-times world champion as he makes a fresh start with Aston Martin this ...
Motoring
3 weeks ago