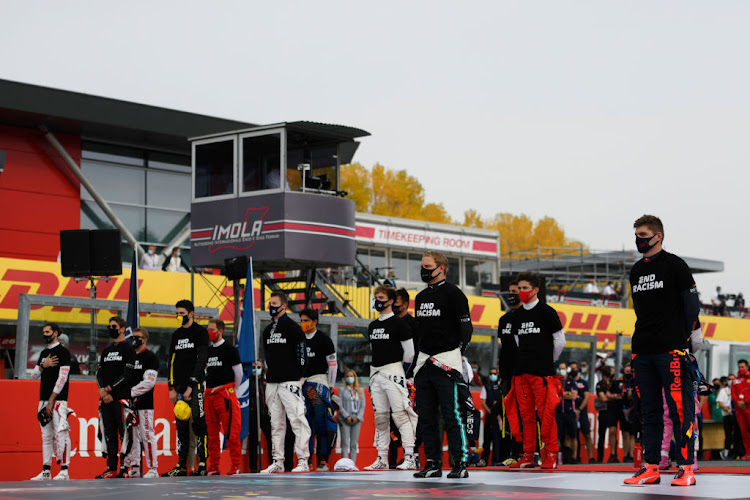 Formula One drivers will gather again in a moment of unity on the starting grid pre-race this season but in support of wider social and environmental issues rather than a sole focus on anti-racism.

The sport this week announced the international advocacy organisation Global Citizen as a charity partner of Formula One’s WeRaceAsOne platform which was launched last year with equality and diversity at its core.

“The whole of Formula One is united in its support for WeRaceAsOne and the drivers will all show their own support for the initiative ahead of the grand prix,” a Formula One spokesperson said on Tuesday.

“"The drivers will be free to show their commitment in their own way before the race and there will be no requirement for them to make a specific gesture.

“The important thing is all of them being together in full support of our initiatives on sustainability, diversity and inclusion and community.”

What is billed as a record 23-round season, pandemic permitting, starts in Bahrain on Sunday.

Seven times world champion Lewis Hamilton, the sport’s only black driver, took a knee before races last year while wearing a Black Lives Matter mask or T-shirt but some other drivers remained standing.

They all wore anti-racism T-shirts and also featured in an “End Racism” video broadcast before the race.

“I don’t think it’s the most important thing that everyone takes the knee," Hamilton had said earlier in the year.

“I think it’s more the action we take in the background.

“We’ll see how we can collectively work together to make sure we’re leading more in this sport and not necessarily having to be taking a knee.”

Hamilton has set up a commission to help increase the representation of black people in British motorsport and he and Mercedes have announced a foundation dedicated to diversity and inclusion in the sport.

Williams have appointed Francois-Xavier Demaison as the Formula One team's new technical director, with the Frenchman joining from Volkswagen on an ...
Motoring
1 month ago

McLaren have signed a long-term agreement with 13-year-old American karter Ugo Ugochukwu to support him through the junior categories of motorsport, ...
Motoring
1 month ago
Next Article