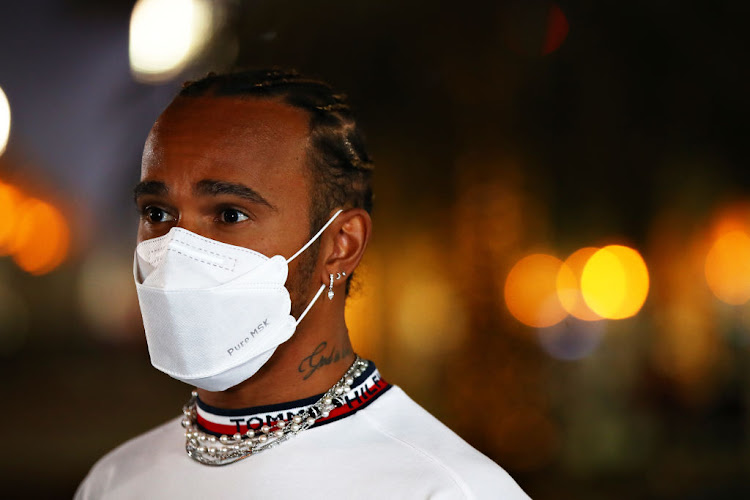 Lewis Hamilton ahead of the F1 Grand Prix of Bahrain at Bahrain International Circuit on Thursday.
Image: Mark Thompson/Getty Images

Formula One world champion Lewis Hamilton said he had spoken to Bahrain officials about the country's human rights situation after promising last year he would not let any abuses go unnoticed.

The Mercedes driver, who will be chasing a record eighth world title in a season that starts in the Gulf kingdom on Sunday, detailed on Thursday efforts he had made to educate himself about what was going on.

The Briton said in December he had been moved by a letter from the son of a man facing the death penalty. Hamilton had, however, been unable to meet officials at the time after testing positive for Covid-19 and going into self-isolation.

“It weighed quite heavily on me,” he said of the letter. “It was the first time I had received letters like that along my travels. So I've taken time in the past few months to try to  educate myself because coming here all these years I wasn't aware of all of the details, the human rights issues.

Hamilton said his moves were private.

“I don't want to say too much, that may jeopardise any progress ... but I'm definitely committed to helping in any way I can,” he added.

Some 61 British parliamentarians and campaigners urged Formula One on Wednesday to commission an independent inquiry into alleged abuses linked to the Bahrain race. Rights campaigners accuse the government of using positive publicity from the country's most high-profile event to “sportswash” the situation.

Formula One CEO Stefano Domenicali said in a reply, seen by Reuters, that the sport took human rights very seriously and had made its position clear to all partners.

He added, however, that Formula One was “not a cross border investigatory organisation” and was not able to undertake the action requested.

Hamilton said it was not in his power to choose where to race but it was right to speak out.

“I don't think we should be going to these countries and just ignoring what is happening in those places and arriving, having a great time and then leave,” he said.

Formula One still has some issues to resolve before a new sprint qualifying format can be accepted for selected grand prix weekends this season, Haas ...
Motoring
1 year ago

Sergio Perez's future at Red Bull beyond this season rests in his own hands, team boss Christian Horner said ahead of Sunday's Formula One season ...
Motoring
1 year ago

Red Bull and software giant Oracle announced a Formula One partnership on Thursday that they said also reflected the sport's growing appeal to US ...
Motoring
1 year ago