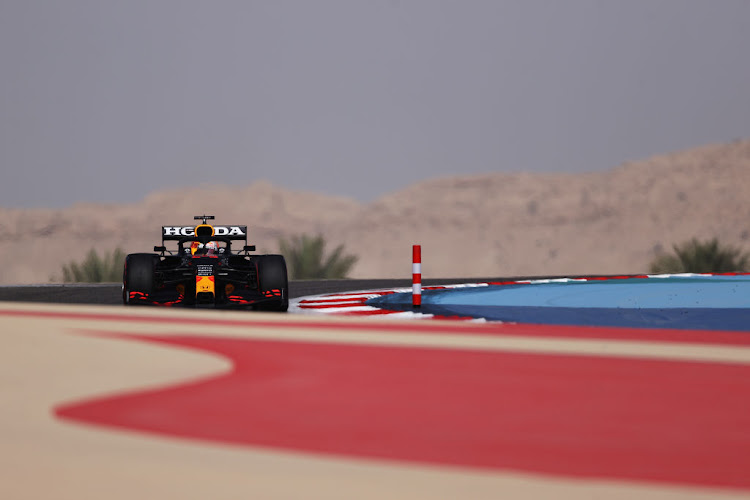 Max Verstappen of the Netherlands driving the (33) Red Bull Racing RB16B Honda drives on track during practice ahead of the F1 Grand Prix of Bahrain at Bahrain International Circuit on March 26, 2021 in Bahrain, Bahrain.
Image: Lars Baron/Getty Images

Max Verstappen set the pace in the first practice session of the Formula One season in Bahrain on Friday as his Red Bull team immediately lived up to expectations that have soared since testing.

The Dutch youngster, who was fastest overall in preseason testing at the same Sakhir circuit, set a best time of one minute 31.394 seconds.

Valtteri Bottas, who has won the opening race of the championship for the past two years, was 0.298 slower for champions Mercedes.

McLaren's Lando Norris was third fastest, with a car now powered by a Mercedes engine after the switch from Renault, with seven-time world champion and fellow Briton Lewis Hamilton fourth for Mercedes, 0.527 off Verstappen.

Norris had gone top with 27 minutes to go before Bottas went faster and then Verstappen, who reeled off a string of fastest sectors in the closing minutes.

Friday's two practice sessions are now each one hour long, rather than the previous 90 minutes, in a change for 2021.

Mick Schumacher has been getting some tips from Kimi Räikkönen, the man who took over from father Michael at Ferrari, as he prepares for his Formula ...
Motoring
3 months ago

Sebastian Vettel revealed on Thursday he had named his new Aston Martin AMR21 Formula One car Honey Ryder after the character played by Ursula ...
Motoring
3 months ago

Formula One world champion Lewis Hamilton said he had spoken to Bahrain officials about the country's human rights situation after promising last ...
Motoring
4 months ago