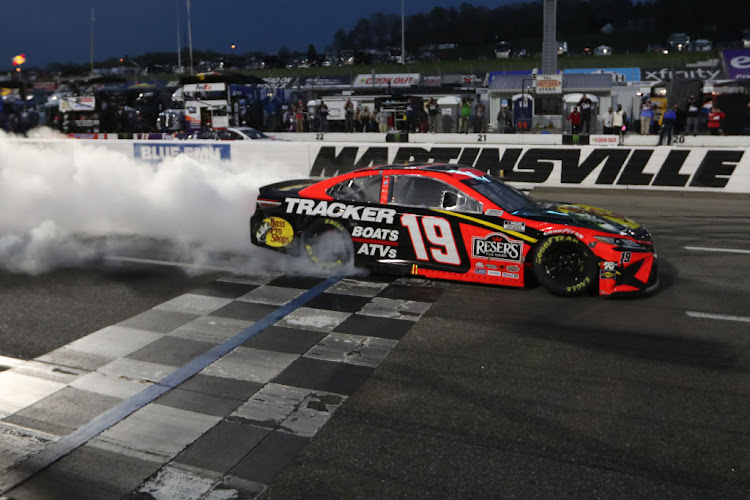 Truex passed Joe Gibbs Racing teammate Denny Hamlin with 16 laps to go, watched in his rear-view mirror as Hamlin and Chase Elliott battled for second place and went on to beat Elliott to the finish line by 1.9 seconds.

It was Truex's third win at Martinsville, all coming in the last four races there.

“I can't believe we won here again,” Truex said. “It was a lot of fun racing at the end there racing with Denny. We raced clean and we came out on top. We played nice and coach (team owner Joe Gibbs) will be happy and it will be a cordial meeting tomorrow.”

Truex got his first victory of 2021 three races ago at Phoenix Raceway.

Elliott has got off to a slow start this season. His runner-up finish was by far his best of 2021.

“That run (at the end, where he over took Hamlin for second) was kind of the right distance for me there at the end to maximise it,” Elliott said. “Anything longer than that I was probably going to fade kind of like I did all day.

“I've had a very eventful year I feel like so it's nice to have a solid day. I got some stage points and got a good finish.”

Hamlin, who led a race-best 276 laps, finished third. He was attempting to join Hall of Famers Cale Yarborough, Dale Earnhardt and Fred Lorenzen as a six-time winner at Martinsville.

“Fortunately for us, we had a great day, stayed up front all day and had ourselves a shot at it. But wasn't quite good enough,” Hamlin said.

“We had a really fast car for 20 laps or so and then it would just kind of go away.”

The most notable crash occurred with 113 laps to go as it involved contenders Brad Keselowski, Kurt Busch and Kyle Busch — all of whom are three-time winners at the track. Twelve other drivers were also involved, including Alex Bowman, who ran in the top five for much of the day.

“There was a crash in front of me and I stopped and the guys behind me didn't stop,” Bowman said. “I thought we had a car capable of winning.”

The wreck brought out a red flag of almost 25 minutes.

“Just kind of one of those compounding, frustrating short track days,” Keselowski said.

The 500-lapper was originally scheduled to be the first true night race at the historic .526-mile, paper clip-shaped track on Saturday. Wet weather messed with that schedule.

The race's start was delayed for almost an hour and a half by wet weather on Saturday night. Once it did start, it was red-flagged for good when rain picked up on Lap 42. Workers lost the track and officials announced the race would resume on Sunday.

Hamlin had the lead when the race was postponed.

Nico Hulkenberg will be Aston Martin's official Formula One reserve and development driver this season, the team said on Thursday
Motoring
1 year ago

All three WRC manufacturers sign up for new hybrid era

Toyota, Hyundai and M-Sport Ford have committed to the new hybrid era of the world rally championship starting next year, the production car-based ...
Motoring
1 year ago