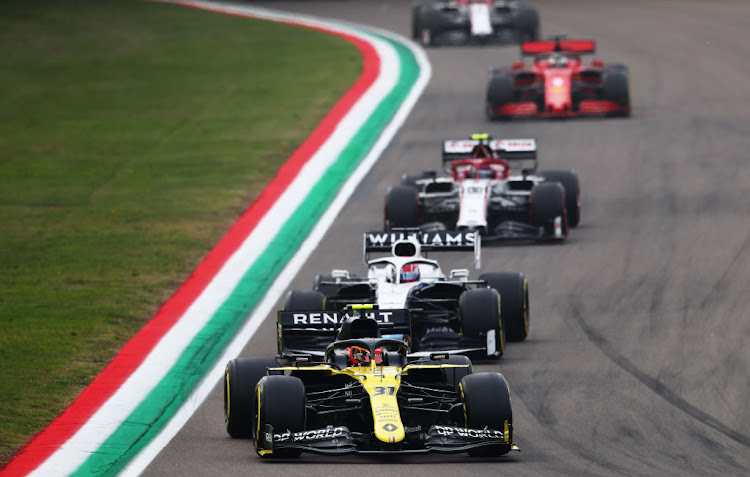 Esteban Ocon of France in the Renault Sport Formula One Team RS20 leads a line of cars during the F1 Grand Prix of Emilia Romagna at Autodromo Enzo e Dino Ferrari on November 1 2020 in Imola, Italy.
Image: Joe Portlock/Getty Images

Formula One will shift practice and qualifying for this weekend's second race of the season at Imola in Italy to avoid having cars on the track during the funeral of Britain's Prince Philip.

The sport and governing FIA said on Tuesday that qualifying for the Emilia-Romagna Grand Prix will move forward to noon-1pm GMT (2pm-3pm local) as a mark of respect for the royal who died last Friday aged 99.

Final practice will be brought forward to 9am-10am GMT to comply with regulations that state there must be a two-hour gap between the sessions.

Friday times have also been changed in accordance with rules requiring final practice to start no less than 19 hours after the end of second practice.

The funeral at Windsor Castle starts with a national minute's silence at 3pm local time, or 2pm GMT.

Formula One will hold a minute's silence ahead of qualifying “as an opportunity for people to show their respects”.

Seven of the 10 Formula One teams, as well as the sport itself, are British-based, including champions Mercedes, and Prince Philip was president-in-chief of the British Racing Drivers' Club (BRDC) for 42 years.

Other sporting events in soccer, rugby and horse racing in Britain have been rescheduled to avoid clashing with the funeral.

Car makers and governments have called time on the internal combustion engine as they switch to electric, but Formula One sees plenty of life in it ...
Motoring
1 year ago

Nico Hulkenberg will be Aston Martin's official Formula One reserve and development driver this season, the team said on Thursday
Motoring
1 year ago

Formula One champions Mercedes say their car is not stronger than Red Bull in any one area despite Lewis Hamilton winning Sunday's season-opening ...
Motoring
1 year ago