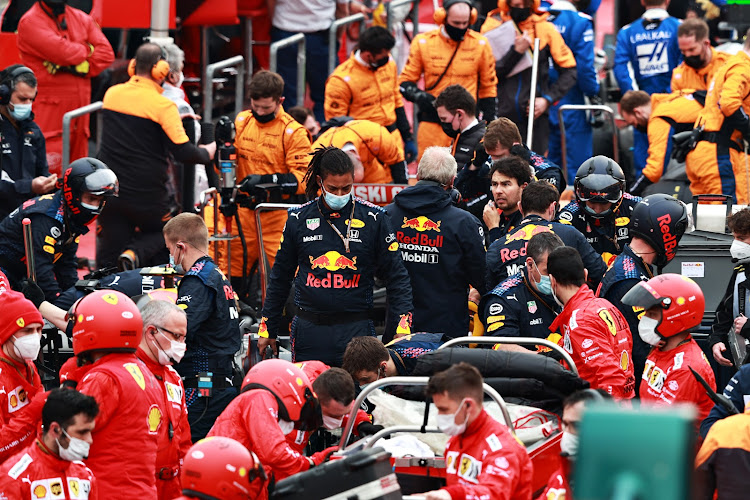 Sergio Perez of Mexico and Red Bull Racing looks on in the Pitlane during the red flag delay period during the F1 Grand Prix of Emilia Romagna at Autodromo Enzo e Dino Ferrari on April 18, 2021 in Imola, Italy.
Image: Mark Thompson/Getty Images

The Emilia Romagna Grand Prix at Imola was halted after 33 of 63 laps on Sunday after a collision between the Mercedes of Valtteri Bottas and Williams of George Russell.

Both drivers climbed out of their wrecked cars but the amount of debris scattered across the track in the high-speed accident triggered the safety car and then brought out red flags.

Russell, who has a long-term Mercedes contract, had been trying to overtake the Finn for ninth place. Replays of the incident were inconclusive.

Red Bull's Max Verstappen was leading the race with seven- time world champion Lewis Hamilton, who had started from pole position, down in ninth after making a rare error on the damp track and sliding off across the gravel.

The Briton, who had been second before the incident, had to pit for a new front wing.

The cars returned to the pits to await a restart.

Yamaha's Fabio Quartararo claimed a second consecutive MotoGP victory after leading almost from start to finish at the Portuguese Grand Prix on ...
Motoring
4 weeks ago

Miami will host Formula One from 2022 as part of a "milestone" 10-year-deal announced by the sport and local organisers on Sunday that gives the ...
Motoring
4 weeks ago