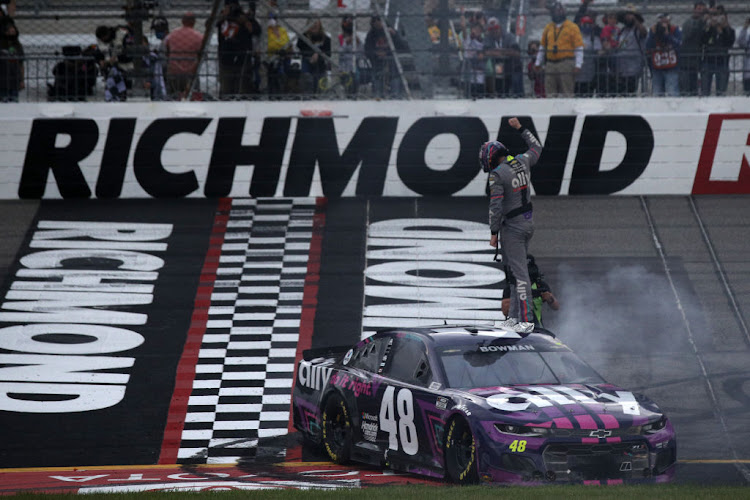 Alex Bowman took the lead from Denny Hamlin with 10 laps to go, put a bit of space between them and went on to win the Toyota Owners 400 NASCAR Cup Series race at Richmond Raceway on Sunday in Virginia.

The victory was the first of the season for the Hendrick Motorsports driver, his first at Richmond and the third of his Cup career.

It also was Bowman's first at a short track in Cup action and gave him his second top-five finish at a shorty.

"We had a great race car, it's as simple as that," Bowman said.

"Crew chief Greg Ives and all the guys, they have to deal with me at short tracks and I drive these places really wrong. We kind of – instead of trying to make me figure it out – we went to work on getting the race car where I needed it to be. Greg has done such an amazing job at making that happen."

Bowman overcame a pit-road penalty earlier in the race to get the win.

The victory gave Bowman his first top-five finish at Richmond and came in his 10th start at the Virginia track.

His margin of victory over Joe Gibbs Racing's Hamlin was .381 seconds.

His big move came just after a restart with 12 laps to go. On that restart he jumped past leader Hamlin and second-place Joey Logano – much to his own surprise.

"To be honest with you, we were terrible on short runs," said Bowman, who this year took over the No 49 Chevrolet that Jimmie Johnson had driven to seven Cup championships.

"We restarted third and I'm like, ‘Man, if we get out of here with a solid top five, we'll be good'.

"We've overcome a lot today. I don't know if Greg pumped the pressures way up or what he did, but that's more grip than I've ever had in a race car at Richmond, and it worked out really well. Getting to race a guy like Denny (Hamlin) is really cool. I feel like we raced each other really clean, so I'm appreciative of that. It means a lot."

"We didn't take off there quite as good there at the end," said Hamlin, who started the race as the points leader despite having not won this year.

"We'll keep digging. We're dominating. Just got to finish it."

"He stole one, that's for sure," Logano said.

"Congratulations to them. They beat us. Frustrating. We were so close."

Martin Truex Jnr, the series only two-time winner this season, appeared to have enough car to become a three-time winner.

But JGR's Truex, who had started the race having won five of the last 11 short track races, including last weekend's event at Martinsville, was penalised for speeding into pit row in the third stage while running second. He fought his way back to the front and finished fifth after leading 107 laps.

Several drivers who started the day in the top 10 in points had terrible days. Those included Kyle Larson, who has a victory in 2021 and was fourth in points before the race. He finished 18th – two laps of the pace.

Kevin Harvick, who won a series best nine times a year ago, appeared headed to a good finish on Sunday but he blew a tyre with 20 laps to go and crashed hard into the wall.

Speaking of crashes, next up on the Cup schedule is a 500-miler at NASCAR's biggest track, the 2.66-mile, high-banked Talladega Superspeedway oval.

Yamaha's Fabio Quartararo claimed a second consecutive MotoGP victory after leading almost from start to finish at the Portuguese Grand Prix on ...
Motoring
4 weeks ago
Next Article