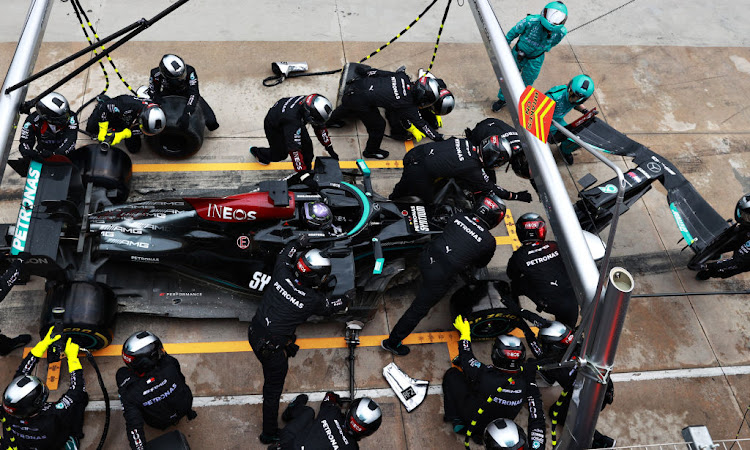 Formula One champions Mercedes have recognised they need to speed up their pit stops as they wage a tight battle with Red Bull, the fastest team in the pitlane.

Though they made the fastest stop of last Sunday's race at Imola, changing the wheels on Valtteri Bottas's car in 2.24 seconds in a wet pitlane, they have also lost time with costly errors.

Sunday was the first time since 2018, 42 races ago, that Mercedes had topped the DHL fastest pit stop list.

“It is fair to say that we're not the best,” trackside engineering director Andrew Shovlin said on Wednesday in a weekend race debrief on the Mercedes website www.mercedesamgf1.com.

“We are losing time in the pit stops and it is an area that we have been focusing on for a while now.”

An issue with one of the wheel guns slowed seven-time world champion Lewis Hamilton, now only a point clear of Red Bull's race winner Max Verstappen after two rounds, at Imola.

Verstappen had stopped first, at a circuit with a very long pitlane, with Hamilton staying out for another lap and taking over the lead.

A four-second stop and having to wait for Antonio Giovinazzi's Alfa Romeo to go past before the Mercedes could be released, undid Hamilton's efforts and kept the Dutchman in front.

“For the next stop we actually changed to a different gun and that seemed to resolve that issue,” said Shovlin.

“There were some specific instances that affected us in the race in Imola and we will look to work on those but longer term we are still looking at what we can do with the crew, with the equipment trying to find a bit more time in the stops.”

Red Bull are famously fast in their pit stops, holding the record of 1.82 seconds set in Brazil in 2019. Their best effort at Imola was 2.27 for Verstappen's car.

In 2020, they produced the fastest pit stop in 15 of 17 races with nine of them under two seconds.

A nearly 11 second pit stop in the opening race in Bahrain in March wrecked Bottas's race, with the Mercedes driver a distant third, and was attributed to human error with a mechanic withdrawing the wheelgun too early.

At the same Sakhir track in December, an agonisingly long stop ruined George Russell's chances of a victory as a stand-in for Hamilton and saw Bottas wait 27 seconds and leave the pits with the same tyres he had come in on.

The team blamed a radio problem for that one.

Mercedes made a dig at themselves days later on social media: “Someone asked us to post the pit stops from Sunday on our Instagram Reels,” the team said on Twitter. “But Reels can only be 30s (seconds). Sorry.”

An Italian who threw part of his go-kart at a rival during a world championship final, repeatedly crossed the track during the race and came to blows ...
Motoring
3 months ago

Formula One relishes prospect of 'titanic battle' ahead

George Russell apologised publicly to Formula One rival Valtteri Bottas on Monday for his behaviour after the pair collided at the Emilia Romagna ...
Motoring
3 months ago