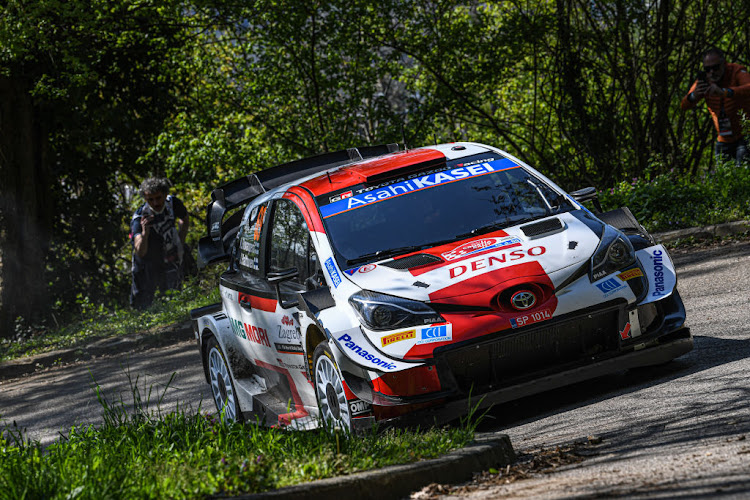 Kalle Rovanpera and Jonne Halttunen crashed out of the Rally of Croatia on Friday.
Image: Massimo Bettiol/Getty Images

World championship leader Kalle Rovanpera crashed out of the Rally of Croatia before he could complete the opening stage on Friday.

The Toyota driver went off the road after 5.4km of the 6.9km first stage from Rude to Plesivica, the shortest of the event making its debut on the championship calendar.

The Zagreb-based asphalt rally is the third round of the championship with 20-year-old Rovanpera the youngest ever leader.

Finn and co-driver Jonne Halttunen walked away unhurt from the accident, with in-car video footage showing the Toyota plunging off the road and ending up among trees with a smashed windscreen.

Rovanpera may be able to rejoin the event on Saturday, with the possibility of at least scoring points in the final power stage on Sunday.

"Really sorry for the team. This was my mistake and I will learn from this. Mechanics will check the car once we get it back to service to see if the car is fixable for tomorrow," the driver said on Twitter.

"Super annoyed. The whole opening stage was super slippery and we were struggling with a lot of understeer.

"I still tried to push, but on this fast right-hander grip just completely disappeared and we understeered off the road into the trees."

Neuville was leading in Croatia after four stages.

Netflix is in production on a documentary series involving Bubba Wallace and his journey with the newly formed 23XI Racing Team, the company ...
Motoring
1 year ago

The Mexican city of Puebla will replace Mexico City on Formula E's 2021 calendar, with rounds in Marrakesh and the Chilean capital Santiago cancelled ...
Motoring
1 year ago