Lewis Hamilton back on top in Portuguese Grand Prix practice 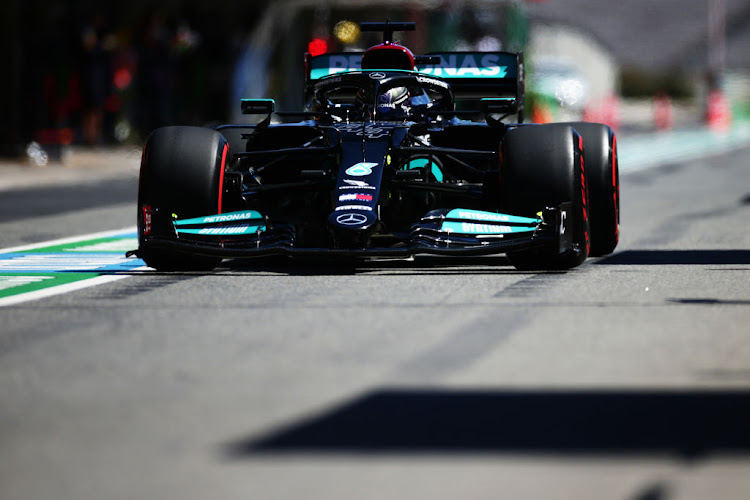 Lewis Hamilton of Great Britain driving the (44) Mercedes AMG Petronas F1 Team Mercedes W12 in the Pitlane during practice ahead of the F1 Grand Prix of Portugal at Autodromo Internacional Do Algarve on April 30 2021 in Portimao, Portugal.
Image: Peter Fox/Getty Images

Mercedes set the pace in Portuguese Grand Prix practice on Friday with Valtteri Bottas quickest in the morning before seven times world champion Lewis Hamilton led the way in the afternoon.

Red Bull's Max Verstappen, Hamilton's closest rival in the Formula One championship after two races, was second in both sessions at the Algarve circuit.

The start of the afternoon practice was delayed by 10 minutes as marshals fixed a loose drain cover.

Bottas, his car rebuilt after a big collision with Williams driver George Russell at Imola on April 18, clocked a best time of one minute 19.648 seconds on soft tyres and was third in the second session.

Hamilton, only fifth in that opening hour, lapped in 1:19.837 in the afternoon.

The Briton leads Verstappen by a single point going into a weekend at a track where last October he won from pole and set the fastest lap.

The Dutch youngster complained in the morning that the car was "impossible to drive" due to tyre vibrations.

"What a joke, mate. I can't even see where I'm going, there's so much vibration," he said over the radio. "I'll just visit the dentist after the weekend."

Red Bull's Sergio Perez was third and 0.198 off the pace after spending the early part of the opening session in the garage. He was 10th in the later stint.

George Russell, who collided with Bottas at Imola, was seventh fastest for Williams in another eye-catching morning performance by the youngster.

Four times world champion Sebastian Vettel, who has moved from Ferrari to Aston Martin, stopped at the wrong garage when he came into the pits during first practice.

"Sorry for that. It had to happen at some point," chuckled the German over the radio. "I was wondering why nobody was there."

Ferrari-backed Briton Callum Ilott took Antonio Giovinazzi's place at Alfa Romeo for his practice debut after being appointed as their second reserve earlier in the week. He was 17th fastest, with team mate Kimi Raikkonen 15th.

The Algarve circuit is hosting Formula One for the second time this weekend.

Formula One's 'Paddock Club' hospitality has gone from vroom to Zoom in the age of Covid-19 and it looks like the virtual version is here to stay ...
Motoring
1 year ago

Valtteri Bottas put Mercedes on top in first practice for the Portuguese Grand Prix on Friday with the Red Bulls of Max Verstappen and Sergio Perez ...
Motoring
1 year ago