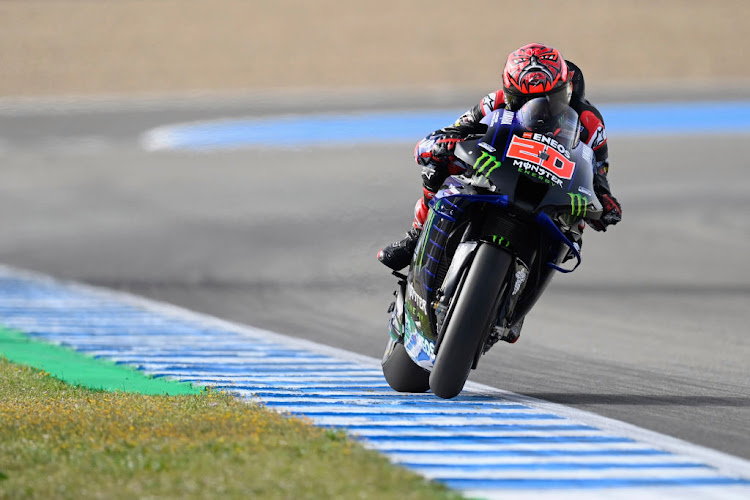 Fabio Quartararo of France and Monster Energy Yamaha MotoGP Team heads down a straight during qualifying for the MotoGP of Spain at Circuito de Jerez.
Image: Mirco Lazzari gp/Getty Images

Yamaha's Fabio Quartararo claimed a second consecutive pole position of the season on Saturday for the Spanish MotoGP and six-time world champion Marc Marquez will start 14th on the grid after crashing during the third free practice session.

Quartararo, who leads the championship by 15 points after winning two of the opening three races this season, set the early pace in the final qualifying session before securing top spot with a time of one minute, 36.755 seconds.

The Frenchman will be joined on the front row by Petronas Yamaha SRT's Franco Morbidelli, who came through Qualifying 1 to finish second, and Ducati's Jack Miller in third place.

“It was one of those qualifying sessions where I was at the limit,” said Quartararo, shortly after securing his fourth consecutive pole on the Jerez circuit.

“I made a mistake at turn 6 and I thought I was going to crash but the most important thing is we have the pole position.

“The front row was the goal and now we'll see what we can achieve tomorrow.”

Marquez, returning to the place where he broke his arm last July, suffered a heavy crash at turn 7 but was able to walk away from the accident.

The Repsol Honda rider went to the circuit's medical centre for checks, which revealed he avoided major injuries.

As a precaution, Marquez also went to hospital in Jerez for an MRI scan, before being declared fit to compete for the rest of the weekend.

Marquez failed to rediscover his rhythm in Q1, however, and was forced to settle for a spot on the fifth row of the grid for Sunday's race.

Italian great Valentino Rossi struggled with a lack of grip on the rear tyre of his Petronas SRT Yamaha and was only 17th fastest.