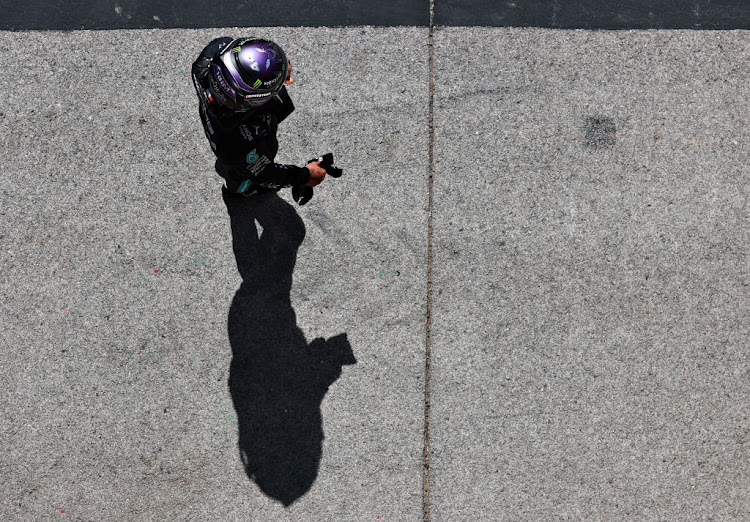 Second place qualifier Lewis Hamilton of Great Britain and Mercedes GP looks on in parc ferme during qualifying for the F1 Grand Prix of Portugal at Autodromo Internacional Do Algarve on May 01, 2021 in Portimao, Portugal.
Image: Mark Thompson/Getty Images

Mercedes expect to start contract talks soon with Lewis Hamilton after the seven-time Formula One world champion indicated he intends to race on next season, team boss Toto Wolff said on Saturday.

The sport's most successful driver is out of contract at the end of this year but at the Portuguese Grand Prix on Thursday Hamilton told reporters: “I plan to be here next year.”

Hamilton and Mercedes spent much of last year negotiating before they announced a one-year deal in February, with the season starting in March, and Wolff has said they would not leave it so late again.“I think we are in a very good place,” the Austrian said on Saturday.

“Our relationship is growing stronger every year and it's about time to really give it a little nudge and start to speak and this is what we are going to do soon,” he added.

Wolff answered 'no' to a question about whether negotiations had already started.

Team mate Valtteri Bottas, who qualified on pole for Sunday's race at the Algarve circuit with Hamilton second, is also out of contract at the end of the year with Mercedes-contracted driver George Russell a possible replacement.

The pair collided at the previous race at Italy's Imola circuit.

Asked what any decision between the two might come down to, Wolff smiled.

“I hope one day I wake up and it becomes clear,” he said on a video call.

“I think we need to look into the season, how the races unfold and then it is a judgment call, I think. Not a very scientific response but I haven't got any at the moment.”

Russell qualified 11th in Portugal in his Williams team's best qualifying performance since 2018.

The Briton, a Formula Two champion, showed his potential when he stood in for Hamilton in Bahrain last year and might have won but for team errors and misfortune.

Russell led both Friday practice sessions for the Sakhir race, qualified on the front row within a fraction of polesitting Bottas and seized the lead at the start. He also set fastest lap.

A Mercedes tyre mix-up, an extra pit stop and then a late puncture after a charge back to second thwarted his bid for victory and he ended up ninth.

Formula One's 'Paddock Club' hospitality has gone from vroom to Zoom in the age of Covid-19 and it looks like the virtual version is here to stay ...
Motoring
1 week ago