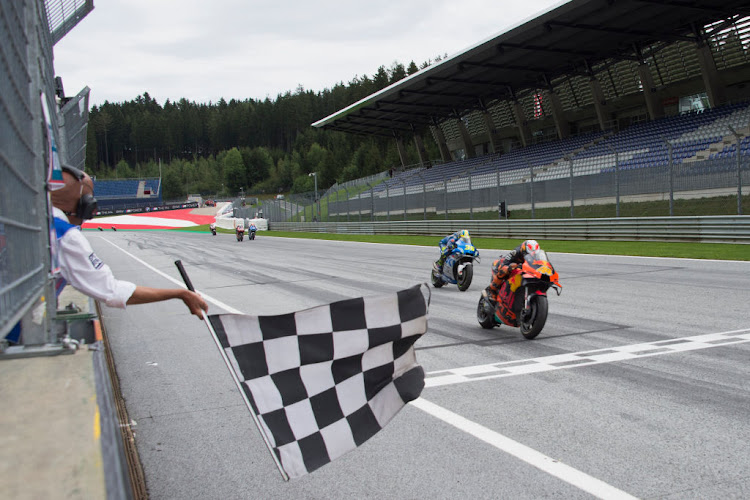 Pol Espargaro of Spain and Red Bull KTM Factory Racing crosses the finish lane and celebrates the third place during the the MotoGP Of Styria Race at Red Bull Ring on August 23 2020 in Spielberg, Austria.
Image: Mirco Lazzari gp/Getty Images

MotoGP's Finnish Grand Prix in July has been cancelled due to travel restrictions related to the Covid-19 pandemic with Austria set to host a doubleheader in August instead, the sport's promoter Dorna said on Friday.

While this year's race has been scrapped, Dorna said they had extended their agreement with the Grand Prix of Finland by five years, ensuring it has a place on the calendar until 2026.

The Styrian Grand Prix, which made its debut last year, will be held again at the Red Bull Ring from August 6 to 8, a week before the Austrian Grand Prix.

Both the Styrian and Austrian Grands Prix will allow a limited number of spectators after Dorna came to an agreement with the local authorities, but they did not specify how many would be allowed to attend.

Dorna said  both the Argentina GP and The Americas race in Austin remained postponed until the final quarter of 2021, while Indonesia's Mandalika International Street Circuit will be a backup option subject to approvals.

F1 governing body to clamp down on suspected ‘bendy wings’

Red Bull need Sergio Perez much closer to the front to put pressure on Mercedes and help Max Verstappen in his title battle with Lewis Hamilton, team ...
Motoring
1 month ago