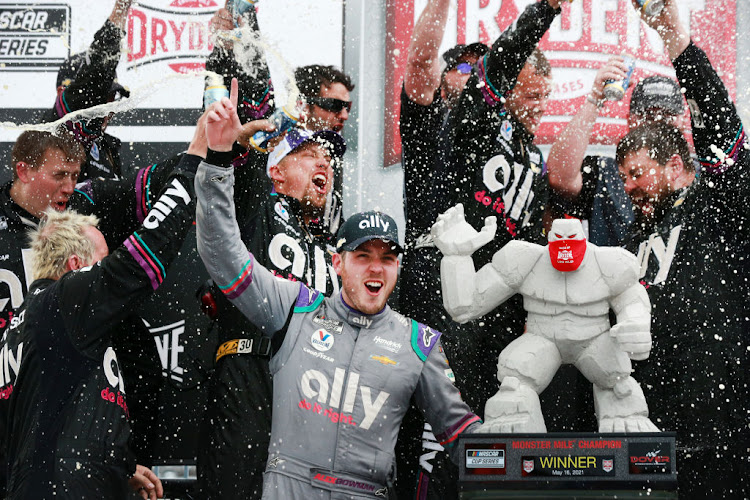 Alex Bowman, driver of the #48 Ally Chevrolet, celebrates his win during the NASCAR Cup Series Drydene 400 at Dover International Speedway on May 16 2021 in Dover, Delaware.
Image: Sean Gardner/Getty Images

Alex Bowman used a hyper-fast pit stop during a caution with 99 laps to go to take the lead from teammate Kyle Larson, and used clean air from there to win Sunday's Drydene 400 NASCAR Cup Series race at Dover International Speedway in Delaware.

The victory was Bowman's first at the Monster Mile, the fourth of his Cup career but his second of the 2021 season.

"Just so proud of this pit crew," Bowman said.

In the three races since winning at Richmond, Bowman and team had disappointedly finished 17th, 18th and 38th.

"We won Richmond and we had a really rough few weeks there," Bowman said.

"I told the guys last week that we're still the same team that won Richmond."

The win came in the same No 48 Hendrick car in which seven-time Cup champ Jimmie Johnson won 11 times at Dover.

"It feels right to put the 48 back in Victory Lane here," Bowman said.

Hendrick Motorsports' Larson finished second despite dominating the first 300 laps of the 400-lap race. He led 263 laps and the first two stages.

The margin of victory was just over 2 seconds over Larson.

"Hard to be disappointed with second," Larson said.

"I felt like I did everything I could. We led a lot of laps, won both stages so good points.

Hendrick drivers Chase Elliott and William Byron gave their team a 1-2-3-4 finish as they came home third and fourth, respectively. The Hendrick cars ran first through fourth for much of the second half of the race. The team's drivers led all but 19 laps.

"I felt like all of us HMS guys were pretty equal," said Larson, who was looking for his second win of the season.

"So it was kind of like whoever got out to the lead (and in clean air) was going to be hard to beat. Their team did just a really good job on that pitstop and gained controlled the race and I never really had a shot after that.

"Pretty amazing. I don't know the last time Mr H (team owner Rick Hendrick) has had all four of his cars in the top for but pretty special day for sure."

The last time, by the way, was never.

"This is the most nervous I've been in a race," Hendrick said.

"Great day for the organisation. This is a sign of the guys working together and bringing good stuff to the track. I don't think it will hit me to maybe tomorrow that we were able to finish 1-2-3-4. That's pretty hard to do. That's a first, and we'll take it."

Elliott was forced to start from the rear of the field after his car twice failed prerace inspection. Elliott didn't stay in the rear long as he was in the top 10 by Lap 41. He then spent virtually all of the second 120-lap stage just tenths of seconds behind leader Larson.

The top non-Hendrick driver at the end was Team Penske's Joey Logano, who finished fifth. Kevin Harvick of Stewart-Haas was sixth.

Truex, who was looking to win back-to-back races, started from the pole but started falling backward in the first 20 laps. In the final stage, things got even worse as he finished 19th, two laps off the pace.

Josh Berry made his Cup debut on Sunday, substituting for Kaulig Racing's Justin Haley because of Covid-19 protocols. He finished 13 laps off the pace.

The Cup Series heads to Austin, Texas, next weekend for its debut running at the Circuit of the Americas natural terrain road course.

Martin Truex Jnr won for the third time in the 2021 season Sunday when he captured the Goodyear 400 NASCAR Cup Series race at Darlington Raceway in ...
Motoring
1 month ago

Dale Earnhardt Jnr announced on Tuesday that his annual NASCAR Xfinity Series start will take place on the 20th anniversary of the 9/11 terrorist ...
Motoring
1 month ago

Kyle Busch held off the field after a restart with three laps to go and went on to win the Buschy McBusch Race 400 NASCAR Cup Series race at Kansas ...
Motoring
1 month ago