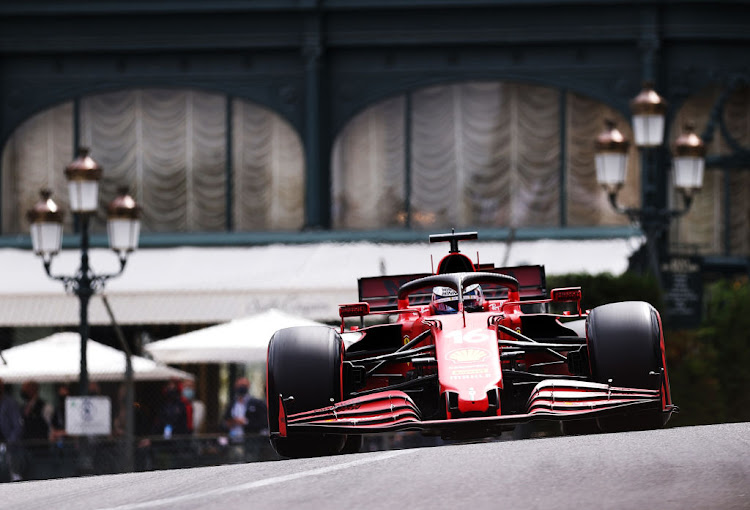 Charles Leclerc on track during qualifying for the F1 Grand Prix of Monaco at Circuit de Monaco on May 22, 2021 in Monte-Carlo, Monaco.
Image: Lars Baron/Getty Images

Ferrari's Charles Leclerc crashed on his way to taking pole position at his home Monaco Grand Prix on Saturday, with rivals unable to better his time after red flags halted qualifying for Formula One's showcase race.

The 23-year-old smashed into the barriers with 18 seconds of the session remaining and will have to wait and see whether the car can be repaired without incurring grid penalties.

"With the crash, I don't know where I'm starting tomorrow," said Leclerc.

"I'm not feeling well for now, I'm just waiting for mechanics to open the gearbox."

Red Bull's title contender Max Verstappen was one of those frustrated rivals who had to abort their final flying laps, but the Dutch driver stands to inherit pole if the Ferrari is demoted.

"It was all going really well and the red flag ruined the chance for pole," said Verstappen.

Mercedes' world championship leader Lewis Hamilton, who leads Verstappen by 14 points after four races but had struggled through the session and in practice, qualified a distant seventh.

With grid position of critical importance at a slow and twisty track where overtaking is almost impossible, and a hard slog looming for Sunday, the seven-time world champion was hoping for rain.

"We go back to the drawing board now," added the Briton. "There is a lack of grip, so that leaves you to overdrive the car and unfortunately it just didn't improve."

Mercedes boss Toto Wolff said it had not been a good day for the reigning champions.

"We need to find out why we couldn't get Lewis's car in a happier place," said the Austrian.

Leclerc was on provisional pole after the opening flying laps, 0.230 seconds quicker than Verstappen's best effort, but got it all wrong at the Swimming Pool chicane.

The speeding Ferrari swiped the metal barrier at the corner, bounced over the kerb with a broken suspension and smashed across the track and into the barrier before coming to a standstill.

"It's a shame to finish in the wall, it doesn't feel the same," said Leclerc of his eighth career pole and first in Monaco. He was last on pole in 2019.

For those who recall Michael Schumacher "crashing" his Ferrari at Rascasse in qualifying for the 2006 grand prix, ensuring nobody beat his pole time, Leclerc's looked real enough.

"Such a crash could put you in real jeopardy if the gearbox is broken," said Wolff, when asked. "It wasn't the tiniest of brushes, it was a real impact."

Ferrari boss Mattia Binotto, whose team are climbing back from a 2020 season that was their worst in 40 years, said it was too early to know whether the gearbox was damaged.

"We are worried but we are checking it," he said.

Leclerc, born and raised in the Mediterranean principality where many of the other drivers live, has yet to finish his home race, which was cancelled last year due to Covid-19.

"It's not like every day of your life you get the chance to go for a pole lap around Monaco and to not even have that opportunity on your second run is tremendously frustrating," said Sainz.

Australian Daniel Ricciardo, Monaco winner in 2018 with Red Bull, failed to get his McLaren into the top 10 and will start in 12th while two-time world champion and past Monaco winner Fernando Alonso lines up 17th for Alpine.

Mick Schumacher, son of the Ferrari great and seven-time champion, missed out on qualifying altogether after crashing his Haas in final practice.

Red Bull's Max Verstappen was fastest in final practice for the showcase Monaco Grand Prix on Saturday with Formula One championship leader Lewis ...
Motoring
4 weeks ago

Sebastian Vettel lapped the unforgiving Monaco street circuit with tears in his eyes during Thursday's second practice after something irritated his ...
Motoring
1 month ago